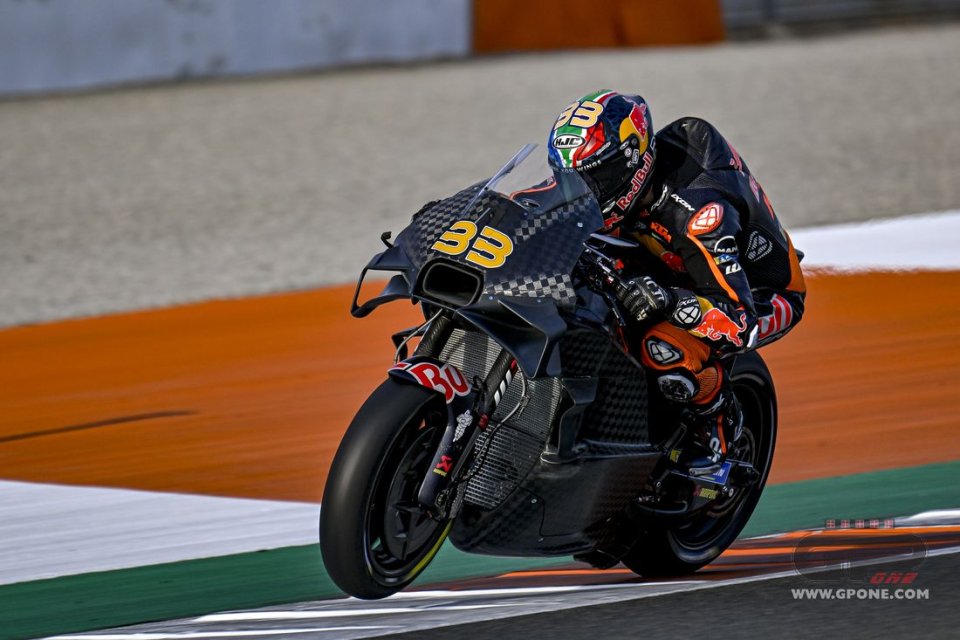 KTM is putting its foot on the accelerator in view of 2023, with many changes both technically and in the garage. As for the riders, it has almost completely changed the line-up: only Brad Binder remains among those who raced on the Austrian bike in 2022, Jack Miller has arrived alongside him, while in Tech3 (now the official GasGas team) there is the return of Pol Espargarò while Augusto Fernandez is the bet for the future.

The technicians, for their part, are working hard to improve the RC16, which still lacks something to be at the level of its more competitive rivals. The Valencia tests saw a first step in this direction, with a hybrid between this season's bike and the one to come.

“There were a few new parts everywhere, in the chassis, in the engine, electronics updates and we also tested a new aerodynamic package - explained team manager Francesco Guidotti to motogp.com - We need to improve, our project it is still young and we are working hard in all areas”.

The winter will be decisive for putting the finishing touches on the bike, which the riders will only be able to test in February, at Sepang.

“There's plenty of work to do: this week we'll go to the wind tunnel and we have two more tests in Jerez, in November and December, with Dani Pedrosa and Mika Kallio. In December it will be the time to make the final decision for next year” explained Guidotti.

The manager also recounted the first sensations of the new riders at Valencia: “Pol Espargarò looks like he’s pretty happy, he felt immediately the confidence and the feeling. With Jack Miller we are doing a very calm and progressive job, nothing special or nothing wrong, he has to get used to everything after many years with a different manufacturer".

KTM already in 2023: Pedrosa in Misano on the prototype of the new bike

THE 2023 CALENDAR The Suzuka 8 Hours, valid for the FIM World Endurance Championship, will take place in 2023 one week later than originally planned...
4 sec ago

The FS-3 Racing Kawasaki team continues to focus on young riders in the British Superbike. With Rory Skinner in the Moto2 World Championship, 19-year...
10 hours 11 min ago

His wife posted about his condition: “He is okay and in the best place possible. They will keep him in for a few days to monitor him.”
19 hours 22 min ago

Peter Oettl merges with Intact GP. The Swedish brand Husqvarna will race in Moto2 with Darryn Binder and Lukas Tulovic and in Moto3 with Ayumu Sasaki...
1 day 23 hours ago