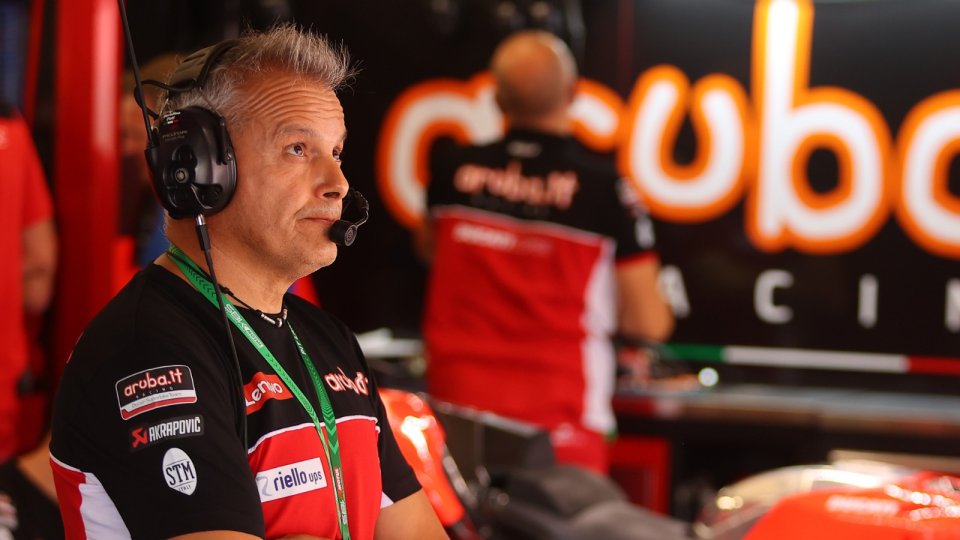 Serafino Foti has finally been able to celebrate the conquest of the riders' title in SBK together with Alvaro Bautista and all of Ducati. After Carlos Checa, in fact, it was another Spaniard who took a Borgo Panigale bike to the top of the world of production-based racing and Foti, the Aruba Ducati Team Manager, played a very important role throughout the growth process that made this result possible.

We had Serafino as a guest of our LIVE dedicated to SBK, talking with him about many topics, from the celebrations for the world championship triumph to the words of Rea and Razgatlioglu, who have pointed a finger at an alleged advantage of Ducati in SBK, up to the decision to confirm Rinaldi in Aruba Ducati leaving Bassani in Motocorsa.

Are you still celebrating?

"We started celebrating in Mandalika, but when we return to Italy there will be lots of events! It was a great satisfaction, we never gave up and this result compensates for all the efforts made. It was a memorable year for Ducati, so my congratulations go to everyone. We are proud of this. But even here in Phillip Island we want to do our best, starting tomorrow we will forget about the festive atmosphere, and concentrate on doing well in Australia".

Did you have some difficult moments in your SBK adventure with Ducati?

"More than difficult moments, because in racing you actually have to be able to overcome them all, I call them difficulties in general. It is clear that since 2011, since the last Ducati title, we were, I don't say, obliged to win, but without a doubt we had the burden of achieving this goal and we never achieved it. It was a long journey and this makes living in the present even better. I would say it was a long wait, but not a difficult moment, because we have always worked well, all in the same direction" .

The next step is also to win with the other Ducati riders in SBK.

"We're working towards this, but in my opinion this year Toprak, Alvaro and Jonathan were playing a different sport than everyone else. If we look at the times in the race, the level has risen a lot. It's obvious that the difference right now is made by Bautista, because his riding characteristics adapt perfectly to our bike. But it must be said that Yamaha and Kawasaki have only won with Toprak and Rea. In the past we have won with Redding, Davies, Rinaldi. Our bike adapts better to everyone, but obviously we would like to have all our bikes in front of everyone else. In any case, Rinaldi is 4th and Bassani 5th in the world championship, so we did a great job with them too".

What about the possibility of the decision to penalize Ducati in 2022 by cutting more engine revs?

"For me, we should only say hats off to Ducati, which has built an incredible road bike. Other manufacturers can also adopt the same philosophy. I can't think that a production bike has 4 or 500 revs more than a racing bike. Now the road bike has 16500 rpm, ours does 16100. What else do they have to take away from us? I hope it doesn't happen, it wouldn't be fair to our road bike, we are the only ones with an engine that revs lower than the road equivalent. it's the best way to balance the championship. If we've worked well, the others can do it with a major effort. Rea won 6 world championships in a row, then last year Yamaha won it with Toprak and we never complained about that, we just tried to learn."

Bassani could have made it to the factory team, but he will stay with Motocorsa. Will your support change?

"Axel is doing an incredible championship, he's been very good and I congratulate him. We know the conditions he's racing in, there is a lot of support for him. He has a bike that is virtually 98% similar to ours, our engineers share the data with him. I don't know how much more support he can have within a factory team, he already has so much. Even in MotoGP, satellite teams like Pramac and Gresini are often ahead of the factory riders, because the philosophy they adopt in MotoGP is the same as the one used in SBK. We will continue to give him maximum support. We chose Rinaldi because we think it is right to give him another year of opportunity because he remains first in the standings after Alvaro, Toprak and Rea. Then Alvaro and Michael also ride in the same way, and this is very important for development. There were many combinations that led us to continue. It being understood that Bassani remains a rider who interests us very much, he is young and will have his chance ".