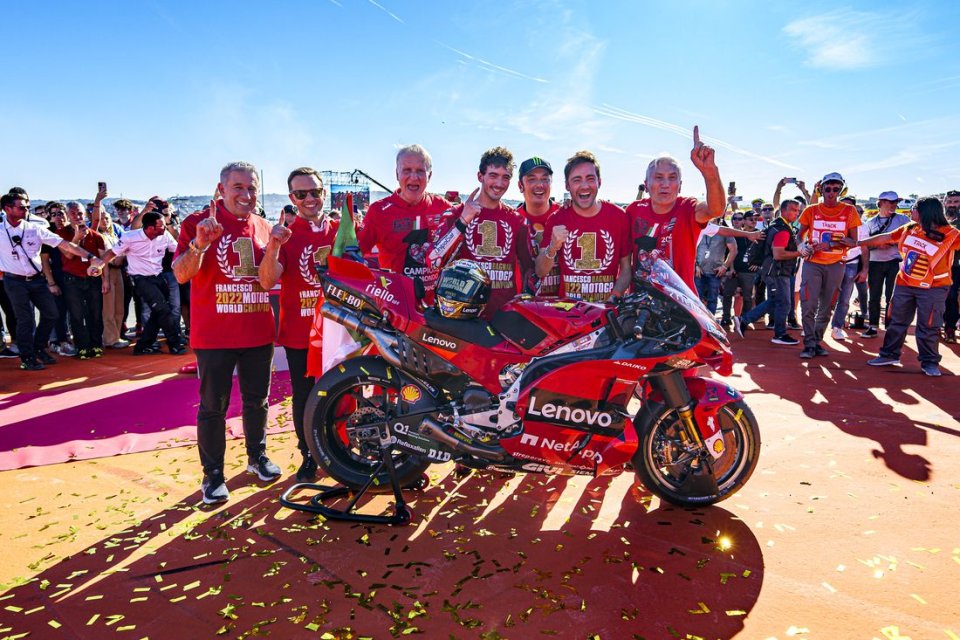 Bagnaia's MotoGP title victory was a celebration for many. For Ducati, for the Italian fans and also for the VR46 Riders Academy, the school for riders founded by Valentino. Pecco is its spearhead and Rossi and his collaborators had bet on him in unsuspecting times.

Alessio 'Uccio' Salucci remembers well the first time he met him: “We were at Brno. He had a broken arm, he was dejected: I suggested to him to enjoy himself more and he looked at me as if I were crazy: how could he do that in a season with few results and in which he also got hurt? - he smiles - A few years later we talked about that episode and he confessed to me that I had somehow touched him ".

The thing was mutual because, in 2014, when Rossi and his men decided to create the Academy and the team in Moto3, Bagnaia's name was at the top of the list.

“We had no doubts: we wanted to bet on him - continues Salucci - He was coming off the back of a difficult season, but I knew he wasn't in the best technical situation and he had been very fast in the past. So I called his father Pietro, we met secretly in the middle of the trucks in the paddock, and I told him that we were also creating our Academy: he signed it right away, a 3-year agreement".

Bagnaia was the first 'foreigner' in the school. While the other riders lived nearby, he moved from Chivasso, still a minor.

“He espoused our cause, put himself in our hands and did everything we told him to do - Salucci recalls - Other riders only took the positive aspects of the Academy, without wanting to commit themselves every day. Pecco, on the other hand, wanted to come and live near us, 500 kilometres from home, when he was still a minor, he didn't even have a driving licence".

There is one particular anecdote that illustrates the character of that boy well: “He lived in Pesaro and I would go to pick him up by car to take him to Tavullia, but I didn't always succeed. Then, at a certain point, I started to see him always arrive on time, whether he was at the office or at the ranch, without him calling me. He couldn't afford a taxi at the time, so he arranged for a friend to take him in his own Fiat 500 and Pecco paid him 5 euros for petrol. These anecdotes explain how much he wanted to pursue his dream, even when there were difficulties ”.

Pecco was still a teenager, now he is almost a man, but in a certain sense he has always remained the same: “He is a lord, very precise and as good as gold. When we go to eat together he makes me smile: I see him remove the parsley from the spaghetti, when maybe the day before I had seen him fighting hand-to-hand with Marquez on the track. So I wonder if he is the same person” said Uccio amused.

Bagnaia entered the Academy mentality and also managed to create a strong bond with Valentino.

“They have a relationship that goes beyond the workplace. A great friendship has also developed between their companions, Francesca and Domizia, and they often go to dinner all together - explains Salucci - Pecco is very mature for his age and you can talk to him about everything, he is curious, they get on well together. When he says he always calls Vale for advice, it's all true. I always urge our guys to call Vale, to take advantage of him, in the good sense of the term, now that he's freer and Pecco always does it. These riders grew up having Vale as their idol, once they grow up it's easy to walk away, instead it's a sign of intelligence to continue to use all of his experience, it's a huge added value for them ”.

How does Salucci see Bagnaia's future? “Confirming what you’ve done is always very complicated, but I see a lot of solidity in him and in the group around him, I know that Pecco is already thinking about the future. This year he never gave up even when he was 91 points behind Quartararo, it means having the right attributes, and it will be difficult to move him from the point where he has arrived. Next year he will be the man to beat” came the straight answer.

This is the last act: the Suzuki Racing website closes. It is unclear why Suzuki does not want to turn it into a page commemorating the many...
3 hours 37 min ago