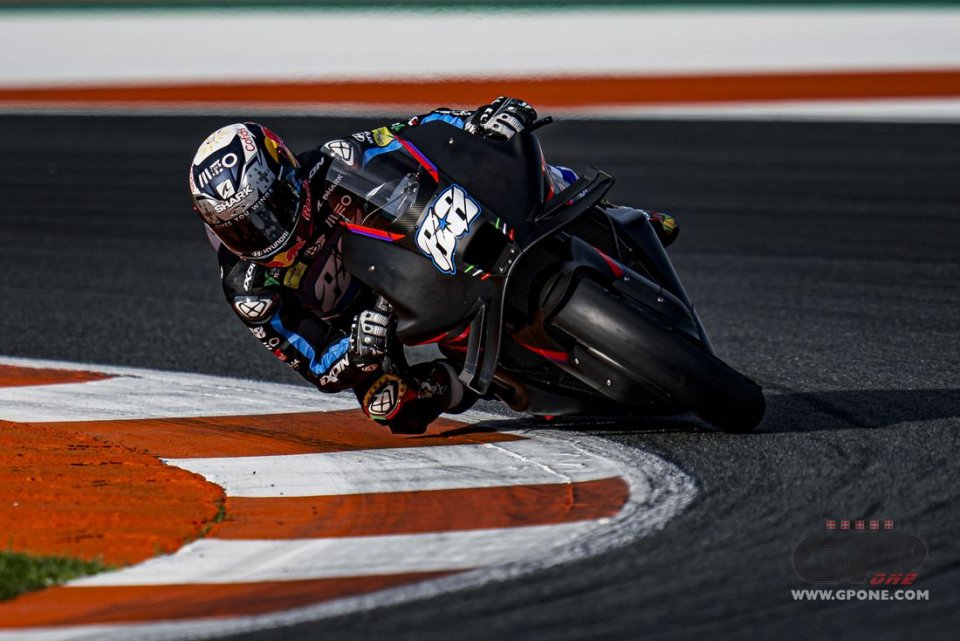 If the expression ‘first impressions count’ is anything to go by, then in the Valencia tests love blossomed between Miguel Oliveira and Aprilia. This is confirmed by the classification, which saw the Portuguese rider in fourth place, clearly the best among those riders who have changed bikes.

Oliveira, on his first time on the RS-GP, completed 75 laps and at the end of the day bolted on a new soft tyre for the time attack. The result was a time of 1m30.367s, just over a tenth slower than that of Vinales. It is also interesting to compare it with what he did in qualifying on the KTM: because Miguel was 14th with a time of 1m30.236s. Irrespective of a very rubbery track after the race and a full day of testing behind him, running less than a tenth and a half from what he did on a bike he knew like the back of his hand is an excellent result.

Unfortunately, for contractual reasons, the Portuguese rider was unable to comment on his debut on the Veneto manufacturer bike. RNF team manager Wilco Zeelenberg took his place.

"Miguel set his time with the soft tyre, but it's nice to see him up front and he certainly still has room for improvement, it looks promising," said the former Dutch rider.

What did Oliveira particularly like? "For Miguel the ability of the bike to absorb the bumps and how easier it is to ride, while for Raul Fernandez the sensations the front gives, because it was where he struggled with the KTM" Wilco replied.

Both Aleix Espargarò and Maverick Vinales had shown that Aprilia was a competitive project during the season, but having a counter-check with two other riders is very important. In fact, there were a lot of Aprilia men in the RNF garage in Valencia, including Massimo Rivola.

"When a rider switches from one bike to another he can give a lot of information, both positively and negatively, but he remembers the weaknesses and strengths of the previous one only for a few days - explained Zeelenberg - So it was important to understand where the Aprilia is better or worse”.

One thing struck Wilco: “The RS-GP looks low and big from the side, but the tank is very small. It is a very nimble bike, especially when changing direction, it almost feels like a 250 ”.

So, the first outing was good, not only for the feelings of the two riders, but also for the team.

"Communication is easier, the Italians don't speak English very well but the Japanese are even worse - joked the team manager - In the end we understand each other better, it's a different culture and everything is quicker".

Oliveira explains why he left KTM: “Some trains only pass once”

All this probably stems from the purchase of a van in Andorra a dealer says Hector never paid for.
6 days 8 hours ago