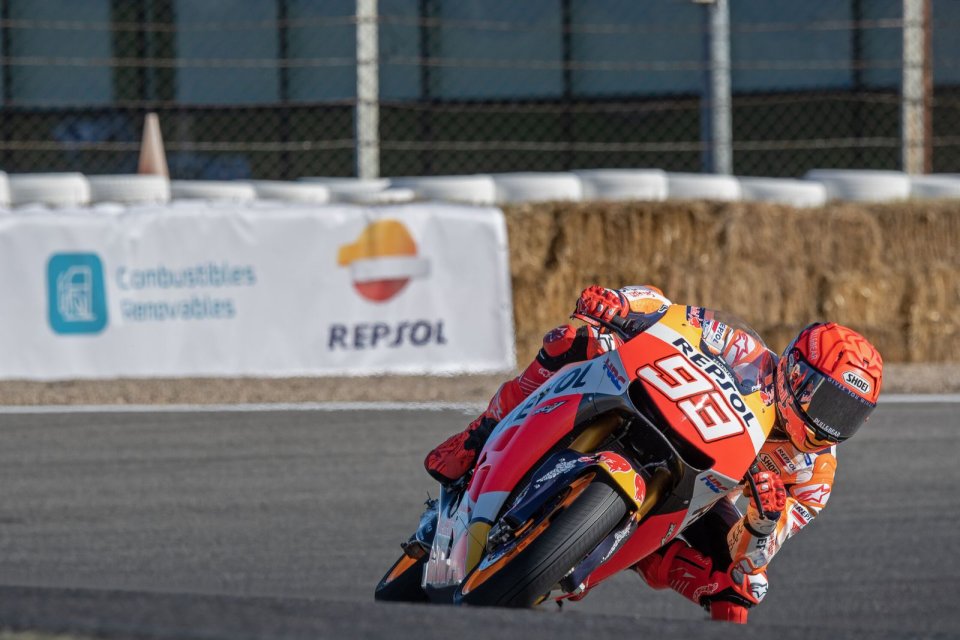 Although the official post-GP tests at the Ricardo Tormo in Valencia only ended a few days ago, as expected Marc Marquez is already looking forward to next season, probably more specifically to the first tests of the new year at the Sepang International Circuit. But first, yesterday, the multi-champion from Cervera got on the RC213V-S (the road version of his MotoGP) at the Jarama circuit to test a renewable fuel created by Repsol at the Technology Lab, with the aim of keeping performance unchanged on the track by reducing CO2 emissions.

An advanced biofuel was added to the tank of the bike which guaranteed the Honda rider the same performance obtained with a traditional fuel. For the multi-energy company, this test therefore represents yet another step forward to bring renewable fuels to the racing world without affecting performance. The test served to verify first-hand Marquez's impressions, so that HRC engineers and Repsol researchers can optimize the fuel in view of the deadlines set by MotoGP, which envisage that from 2024 the top class will have to use a minimum of 40% of fuel of non-fossil origin, reaching 100% by 2027.

"The truth is that I'm a bit surprised because every time you try something for the first time there are little things, but if they don't tell me I don't even notice. I noticed that it works well - Marquez told our colleagues at AS - The performance is very good and if they hadn't told me that there had been changes in the fuel I would not have noticed. Logically the first comment is always that of the rider and it is important to see how the engine is going, so that it is clean under acceleration. It is often the most critical moment. We need it to be fluid, as in this case. "

From biofuels to electric bikes it would seem like a short step. Maybe Marc will end up by riding them.

"I hope to continue to compete for many more years. I hope that the research on renewable fuels is a success and that this engine is maintained, I like the noise on the straight and the smell of gasoline. In that case I think it could be a good future ".

At the same time, Marquez referred to the technical difficulties of HRC highlighted in the Valencia tests, where he was very critical.

"We have to try to be in the fight for the title, but at the moment we are still in the phase of understanding what we will have in Malaysia. In Valencia there were precise tests where comments were given. Honda must continue to work to develop the bike and have a competitive package. Angry? No, otherwise there is a risk of panic. Honda is working hard. The reaction of the engineers inside the garage is good and they had already told me that a small step would be taken in Valencia and that would have brought, in theory, few things, but that the most important developments would have come in February, when the last step will be seen. I have 100% confidence in Honda, anger does not work in these situations. I want to win again with them".

What do you think of your brother Alex's debut on the Ducati?

"He has already shown in the past that, if put in the right conditions, if he adapts to the project and the bike, then he can give his best. He did it in both Moto3 and Moto2, winning in both categories the world title. Just like in MotoGP, scoring podiums in his first season like few others. After the Valencia tests we drove together by car and the smile did not leave his face. But he didn't say much. This winter we will help each other in training to get the best prepared as possible for the new season. Even if he will have his secrets in the garage and I will have mine ".

"It's just that when I had my arm rotated 34 degrees I was optimistic, and optimistic I always am and this is the way to face the winter. It's the first winter in three or four years without injury."

How did you see Mir and Rins instead?