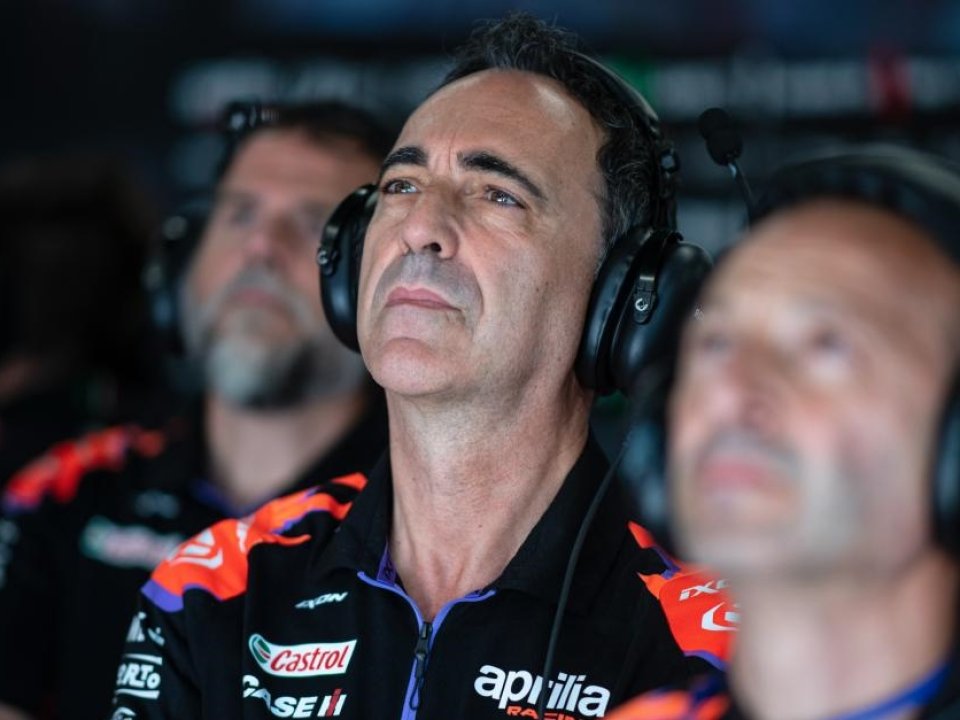 2022 was the turning-point year for Aprilia, which - against all odds - cherished the dream of winning the World Championship with Aleix Espargarò until the very end of the season, coming close to third place in the championship. A sensational season, which however leaves a bit of a bitter taste in the mouth due to the missed opportunity.

"Maybe it is still a bit early for this sort of dream, but we are on the right path to make it happen - commented the technical director of the Noale manufacturer, Romano Albesiano - I honestly think it was a bit premature as a goal, but it was real. If we had achieved that result, no one could have contested it: we would have deserved it. Someone else deserved it more, so that's okay. The important thing is to have made a truly remarkable growth and to be there to fight for it ".

The Veneto team was rewarded above all by the consistency of performance of its riders, which allowed captain Aleix Espargarò to reach the top of the championship standings at the beginning of the season, conquering Aprilia's first historic success in MotoGP in Argentina, and then achieve four consecutive third places, between Portimao and Mugello. An impressive pace which however began to slow down at the British GP. How much did the psychological factor affect Aleix's season?

“He was in fantastic condition until Silverstone. On a character level he is one who never gives up, but it may be that that crash at Silverstone undermined everything a bit, and the energy dropped a bit - Albesiano comments - Moreover, he still did some great races, like Phillip Island, where there was some inaccuracy on our part in the settings. But he still came within 4” of the first. He kept a very good level until the end. I think it's good for us that the season is over, to recharge our batteries and leave Sepang next year with 100% battery. I think we will see the performances we have seen in this 2022 again”.

An exploit that took the whole team by surprise, which was not prepared to experience an entire season at the highest level.

“I think it was a challenging first time for Aleix, in terms of mental energy - explains the technician - He also said that it is not easy: there is a certain kind of media attention, a pressure that you impose on yourself, such a prestigious goal close at hand ... It is not easy. He wasn't used to it and we weren't used to it as a team, but it's a bit more difficult for the rider. "

The improvement of the team was also highlighted by the growth of Maverick Vinales, who began to find the right feeling with the RS-GP.

“He is no longer riding it like a Yamaha: he found strengths in our bike and also weaknesses, but he started to manage them in the right way. He had already taken this path in the middle of the season and the results were seen - says Romano - Then, he too had a slightly less positive phase, which we all had a bit, especially in the non-European away races. But in Valencia he was very bright again and rode well, even though he had a fever. I see him looking good for next year. I also see him mentally strong, I see him all fired up. I'm positive ".

Year after year, MotoGP continues relentlessly in its technological development, but hasn't it become a bit too much?

“I witnessed motorcycle racing of the ‘90s, 500 cc, then I see this motorcycling here and it's a completely different world. The engineering that has been created in recent years is very high. It is not yet at the level of F1, but that is the way it’s going and perhaps it is also a bit too much - admits Albesiano - As an engineer it excites me, but as an enthusiast I think it would be nice to be able to take a few steps back. And if you think that racing is done to try new things from a mass production point of view, then I wonder how many of the solutions we use here can really be brought there too. Perhaps the work that is done for racing should be recalibrated, to make it more oriented towards the development of series production bikes. Because, actually, a good part of the work we do now is purely aimed at the sporting result ”.

"We are discovering the aerodynamics applied to the bike now, but in my opinion this is a subject that can also benefit the production product and its safety, because aerodynamics make the bike safer. So, in my opinion, going back on this front would not be right - continues the Technical Director - Then it can be argued that such stable bikes, that wheelie very little, and with such an increased braking capacity, make the races less spectacular, but that's another story. This is possible, in part ”.

After the development of aerodynamics, lowering devices, and engines, which have become increasingly efficient, what could be the area where there is still a possibility of growth?

“The tyres continue to be fundamental - explains Albesiano - The most difficult and in some ways 'obscure' part is the ability to make the best use of a given tyre. Then, as regards aerodynamics, since there is still a lot of know-how to build, even for our top-level specialists, there is still a lot to do. The rest is about optimizations. This does not mean that there can always be, despite everything, something different that makes the difference. We hope one day to be able to bring it. Then, certain things about the bike's dynamics, which give or don't give a rider feeling, make a huge difference and simulating them is still difficult, so this is another field in which it is possible to make a difference ”.