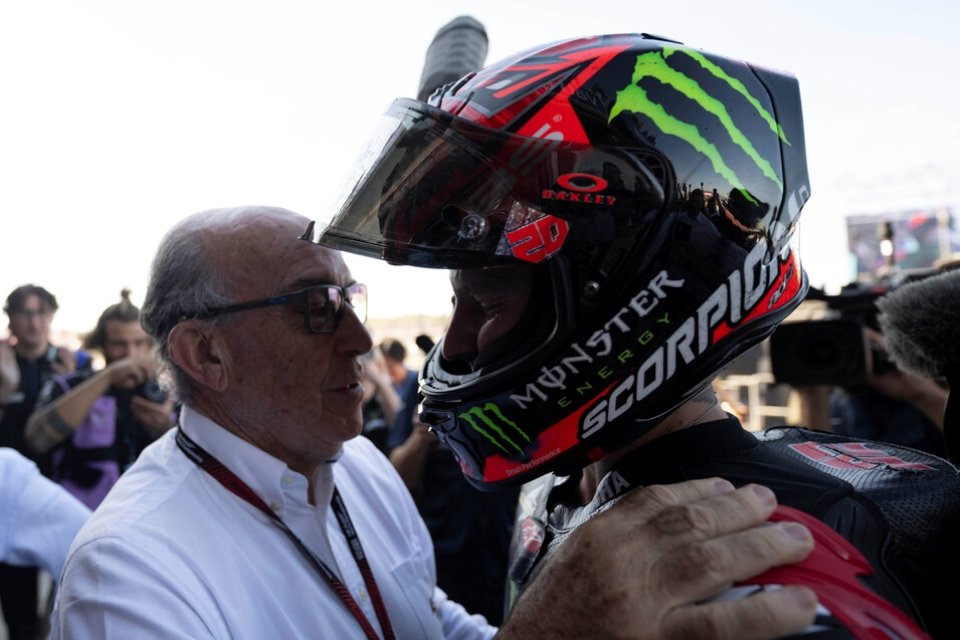 Fabio Quartararo tried his best, but in order to continue hoping to win last year’s title again, the Yamaha rider would have had to conquer  a victory that was never within his reach. El Diablo did everything possible, bringing an M1 that was having difficulty with the front tire to the foot of the podium of the Valencia GP.

“The start was good. One of my best. Even better than Sepang. But I couldn’t get a great first lap. I touched Miller, who made me go wide. Also, it was warmer today than yesterday, and I was really at the limit with my front tire. I couldn’t do better. I have no regrets today. I gave it my all,” Fabio said, explaining the nature of the problem. “It wasn’t a tire pressure problem, simply the compound was too soft and, fortunately, it was harder on the left this year. In my opinion, they’re bringing tires that are too soft on this track. Also because, year after year, it’s getting hotter and hotter. It was twenty-six, twenty-seven degrees today. That’s why we always use the hardest tires here. In the FP4. I already felt the tire was at its limit on the left side.”

The stakes were high, but the French rider was ready: “I was more stressed yesterday than today, because I knew that qualifications were very important. I wasn’t very nervous today.”  Quartararo isn’t looking for excuses, but  seeing the glass half full is difficult, knowing that, until mid-season, Bagnaia had a 91-point gap.

“After Pecco and I touched, I wanted to give it my all, but I was really at the limit in that lap. I was practically at the end of the race, but I have no regrets,” he said. “When you lose the title like this, you always have to try to find the positive aspects, even if ninety-nine percent for me is negative now. That one percent is what, in the four months I’ll have to wait before the next race, will give me even more impetus to train and fight even harder.”

The weekend in Valencia was undoubtedly an intense one for the Yamaha rider, who can’t do anything now but start thinking about next season.

“After the race, I felt a lot of emotions,” Fabio said. “I’m a fighter, a winner, and I want to be in first place, so the first fifteen minutes after the GP were difficult, but it’s time to close this chapter and start a new one starting with Tuesday’s tests.”