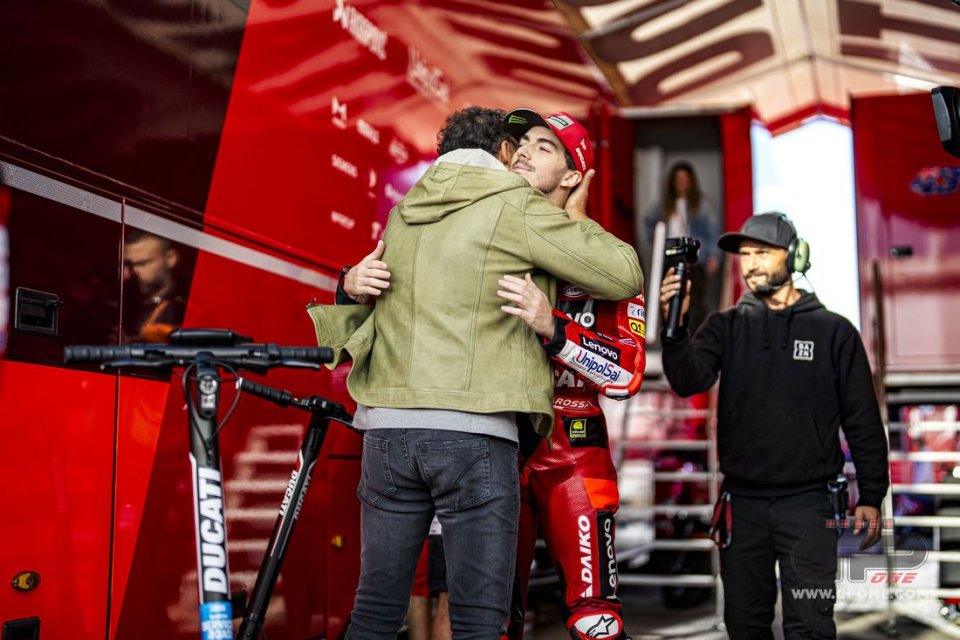 “I need to breathe,” Pietro Bagnaia, Pecco’s father, said as he experienced 27 laps holding his breath. He suffered with his son, watching him from the sidelines, turn after turn. When the race was over, he could barely speak. He found some peace of mind a few hours later, with a smile on his face that was worth a thousand words.

You’re now the father of a MotoGP World Champion.
“I believed in it. My heart was always with him, trying to be his shoulder when he needed it and applauding him when he was happy. This title is an accomplishment, and I still have to enjoy it, understand it, but I’m proud. He and the team have managed to overcome so many difficult moments together. What can you say to people like that?”

He achieved the title on an Italian bike, after 50 years, like Agostini.
“I love sports and good feelings. I’m speechless when I hear Agostini mentioned.”

How much did you suffer today?
“A lot. I always watch the races with my son, Filippo, because we’re the same. We don’t talk much, and we’re very attentive. It was long. When I saw a winglet fly off, I was worried. It was a race in defense, but it went very well. He handled everything perfectly.”

Was it difficult to be with him from the beginning to this moment?
“I’ve always said the same thing. I never thought for a moment in my life that supporting him was a sacrifice. When you’re dealing with a son who dreams, it can’t be. It’s as if he were graduating in medicine or taking any other path.”

Did you always get along?
“It’s normal for a father and son to argue once in a while. When he was a kid, he was overactive. You had to chase after him, but he never did anything major. Now I don’t even try chasing after him,” he said laughing.

He was very young when he left Chivasso to move to Pesaro to Valentino’s Academy.
“I have a younger son, and I’m trying to send him to study in Canada or Australia. It was the same with Pecco, especially in 2013 when he entered the World Championship. He knew he couldn’t train in Turin on motorcycles like the other riders. So, despite his mother’s palpitations, he decided that this would be his life. Now he’s lived far away for many years but, living near the sea, we like to go visit him.”