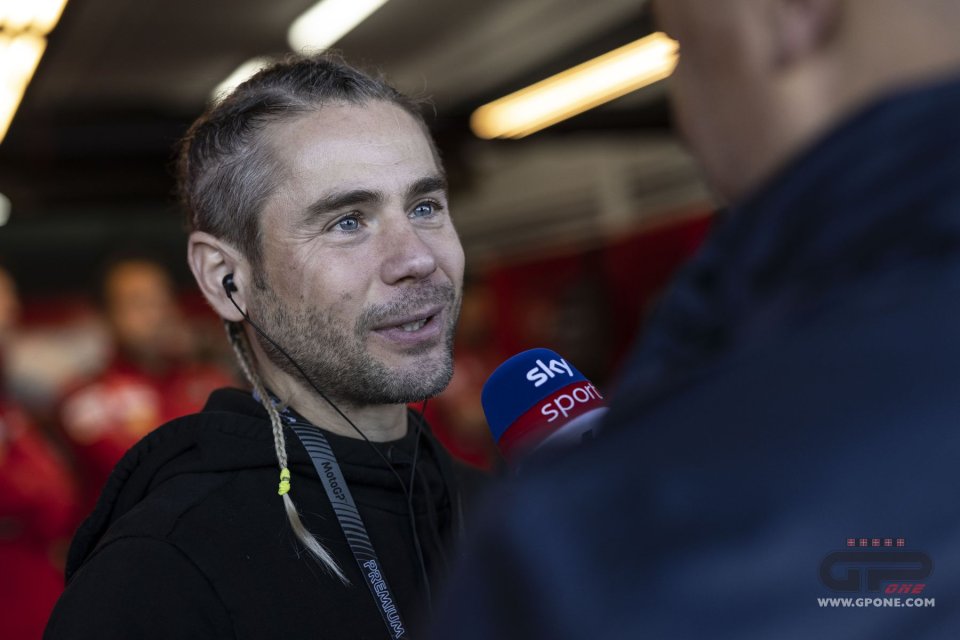 Alvaro Bautista came to the Valencia paddock to perhaps get a taste of what awaits him in Mandalika in the next round of the SBK world championship. Bagnaia is in fact experiencing a special weekend, with the possibility of becoming world champion and the same thing will happen to Alvaro in Indonesia, where he could fulfil the dream of bringing back the world title in the SBK world championship that has been missing since 2011, with the magnificent feat of Carlos Checa and Althea.

We met him in the paddock, an environment that the Spaniard knows very well having spent most of his career in the world championship. The look as always intense, the smile on his face and the desire to soon experience the sensations that his brand mate Pecco is now experiencing.

"I haven't been in the paddock for 4 years, but I felt good. I said hello to many friends I hadn't seen for a long time, then I'm doing more interviews now than when I was working here, lots of photos. I feel very good. I found very little change in the paddock, it is clear that it is very different from the SBK one but it is still the same".

How did you see this MotoGP season?

"I saw Pecco at the beginning not doing very well, he was not happy with the bike. Fabio instead made the most of the package he had, then things changed. In the end they are very close, but in very different ways. Pecco I think that today he has a better package than Fabio's. The world championship is being fought out, now for Pecco it is easier, but the good and the bad of the races is that up to the chequered flag anything can happen, so you have to stay focused and make no mistake. I think both of them made the most of what they had and that in the end both deserved to fight for the world championship ".

Next week you will experience sensations similar to those of Pecco today.

"It's nice to be in the front. Now that I'm here without having to race, I realize many things, of course there is tension but also a lot of positivity and you feel this a lot. It is nice to experience this condition knowing that next week I will be in place of Pecco in some way ".

We say it in a low voice, but Ducati could win both world championships. How do you feel?

"There is the possibility of winning both world championships, this is the truth. It has to be natural, it is pointless not to talk about it. Ducati has managed to make its MotoGP an easier bike for everyone, and I think the same thing it is doing in SBK. In 2019 I was the only one who was strong, now the others are approaching and they are all fast. We have found a balance with the Panigale V4, now it is competitive and already easy. I think it is the result of a great job and it would be fantastic to win both world championships. I think winning a world championship with Ducati has a different value, here there is real passion. I am proud of the work we are doing. Now I just think about being concentrated. "

Do you think these prototypes are still similar to the ones you knew?

"In the end, we riders always want to improve and the manufacturers want to do the same thing with their bikes. Now there is incredible technology and perhaps with all this technology that is there and the impossibility of real development of the bikes after Covid, the bikes are closer to each other. When there is a lot of technology, the rider has less chance to do things. The limit now is the bike, not the rider. I understand that the manufacturers want to make the best bikes possible, but I think this leaves less room for the rider. With the two strokes there was more difference between good and less good riders. Now it is much more difficult to understand the difference between the various riders. Nice on the one hand, but on the other you take away the importance of the riders ".

Will you ask to test the Desmosedici if you win?

What can you tell us about the controversy with Redding regarding the minimum weight?

"In the small categories I understand that there must be a weight limit. The bikes are lighter, there is not a lot of power and you don't need too much strength to ride them, so I find it sensible as a rule. But in MotoGP and SBK things change. We do not always use 100% of the power, so I don't think it is right to put a minimum weight on the bike/rider package. It is clear that we small riders have some advantages, but we also have disadvantages. We little ones must have great technique, we do not have much strength to do certain things, we cannot put weight where we want as a taller one does. If I move on the bike, I change very little the weight distribution, it is different for a tall rider. On the straight, ok, but we are all at full throttle. Then I learned with the two-strokes that aerodynamics is essential, having the right position on the bike. If it were true that weight and height were everything, then it would be normal to choose only small riders. It would be sufficient to take small and light riders and that's it. Like in the NBA, I can be as good as I want but they want players over two meters tall there. Here in MotoGP in the past we have seen tall riders like Valentino Rossi and other small and light riders win. For me, the idea of ​​minimum weight with this type of bike makes no sense. Scott had his moment of glory in the season and so congratulations for him."

In MotoGP there is real development, in SBK if you don't have a good base it's different. What do you think?

"Yes, it's true because MotoGP already allows development. With SBK the bike derives from the road bike. To fight in SBK, Yamaha must make a bike that is competitive on the road, like Ducati did. Anyone who buys the Ducati Panigale V4 knows that it is buying the top of the top. The others if they want to compete in SBK on an equal footing have to make an equally good bike on the road. In MotoGP it is different, you can change many things, from the chassis to the aerodynamics. In SBK you can do less, I experienced this with the Honda. Maybe that bike was not born competitive right away and it was difficult to make progress. SBK is a more difficult championship if the base of the bike is not competitive. "

What do you expect from Mandalika?

"At Mandalika it will be the most difficult race of the season. I have never ridden there with the Ducati; last year we did a few laps in the rain. Then they resurfaced it all, then the weather is difficult to predict. I have to work to my best and do my best. I don't go with the intention of thinking too much about the calculations, I want to do the best I can and that's it. If I can fight for the win I will do it, if I understand I can fight for 5th place I will do it ".

Was this your best season as a rider?

"I think that as a feeling this has been my best season ever, I'm having fun, I'm understanding the bike, I take the maximum and make few mistakes. It is the most complete season of my career, I would say yes."