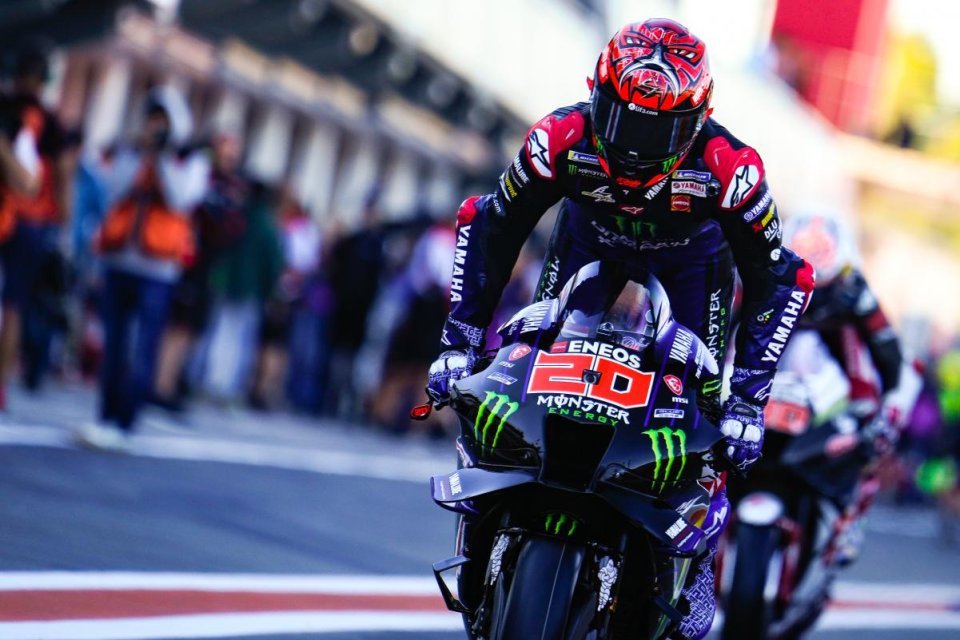 Win! That’s the key word for tomorrow’s Valencia Grand Prix. Fabio Quartararo knows this well, because there are no other solutions in his favor to try to reverse the World Championship challenge, so he’ll be forced to climb to top step of the podium and then hope for Bagnaia to fail.

At the end of Saturday, the French rider finished in fourth, while the Ducati rider didn’t go beyond an eighth time.

“I’m really happy with what I’ve done,” he began. “I think it was one of my best starts of the season. Yesterday, we started doing a good job in the FP1. The electronics are also behaving well. We also had excellent sensations for the race pace. I knew the fast lap would be the biggest obstacle.”

Quartararo needs a miracle for tomorrow.
“All I think about is winning and fighting for the victory. If I win, maybe I can think of something else. Certainly, we started off on the right foot here in Valencia. Moreover, the choice of tires is quite clear for the race. As you well know, it’s been since Germany that I haven’t fought  for a win, and I want to try to the very end. I’m really confident. Obviously, some things need to be improved, like turn one, but I’m confident.”

He explained the reason.
“We know exactly what the problem with turn one is. In the last sector, I lose a lot more than the other riders in terms of grip and then suffered in terms of maximum speed. I try to do my best, but it’s not easy.”

The French rider knows what he wants.
“Tomorrow, I know I can do what I want because I have nothing left to lose. Last year, I was very nervous before Misano, but now the situation is different. I know I need to be aggressive in the race but, at the same time, intelligent, taking into consideration the wear on the tires. I’ll definitely try to attack and be aggressive from the start.”

El Diablo then takes stock of his 2022.
“At the beginning of the Championship, we were competitive, and we won several races. But then there were several mistakes on my part and on the part of the team, but I’m still happy no matter how it ends tomorrow.”

He’ll be starting from the fourth box, and Bagnaia from the eighth, but he doesn'’t care about that.
“I just need to focus on myself, since we’re in two completely different positions. I don’t care what Pecco does. All I have to do is think about myself and win. I have a goal in my head, and I don’t want to spend my energy thinking about anything else.”

Quartararo ends by talking about the problem with his finger. He was hoping to make a change to the M1.
“I wanted to invert the holeshot with the clutch. Unfortunately, that’s not possible,” he said smiling.