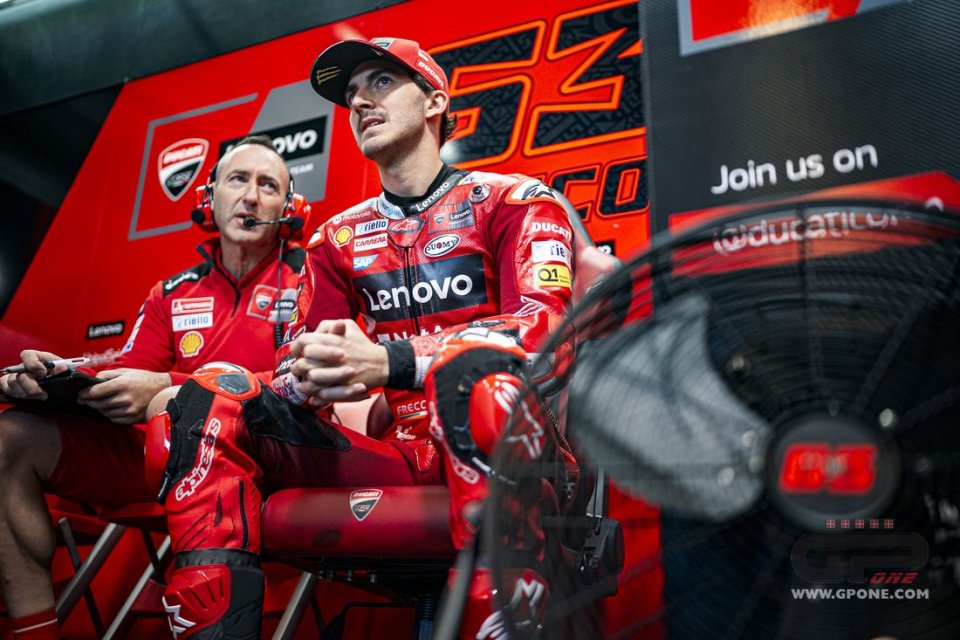 Bagnaia will have to be faster than the pressure, the tension that is mounting and he is his most dangerous rival. He has done all he could to succeed in these two days between practice and qualifying in Valencia: competitive but without overdoing it is the dogma. Respected with an 8th place on the grid, not too bad considering that Quartararo is just ahead, 4th.

“For sure I was expecting a bit more, considering the feeling I had last year. But speaking with other riders with our bike, we are struggling with the front feeling. You can feel less but you can brake harder - Pecco said, just as if it was a normal weekend - It’s strange, but in this track it’s not helping me so much. I’m struggling also with new tyres to push like I want, because the front feeling is not the best, but with used tyres we are competitive. For tomorrow for sure we have to do something, I think the ideas my team has are good, I think they can help me. But my thought tomorrow is not to win, my thoughts are just to be calm and understand. For sure I will take some risks at the start to be away from the trouble.”

What gave you the most thoughts today?

“The fact that I could win the world title tomorrow is the thing that agitates me the most. I think I need to enjoy this moment, be proud because it doesn’t happen to everyone. On an emotional level I am quite sensitive, I will try to be on the ball tomorrow”.

How different is this eve from your Moto2 title?

"The importance on a personal level is similar, but this time we are talking about winning in MotoGP with Ducati as an Italian and this is all different. I will certainly sleep well, because I am not having problems in that sense, but compared to the usual I started having a hard time eating already from Thursday”.

How much have you changed?

“That Bagnaia in 2018 in Moto2 did very well: he started 6th and finished 3rd, he was good. We’ll see tomorrow, but I think I know how to manage myself better on an emotional level”.

Agostini came to your garage, what did he tell you?

“To do what I know how to do, because it will be enough”.

"He invited me for a lemon iced tea later to chat for a while."

How much are you suffering?

“Sincerely, I think that the only session without this kind of feeling will be the race because I will just focus on the race. Like in Malaysia, the race was not the easiest but the one where I was just fully concentrated on doing what I was doing. So, maybe tomorrow will be better than the sessions.”

Does the tension affect your riding?

“I think the only thing is I was trying to don’t take any risks, I was trying to be competitive without making mistakes like we did in Malaysia, like other riders are doing in this track because if we look we see a lot of crashes in these days, maybe because the asphalt is starting to be old. But I don’t think it’s affecting my performance.”

Who will win the race?

“I honestly don't know right now. Martin is very competitive, and so it Oliveira even though he will start from behind, then Marquez and Quartararo are fast. I'll just try not to be out of the top 14, but I think it will be a good race to watch”.

How much would you be willing to pay Miller if he beat Quartararo?

(laughs) “I won't pay anyone; in this race anyone could be my teammate”.

Ducati seems to have a smaller advantage here in Valencia than last year.

“On this track I felt the difference between the old bike and the new ones more, perhaps because I remember this race very well where we made an incredible difference. Now my pace is a bit faster, but the feelings are different: a year ago it was easier for me, now I have to push hard. The different balance may have influenced, but others are making steps forward as well. Yamaha loses just one or 2 km/h on the straight, the same goes for Suzuki, while in 2021 the difference was felt more. But on pole there is a Ducati with Martin who has a great pace and Miller is 3rd ",

Do you have a race plan?

“It is difficult to make a strategy because in MotoGP it is impossible to predict what will happen. Maybe in the first 2 or 3 laps I will have to take some risks to have some advantage to manage. I'll try to make an even better start than at Sepang, it would help me!" (Bagnaia was 9th at the start and 2nd at the first corner, ed.).

Did you ask for any special indications on the pit board?

"The same as always, with one exception: to indicate Quartararo if he is behind me, so that I can decide how to behave. In the end I can tip the balance this time ".