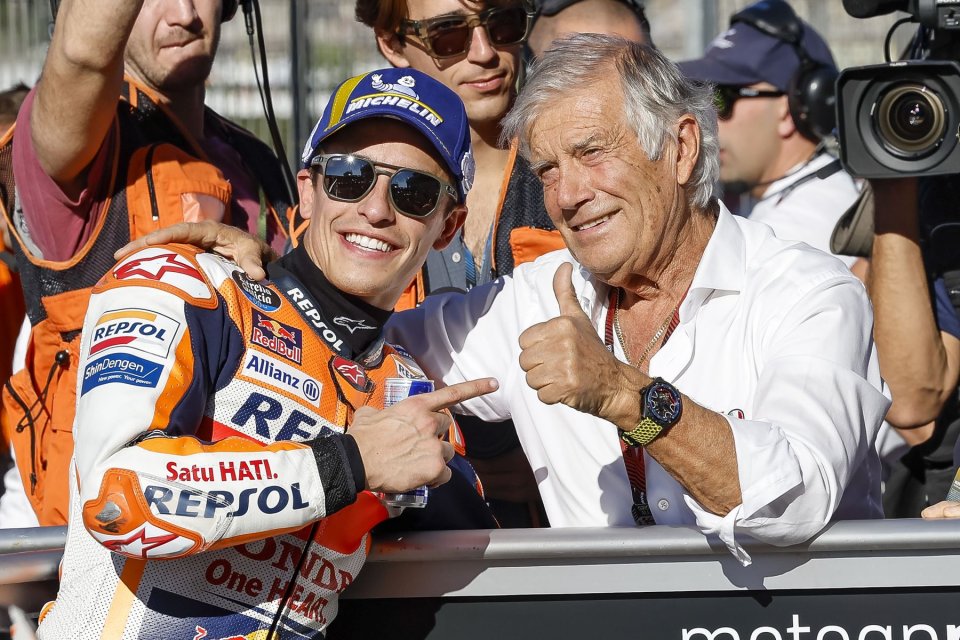 Perhaps it was the thrill of having seen Giacomo Agostini, or the desire to win again and perhaps even a Honda that is starting to respond to his needs. Whatever the reason, it must be said that Marc Marquez produced a superb qualifying session today. He conquered the front row on the grid alongside an inspired Martìn and tomorrow he will probably give everything to try and take home a victory that would be fundamental for the future, before tackling the winter tests and get ready for 2023.

Marquez did not hide his enthusiasm for his qualifying session, in parc fermé as well as in the press conference, with a smile that was clearer than any words. Tomorrow he could also become the kingmaker in the fight for the world championship, because a victory by him would automatically give the title to Bagnaia, taking away any possibility for Quartararo, regardless of Pecco's results. Marc has actually been suffering with a cold since Thursday, so he is not exactly in perfect shape from a physical point of view.

"I'm not feeling very well these days, I don't have all the energy I need to be fast, but this is my home GP. Yesterday I took a lot of risks to find the limit and the pace with the Honda, this morning I knew I would like to finish on the podium tomorrow and I knew that to do so it would be essential today to try to qualify in the first two rows. It was my goal and if I feel good tomorrow, I will take my risks and aim to give everything and have fun ".

Where are you with your physical recovery?

"Regarding my physical condition, I am really happy. My goal was to improve constantly and I am succeeding as I wanted. I am riding well, the times are coming. Also with the Honda we are working hard to improve my control of the front. Tomorrow is the time to attack, when you do it sometimes there are consequences. But I feel free and calm, I will try to manage everything in the best possible way to be on the podium. "

It would be nice to finish with a win or at least a podium tomorrow.

"It has been a strange and difficult season, but I know I made the right decision. At the beginning of the season I suffered a lot, I was often behind in qualifying. Now, however, I am fast, we are working to be fast also in the race because today I can do it on the flying lap, while on the pace the question is different. Tomorrow it would be excellent to finish 2022 well, especially to project ourselves into 2023, I will try to the end. I think more about the podium than the victory, I see it as more realistic as a goal. But I already know that the really important day is on Tuesday, with the new Honda bike. We need to take a step forward if we want to fight for the title next season. "

Tomorrow Fabio will start behind you and he knows he has to win. Are you afraid that he may be too aggressive?

“I know that Fabio tomorrow will push a lot, and he has to push. If he crashes and hits another rider – if he hits me – I will understand. I don’t want him to! But I will understand it, because he’s playing for a world championship, not for a race. I know that he’s smart, but he must do what he has to do. He’ll do the correct thing, to attack. Everyone will attack, and especially the Ducati riders will attack more because that’s the best way to help the leader that is Pecco. I want to do a good race as well, and for me it’s another race, but in the end the two guys are Pecco and Fabio, and everyone will pay attention to these two guys tomorrow.”

How do you see Fabio's situation now?

“If I’m in the position of Fabio, then on Thursday I would have seen everything dark but now it would be more clear, shinier, because you don’t know. Pecco starts in eighth position, and in the middle you never know. I think Fabio can still have some chances to win the title at the end. He has chances, if I were in his shoes I would think about it. Of course, without anything strange happening, Pecco will be champion. At the beginning of the season he made many mistakes, but then he also showed that a MotoGP season can be very long and that the cards on the table can change. "

Are you curious after Tuesday to talk to Alex to find out how the Ducati goes?

"I won’t ask him anything because I am a Honda rider! (laughs, ed.). But it is clear that I am very curious to see how things go on Tuesday, how the riders who move to other bikes will go. Of course, I'm on the Honda so I don’t need very much to know that the other riders on other bikes go fast or slow. But I will remain mainly focused on what happens in Honda. "

Two consecutive first rows mean something for you and for Honda?

"I said yesterday that to fight for the 2023 title it will take one step forward from me and two steps forward from Honda. I still think so. Today you saw me in the front row, like in Malaysia, but you also saw that I struggled during the race. But I believe in Honda and I know they can do it. I know that Tuesday will not be the last step forward for the bike, but it will certainly be a first step. Then we will need to see further steps forward to get to the level of our rivals ".

Tomorrow it will be warmer; do you think tyre management can be important?

"Tomorrow everyone will race with the same tyres in my opinion, the hard in the front and the medium behind. Everyone will choose them, even if it will be warmer tomorrow. This morning with the cold there were many crashes, managing the tyres well tomorrow will undoubtedly be important".

Honda is focusing a lot on you for development, but two new riders will arrive on Tuesday. What will HRC’s strategy be?

"I must say that in some moments it is nice to be able to share a lot of information with all the teams and riders. But when you are in a critical situation like ours, you don't have the possibility to do so many different things. I am not the right person to say how things can work, I try to push to find the best for myself. I can say that at the beginning of the season, Pol and Alex had the exact same bike as me. Then when I returned after the operation, it’s true that they started focusing on me, but only because they didn't have enough parts for everyone to test. "