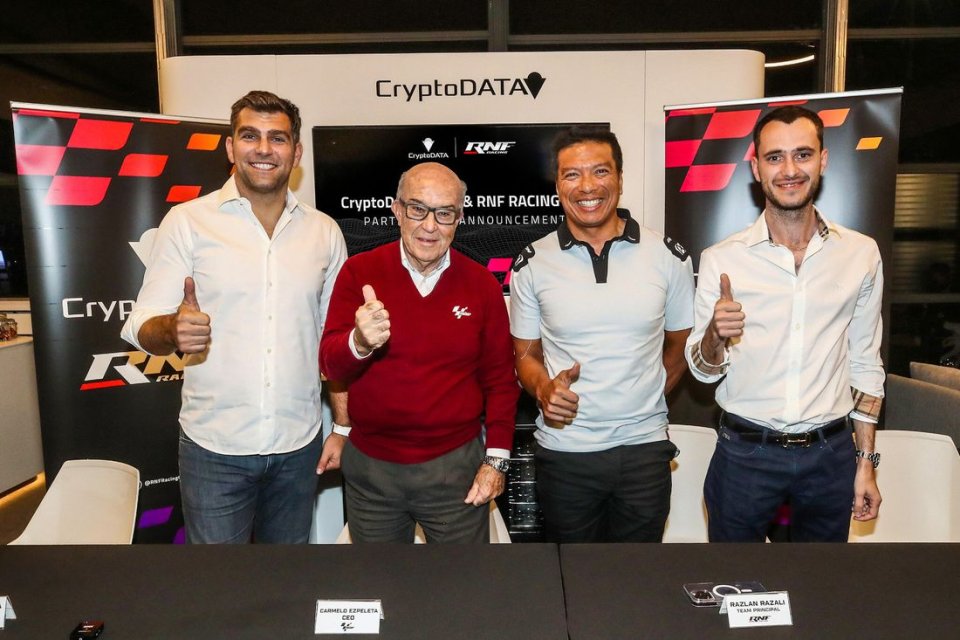 RNF Racing announced a new majority shareholder with CryptoDATA Tech, a blockchain-applied technologies pioneer and developer of hardware and software cybersecurity solutions. This strategic investment marks a significant milestone and a beginning of a new era for the fifteen months old RNF MotoGP team.

After previously announcing the cybersecurity company as the Official Premium Partner for the final three races of the season, CryptoDATA’s became a partner who shared the same passion, values and recognised the potential value of a MotoGP team in the long term.

With CryptoDATA as the majority shareholder, the vision and strategy is to go beyond racing and expand the business and services into motorsports mainly in MotoGP and taking the role of the business and branding aspects of the team. RNF MotoGP Team will continue participating as an Independent Team in the premier class of the FIM MotoGP World Championship with Team Principal Razlan Razali remaining at the helm focusing on the sporting and technicality side of the team.

In conjunction with the final race of the season, RNF MotoGP Team and CryptoDATA will be unveiling a special livery design on race day at the Valencia Grand Prix.

Razlan Razali, Founder and Team Principal RNF Racing: "Today marks a historical milestone for the team. I'd like to thank CryptoDATA for putting their trust in me and the team for the future. In a short period of time, discussions have evolved into a long term commitment. We have extended our partnership, and as I previously stated, this is a fantastic collaboration. The union of the two companies will drive the team to not just perform in racing, but also to grow the business aspects of the team, and this is where both parties join forces to share expertise and experience. My main focus is to ensure the team fights for the championship while CryptoDATA’s team consisting of young, smart, innovative, and ambitious individuals will develop strategies to strengthen our position off track."

Ovidiu Toma, Chief Executive Officer and Founder, CryptoDATA Tech: "We are delighted to extend our partnership and become the majority shareholder of the RNF MotoGP Team. The MotoGP World Championship is an exclusive and international showcase, a special universe where the starting grid is a stage for heroes in which CryptoDATA has found its space by sharing its values and objectives. We became the first Romanian company to Title Sponsor a Moto Grand Prix at the Red Bull track this year, and we are now more excited and motivated than ever to become the majority shareholder in the RNF Team. This represents not only a historical milestone for CryptoDATA, but also a new beginning and a significant incentive."

Carmelo Ezpeleta, Chief Executive Officer of Dorna Sports: "The agreement that Razlan Razali has reached with CryptoDATA allows him to maintain the viability and presence of his project in MotoGP. We are delighted to see a new sponsor supporting a team, especially one that Dorna brought to the championship. We were happy with the relationship with CryptoDATA at the Austrian Grand Prix, they have the idea to develop and the idea to put things together with Aprilia next year which is the stability needed for MotoGP, it’s a very warm welcome for CryptoDATA to MotoGP. The fact that they are not just limiting their participation in the sponsorship area but in an entire team shows the importance of Motorsport and of MotoGP in particular. We know that Razlan had many requests, and we believe he has chosen the best option for the future and to consolidate his structure."