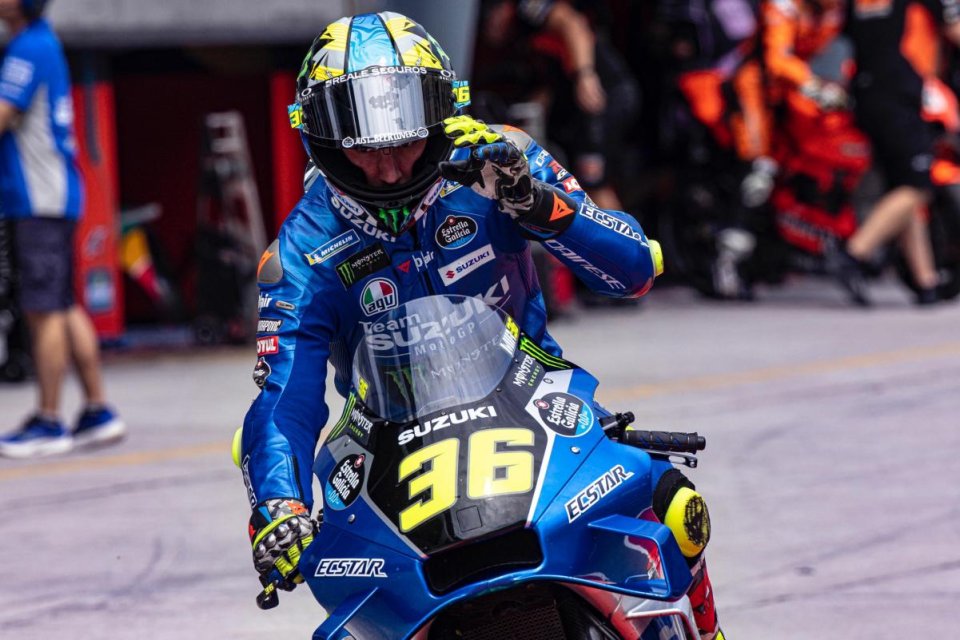 Valencia will be the last race for Joan Mir and Suzuki. On the track dedicated to the memory of Ricardo Tormo, the Spanish rider ends his relationship with the Japanese constructor. An experience made up of joy and emotions, with the 2020 title considered the highest of his achievements.

Joan is ready for this last Grand Prix riding his GSX-RR.
“This weekend will certainly be special and exciting for all of us,” he said. “My motivation is great, since I wasn’t able to achieve a result in Australia and Malaysia, considering what my potential was. That’s why we want to conclude this adventure with a good result, both my team and myself. My team is a very professional team, and there’s an awareness within each of us that this will be a weekend that's different than the others.”

Then he talked about his health.
“I had an MRI this week. The doctors ruled out that it’s my neck. In the end, it’s compartment syndrome and, after the test, I’m getting surgery on my right arm to solve this problem.”

Obviously he still has regrets because of the end of his Suzuki chapter.
“I was hoping to hear this news at a later date, but it’s still an extraordinary year. Obviously, it wasn’t easy to accept Suzuki’s retirement, as well as experience all the emotions that followed. 2022 was different for us from the other years, especially at the beginning. But, like I said, we want to end at our best.”

Meanwhile, Valencia will be the stage for the fight towards the title in the Moto2 and MotoGP.
“The Moto2 will be interesting. Ogura made a big mistake in Malaysia and, consequently, I expect an exciting race. If I were Fernández, I’d aim at doing my own race because, if you start man marking Ogura, then you end up behind all the other riders, and that could be risky. As for the MotoGP, what can I say. Generally, we all know how it could end between Pecco and Quartararo. I think that Saturday will be a decisive day for Fabio and Bagnaia. 2006? I remember it, something like that could also happen,” he said smiling.

Joan Mir knows what he thinks about Pecco’s possible victory.
“If Bagnaia wins, those who claim that he didn’t deserve the title, don’t understand much about about motorcycles or sports, in general. Personally, I wouldn’t give importance to those voices. We won in 2020, and winning the title means managing many things well and then confirming it the following year.”

Finally, Tuesday’s test with Honda awaits him.
“I don't think it's going to be a revolution and a perfect bike. It’ll be a different bike than the Suzuki in terms of ergonomics. We’ll then have to work one step at a time to understand the bike and adapt. Tuesday will definitely be an important day, but first we have to think about Sunday.”

Honda revolution: changes on the CBR RR-R for 2023