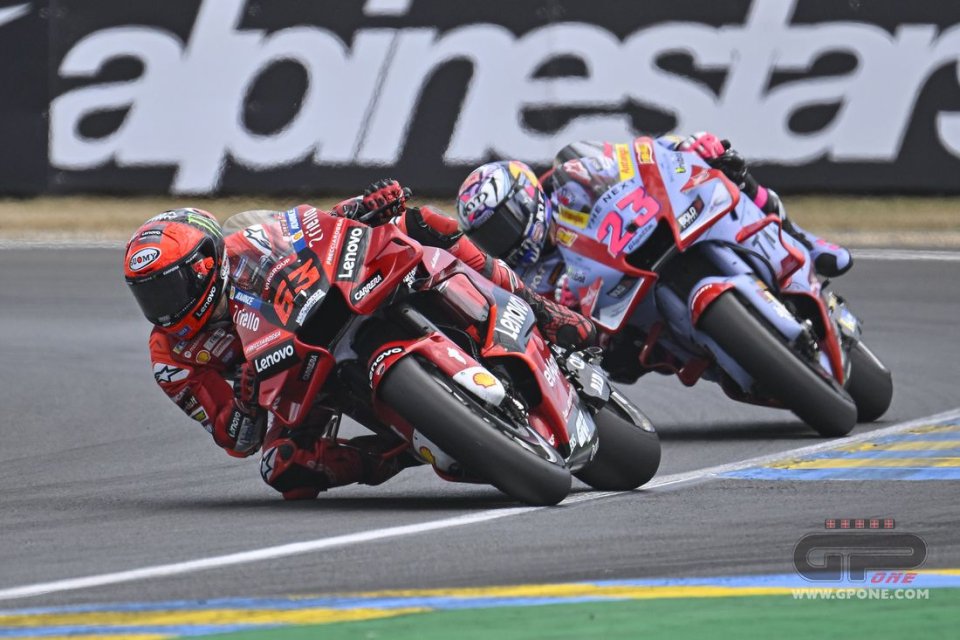 For better or for worse Ducati has marked the last 20 years of MotoGP racing. It has done it with a bike that has always been different from all the others, the Desmosedici GP (the two digits following the acronym indicate the year). Its first father was the engineer Filippo Preziosi, who then left his creature in good hands, those of Gigi Dall'Igna, who shares with his predecessor the love for lateral thinking and the ability to amaze.

It has been a fifth of a century full of success and flops, in which the bikes from  Borgo Panigale have often been controversial, without ever leaving observers indifferent. The first versions were almost a mechanical bull, the last ones have managed to combine performance with ease of riding.

On the eve of the Valencia GP, in which Bagnaia could be crowned world champion, we retrace the history of the Desmosedici through 7 iconic models.

Desmosedici GP03: where it all began 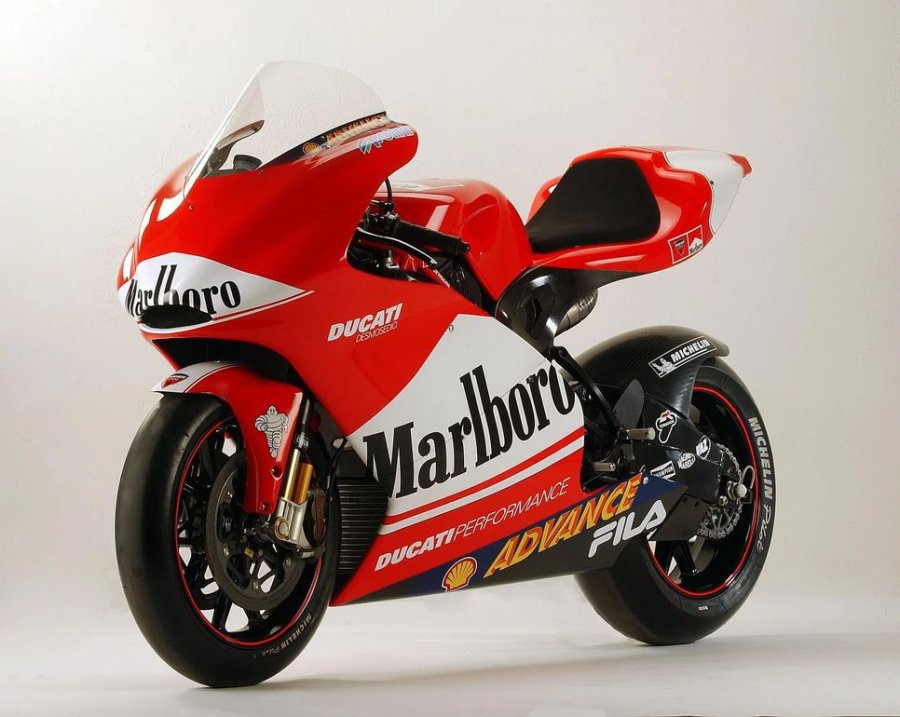 Trellis frame, desmodromic distribution, lots of horsepower and a good dose of motorcycle ‘ignorance’: this was the Ducati recipe in MotoGP sauce. The first Made in Borgo Panigale prototype respected all the dictates that made the Rossa famous, including beauty. The important thing, however, was that the bike created by Filippo Preziosi’s pencil and his men is fast.

So much so as to allow Loris Capirossi to take it to the podium on its debut in the Japanese GP, while the first victory came at Barcelona, ​​in the 6th race. A good start bodes well. 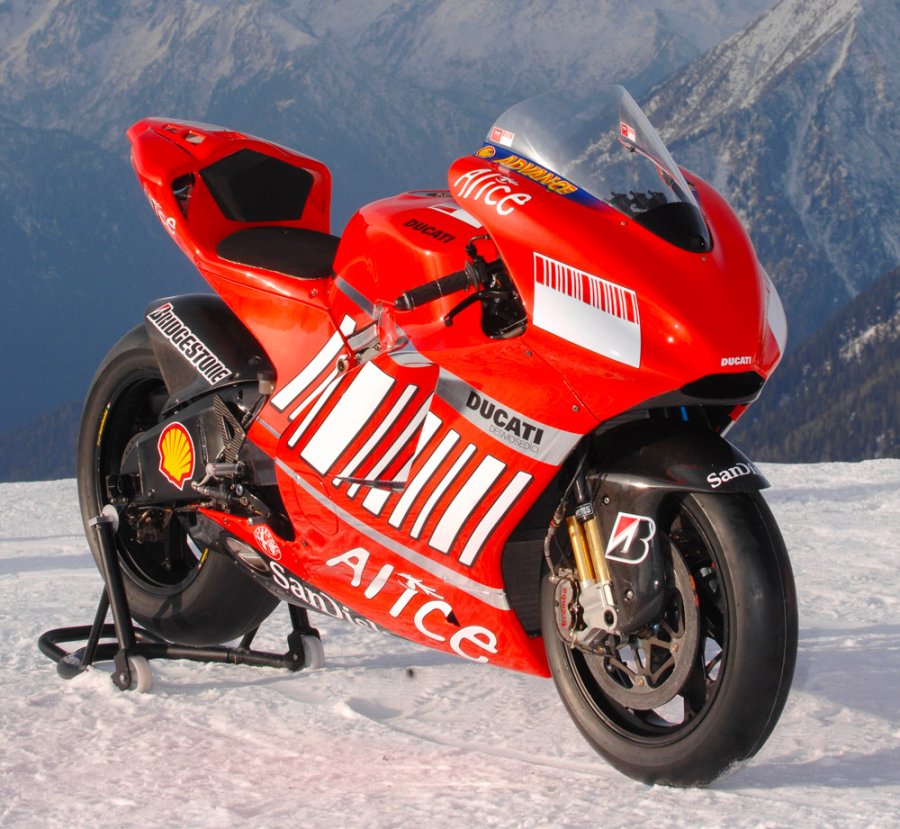 In 2007 MotoGP went down in displacement, passing from 999 to 800 cc, but the Ducati did not lose its characteristics. It was fast and difficult to tame, so much so that Capirossi reaped very little. The secret weapon of Borgo Panigale, however, was called Casey Stoner, who, on the contrary, managed to perfectly interpret the Desmosedici and hide its flaws thanks to his talent.

It was the year of the riders' and constructors' titles, all achieved in the fifth season in the premier class. One of the keys was the transition from Michelin to Bridgestone in 2005.

"At the time I was in charge of the Ducati MotoGP project - recalls Livio Suppo - During the season there were negotiations with Sete Gibernau. He asked for a lot of money, which Ducati did not have. At the time he was the second best rider behind Valentino Rossi. But he could have won two or three races a year, no more. He was super expensive and the chance to win the championship was almost non-existent. We needed something to keep the sponsors happy and renew the contracts, especially the one we had with Philip Morris. So I looked at the results of the other teams. Tamada rode for Honda and used Bridgestone tyres. He managed to win races and get on the podium. In some races he was a disaster, but in others he was super rapid". 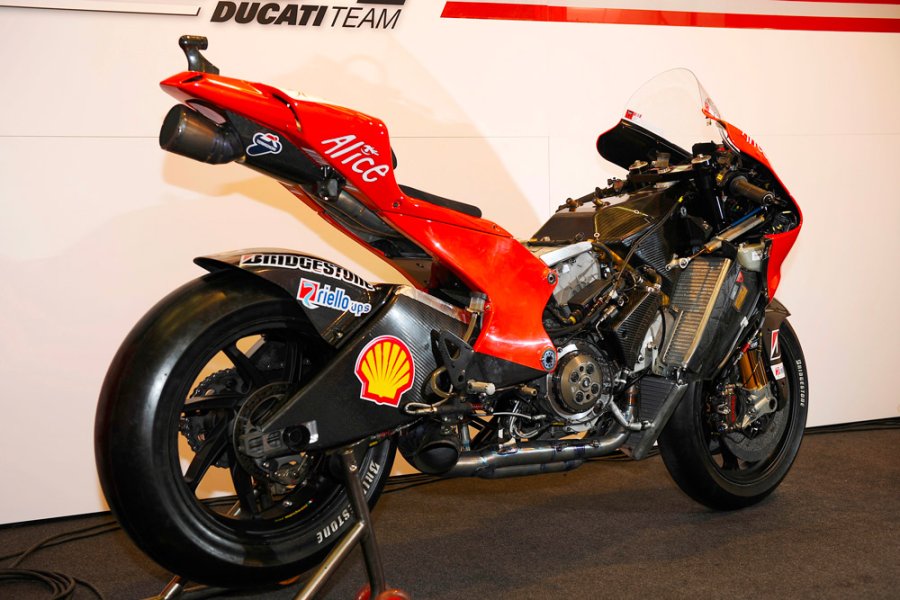 Ducati has always been famous for going against the grain, for focusing on solutions that are different from those of everyone else. In 2009 the Desmosedici abandoned the trellis frame forever, a trademark both in racing and in its road models, and in its place came a carbon monocoque structure.

A unique solution in MotoGP and one which seemed to work, at least in the hands of Casey Stoner, who with that bike won the first race in Qatar and 3 more during the year, plus another 4 podiums. However, the Australian was the only one who knew how to get the best out of it and Hayden barely picked up a 3rd place in the entire season. 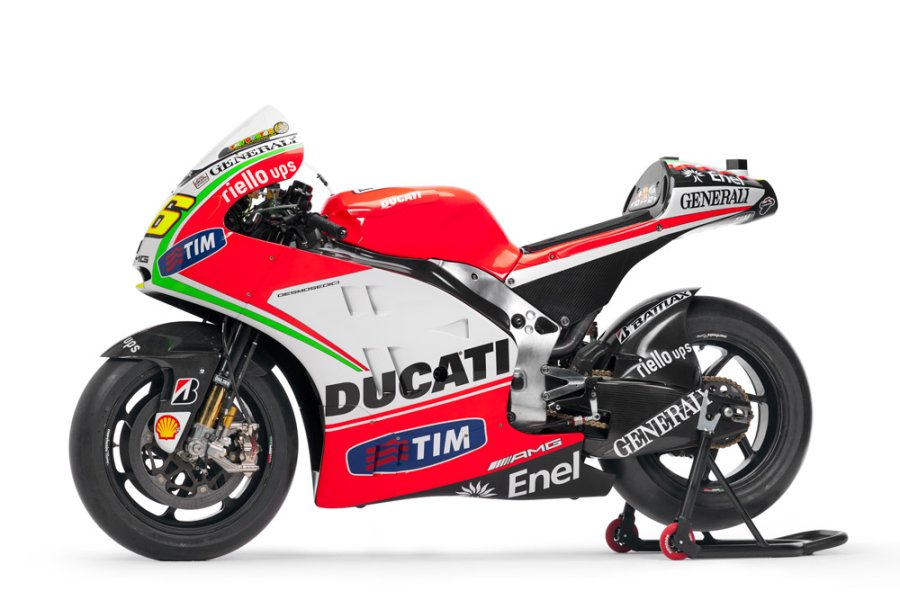 Valentino Rossi had arrived at Borgo Panigale the year before and the results had been anything but successful. By now it was clear that the Desmosedici project had to be revolutionized and the chassis was at the centre of the problems. The carbon monocoque had its limits and the engineers decided (in the year in which the 'full' displacement of 1,000 cc was returned) to conform to the Japanese competition. A 'traditional' frame made its debut on the Ducati MotoGP, a twin aluminium spar. However, it was reached gradually.

The results were not particularly good, the Doctor scrapping together just 2 second places, but it was the beginning of the revolution. Also because Filippo Preziosi left Ducati in 2013 and, after Bernhard Gobmeier's brief interregnum, Gigi Dall’Igna arrived in 2014. 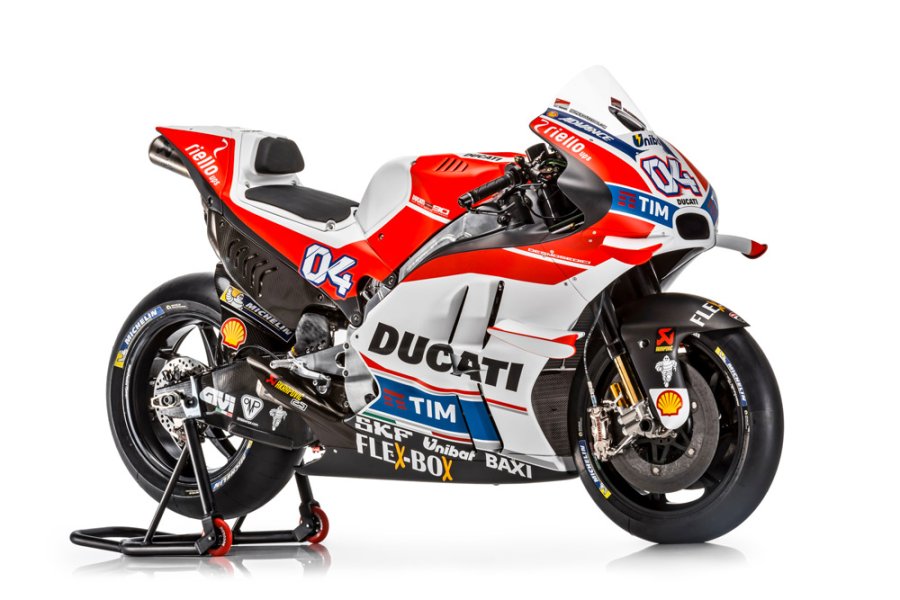 Dall’Igna deserves the credit for having re-established the Ducati racing department, from a management point of view even more important than from a technical one. The Veneto engineer first laid the foundations and then turned the Desmosedici upside down, often with innovative solutions, such as wings. The GP16 was presented with spoilers that first caused a lot of controversy and then become standard for everyone.

2016 was also the year of the manufacturer’s return to victory after 5 years of fasting: Iannone won in Austria, Dovizioso in Malaysia.

Desmosedici GP20: copy me if you can 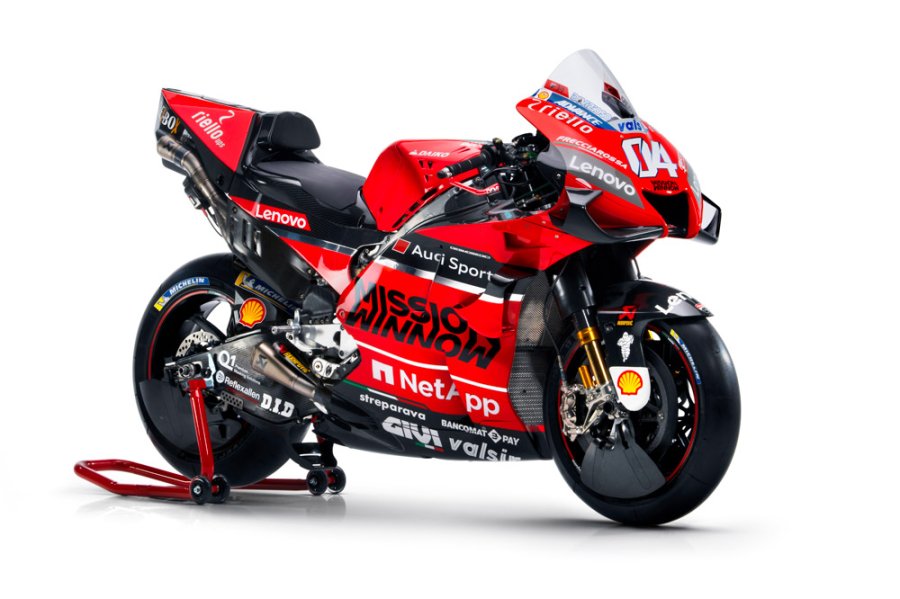 Over the years Dall’Igna and his men have constantly evolved the Desmosedici without losing its strengths (horsepower and braking stability) and trying to improve the weak ones. The 2020 Ducati was the first with the system that lowered the rear of the bike during the lap and showed how much aerodynamics had evolved in just 4 years.

The only negative note were its results on the track, just one victory each for Dovizioso and Petrucci throughout the year, but the project was reaching its maturity. 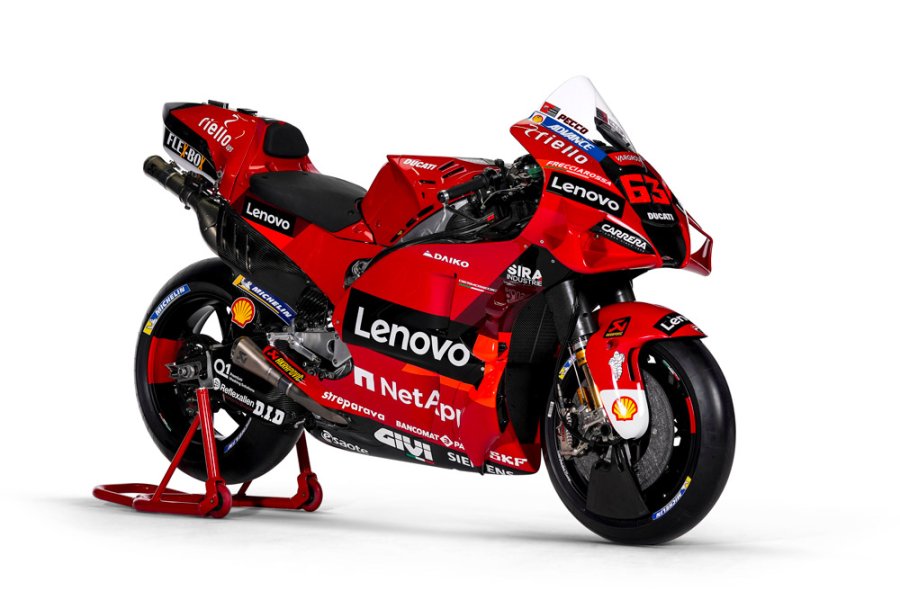 It is logical that the next model is always better than the previous one, but the Ducati 2022 is a masterpiece. After some teething problems in the first few races (solved by abandoning the front lowering device), the Desmosedici showed its muscles. With the GP22 Bagnaia has already won 7 races, Miller one, while 4 are those of Bastianini, but on the GP21.

The Desmosedici wanted by Pecco seems to have no weak points: the horsepower is the same as always, stability under braking as well, but now rideability and handling have also increased (thanks also to a different, smaller fairing).

On the flying lap it is almost unbeatable (15 poles in 19 races) and in the race it knows how to adapt to all riding styles. The only question is: how will Dall’Igna and his men make it even better?

Tardozzi: "For Ducati having the media at the Shakedowns is right and a...