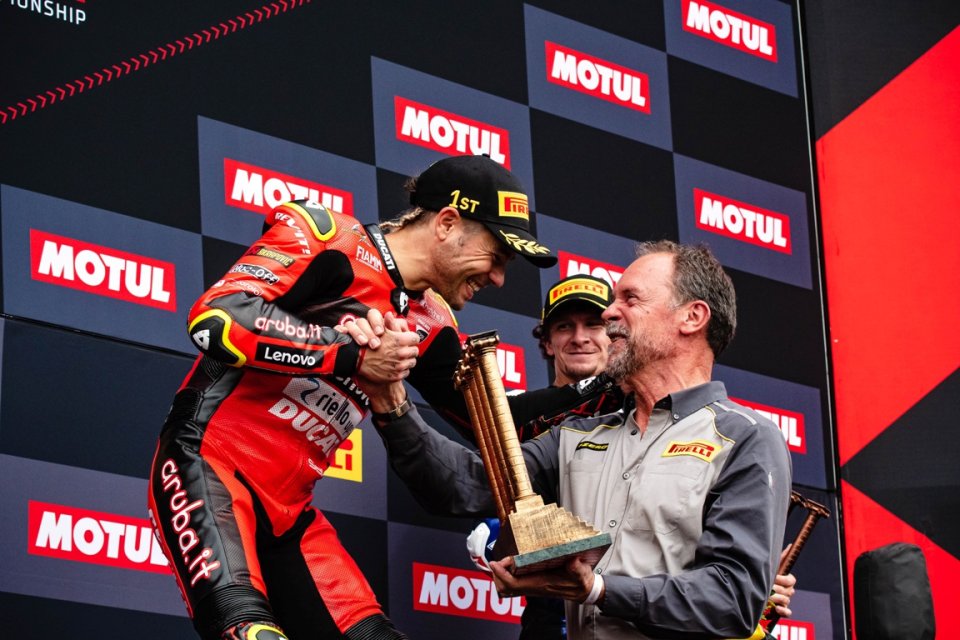 Giorgio Barbier opened the doors of Pirelli headquarters in Milan in the Bicocca area to us. We shared a long chat with the Superbike manager of the Italian manufacturer, who recently returned from Argentina, about the Italian brand's efforts on the track over the last season.

Many issues were touched upon during this long interview, including the evolutionary process of the tyre, the feelings of the riders, as well as a look towards the future with attention for sustainability. The starting point is obviously the Superbike World Championship, where the season is moving towards its conclusion.

“We are in the final stages of this World Championship and only the Indonesia and Australia are remaining - began Barbier - Mandalika will be a big unknown, because they have recently completed the resurfacing of the track and we will be the first to race there. It was a necessary intervention after what happened with MotoGP, since pieces of asphalt were coming away in the tests. What should we expect? Honestly I do not know. I think we will find a slippery asphalt, still to be rubbered and less aggressive than usual”.

Given the many question marks, I guess you won't be taking the SCQ?

"Exactly. The SCQ will not be one of the solutions foreseen for the weekend, since it didn't seem appropriate to expose the riders to a possibility that could not work, therefore we preferred more robust options”.

Despite the pandemic and the Russia-Ukraine conflict, Pirelli has never stopped investing. It has always raised its game. Do you agree?

"Of course! The performance of our tyres has increasingly adapted to the improvement of the bikes over time. I think the level that Superbike has reached in recent years is clear to everyone. Pirelli has grown, without falling behind and this is a job that must then lead to an outlet to the market, with one eye on our customers”.

Giorgio, let's talk about the track. As you well know, during the season Rea complained about too much of a tyre choice. What do you think?

“Johnny has always been the first rider to try the new solutions brought to the track by Pirelli and I think this is also due to the versatility of the Kawasaki, as well as the working method adopted by the team. At the same time, however, we must add that this is a very special season for him and the team, given the competitiveness of the Championship. I therefore think that external intervention on our part can destabilize the known equilibrium”.

Do you think that he didn't trust you much, preferring to rely on past feedback?

"This I don’t know. Pirelli certainly knows what to do on the track compared to teams and riders who rely on data from years before. If we bring solutions, they must not be discarded a priori just because in previous seasons one tyre has worked better than another. Maybe, in this period of time, the track conditions have changed and for a tyre that was struggling the year before you will find it is more competitive ".

To round off the subject of Rea: will Pirelli change its method or approach for 2023?

“We will continue to do the work as we have always done and with the same method. Because otherwise we make a single tyre like the SSP300, but all this would go against the evolutionary process. The results that Pirelli has found on the track are however encouraging, given that we have seen races that are 10 seconds faster this season. So the path we are following is the right one”.

Bautista, on the other hand, seems to make the most of your tyres.

"I remember when I spoke with Dall’Igna in 2018 and Gigi told me not to be surprised if Alvaro chose very soft material, given his past with Bridgestone. Ducati has certainly undergone a remarkable evolution process with the Panigale V4 and Bautista has been very good at exploiting the potential, especially when exiting corners”.

Giorgio, let's now talk about sustainability. In a recent interview, Michelin said that from 2024 it will introduce tyres with 40% sustainable materials. What will Pirelli do?

“This is a very important issue for Pirelli, on which we are already working. At Portimao, on the occasion of the R3 final, we inserted tyres with reused materials and the performance proved to be excellent. We will therefore continue throughout next year in SSP300 with this process and in 2024 we would like to extend it to other categories as well as on the market to all our customers”.

Michelin will use orange and lemon peel, as well as food scraps. Pirelli instead which recycled materials will you focus on?

"These are ingredients present within the compounds, which represent an important part of the weight of the tyre, especially the tread. Then there are the rubber compounds of the fabrics, of the metals including the metals themselves that can be recovered. In practice, the less noble materials are replaced with more noble ones".

What is the percentage of recycled material at the moment?

"Difficult to quantify, we are currently working between 20-30%".

Always remaining in the future: at the end of 2023 the agreement with Dorna for SBK will expire. Are you already laying the groundwork for renewal?

"Pirelli's idea is to continue this path started many years ago. Superbike is an ideal platform for us and the effort is incomparable to others. It is a cost model, but the development carried out over time has given results and satisfaction with one eye on the market and our customers ".