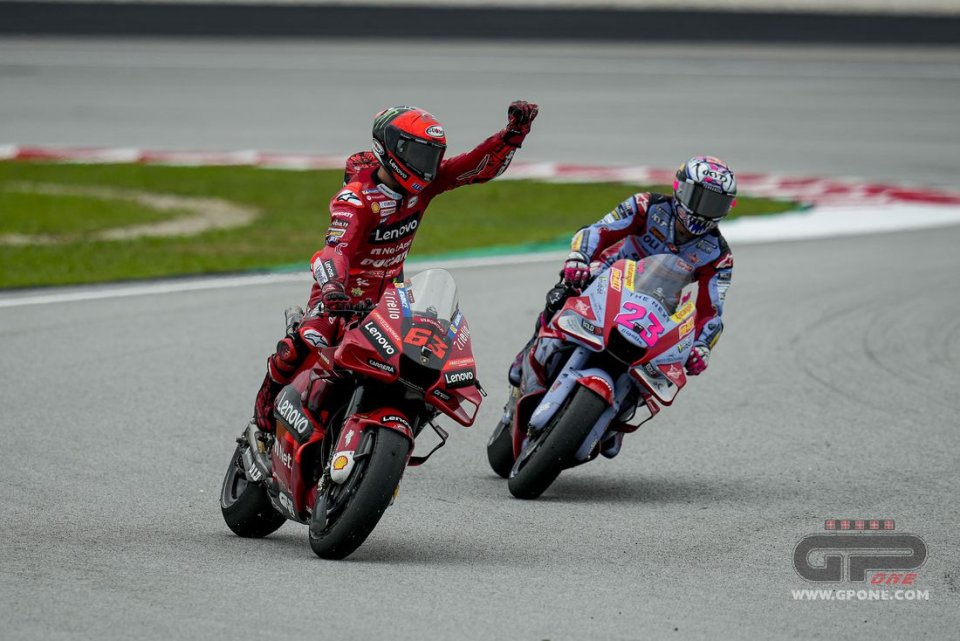 Quartararo made him postpone the party in Valencia, but for Pecco Bagnaia the Sepang race could not have gone any better. He took his 7th win this season and above all he took his advantage over Fabio to 23 points, which means that in two weeks’ time at Valencia he would only need a 14th place to be champion regardless of the Frenchman's result.

However, it was not a walk in the park for the Ducati rider and he found Bastianini grist for the mill.

“It was tough - admits Pecco - Yesterday we showed that we had an excellent pace and I knew it would be really important to have a good start: it came out even better than I expected. The long straight helped, but I also had excellent reflexes and I risked under braking: I was hoping to be 5th, but I found myself 2nd. At that point I tried to follow Martin, but he was pushing too hard on the tyres and doing like him could have been a double-edged sword for me. I tried to manage and, when he crashed, I did it even more: we were all at the limit with the front tyre. "

What was the most difficult moment?

“When Enea passed me. I thought he could go away, but I saw that he had the same problems as me: he had more traction in the fast corners and I in the slow ones. I tried to stay as close to him as possible and then pass him back under braking. In braking I was strong, that's what allowed me to win today ”.

Did you ever think of settling for the result?

"Quartararo was 3rd, my only chance was to win".

Yesterday you were saying that maybe today would be the right day to talk about team orders. Did you expect less resistance from Bastianini?

"The words 'team orders' mean team orders, so these are things I can only talk about with Miller."

Did Bastianini put pressure on you?

“Enea remains an opponent, a rider who wants to win and I imagined it would be like that. Maybe only Jack would have acted differently, but if he had had a chance to win he would have tried. In the end, that's right, a fight like that leads you to push hard, maybe if Enea had stayed with me for the whole race at half a second Quartararo would have caught us again. It is good to use pressure to push yourself further ”.

Were you nervous today?

“Not in the race, I was pretty calm because I was focused. A little less at the start, my reflexes helped me there. Before the race I felt the tension, it's normal, then the concentration makes you stay on the ball ”.

This is your 7th victory of the year, Ducati is at 12, a record.

"It would have been better if I had done all of them (laughs). Considering where we started from, we can be really happy to have won 7 with 5 zeros."

Tardozzi said that next year, with you and Bastianini in the team, they will do everything possible to ensure that what happened between Dovizioso and Iannone in 2016 is not repeated…

“These are things that can happen when there are two competitive riders in the same team, even at Phillip Island Jack and I fought. It is right that the riders feel free to do their best, there has never been a first rider in Ducati. Enea will aim to win all the races and it will be a stimulus for me”.

Do you know that you made Dall’Igna go to the pit wall twice?

"I didn’t know, as usual I did my race without asking for anything".

What do you think will be the atmosphere in the garage with Bastianini on the other side?

“It won't be easy, but we will have to try to do a good job. It will be a different situation from the one with Miller, because Enea is different from him. When you get to an official team, adapting to the working method will not be easy at first, but I think he will have no more problems for the championship start. In the end, your teammate is the first opponent to beat ”.

In what mood will you arrive in Valencia?

“Good, I feel happy right now. That Sunday I may feel more nervous, but I can say that today we did a good job considering how this weekend started. Going from Sachsenring's -91 points to +23 now is something we must be happy about ”.

Is it so simple to get to the last race without calculating? In the end, a 14th place would be enough to win the title regardless of Quartararo's result ...

“You certainly think about it, but I also know how dangerous it is to be in the middle of the group. I will try to be as lucid as possible and stay ahead, for sure if I have a chance to win I will try. It will have to be a normal week for me, like this one… but without errors ”.

Is it time to take a breather?

“I can finally relax, after so many mistakes! In Valencia I will have to understand that I can be fast even without making mistakes and today's race proved it. I kept up a good pace without doing anything crazy”.

How will you spend this week off?

"Normally relaxing, spending time with friends, my girlfriend, my family and working out. I have no special rituals"