Penultimate round of the season for MotoGP which is returning to Malaysia after missing the last two seasons even if the prototypes did testing at the Sepang International Circuit in 2020 and this year in February. According to Brembo technicians who work closely with all the MotoGP World Championship riders, this track is one of the most highly demanding circuits for brakes.  On a scale from 1 to 6, it is rated 5 on the difficulty index because of its critical temperatures due to the tropical climate and the high number of braking episodes and how long they last. To solve this problem, this year Brembo has introduced a 355 mm carbon fiber ventilated disc which increases heat exchange and therefore improves disc cooling.

A dozen Brembo discs for MotoGP - Brembo supplies the teams with a wide range of brake discs: each MotoGP rider can choose from six disc geometries and two different carbon compounds are available for each one. The 320 mm and 340 mm discs come in High Mass and Standard Mass geometries whereas the 355 mm disc exists only in the High Mass finned version: there would not have been any point in creating a 355 mm disc with a standard brake band because this would have reduced its strengths. The finned disc also comes in a 340 mm High Mass version and this is also used on circuits that are the most demanding on the brake system.

Street bikes and bikes used on track days clearly do not have carbon fiber discs. However, this does not mean that the experience in MotoGP has not had a positive effect on factory production. A good demonstration of this is the T-Drive disc with its steel braking band and billet aluminum housing. The T-Drive system gets its name from the eight T-shaped pins on the disc which, along with the same number of outlines on the housing, eliminate the need for fastener studs. This results in both axial and radial floating, increasing resistance to the thermal-mechanical stress and the braking torque transmitted. 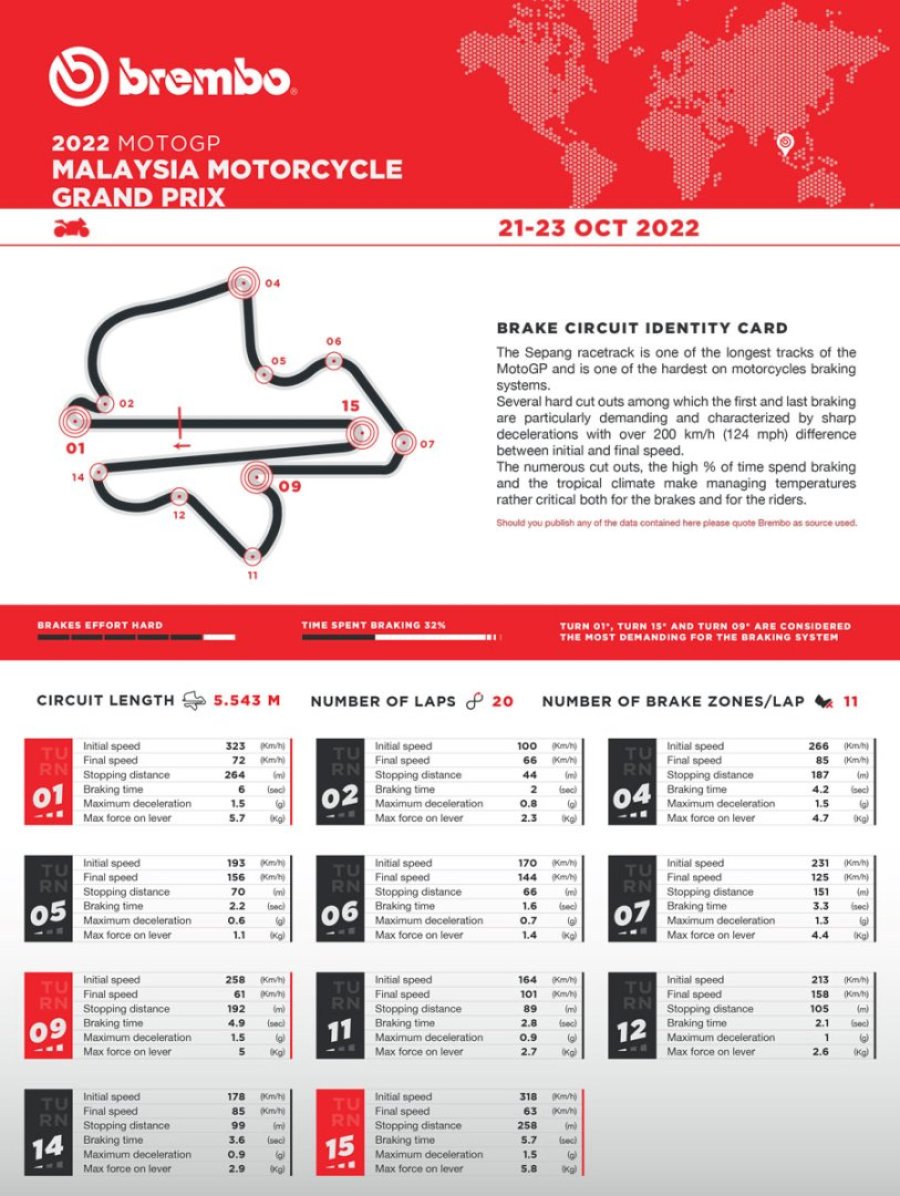 More time is needed only at Losail - The MotoGPs use their brakes 11 times per lap for a total of 38 seconds which amounts to 32% of the entire GP. These 38 seconds are only less than the 40 seconds at Losail but here the brakes are used 13 times per lap. At Sepang, 4 braking moments last at least 4 seconds and a couple of these over 5 seconds: 5.7 seconds are needed on the last corner to reduce speed by 255 km/h (158 mph) in just 258 meters (282 yards).

Deceleration varies a lot but in 4 points it does not go below 1.5G including corner 9 where the riders have to apply 5 kg of pressure to the brake lever. If we sum up all the force that the riders apply to the brake lever from the starting line to the checkered flag, the result is over 770 kg (1697 lb) a fairly low value when compared with the 1200 kg (2645 lb) of the San Marino GP.