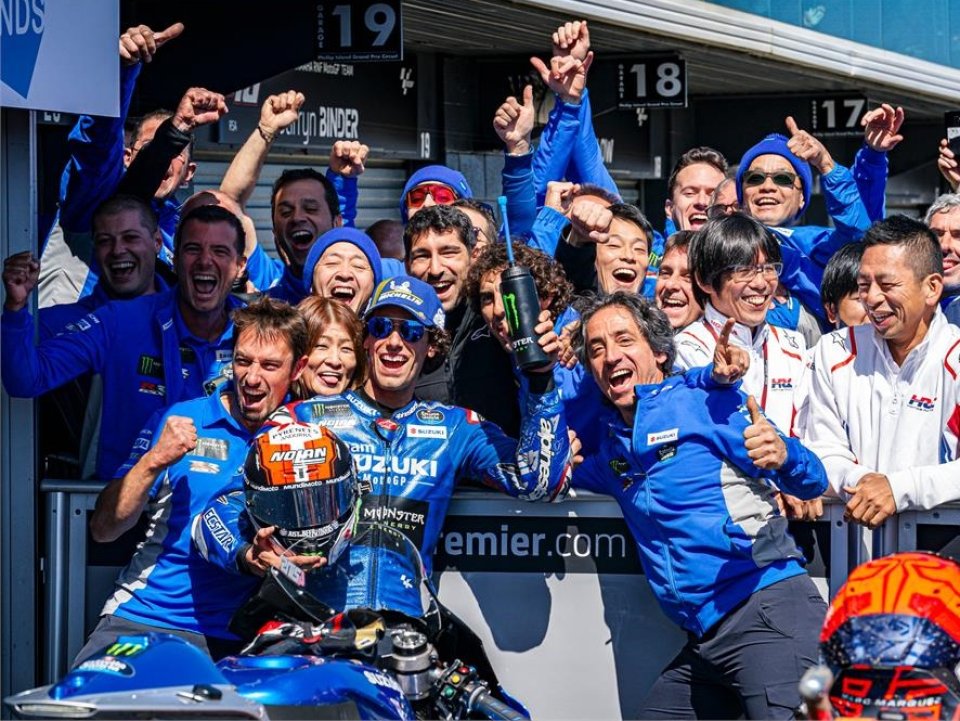 The sun always shines again after the storm and so it was for the Suzuki Ecstar team which, with the victory of Alex Rins at Phillip Island, returned to the top step of the podium, almost two years after the last time. A sweet success for the Japanese team, which has never stopped believing, but also a victory that makes Suzuki's decision to abandon MotoGP at the end of the season even more incomprehensible. Even in the eyes of the team members themselves.

The overwhelming joy in the team garage of the Hamamatsu manufacturer, in fact, cannot fail to be veiled by a hint of regret for what could have been, what was not and now will not be. Livio Suppo is perfectly clear about this, when commenting on the Phillip Island race on Sky Sport MotoGP.

“It's really nice, a great satisfaction for the guys. We know it's been a tough season, even for Shinichi Sahara and Ken Kawauchi. They are our bosses here at the track, and being part of the racing operation, they are obviously the first to be disappointed by the company's decision - said the Team Manager - I felt really good in this team and I am very sorry that with such great potential we have to leave, but it is what it is”.

No one on the team, or outside, expected Suzuki’s board of directors in Japan to decide to end the project once again. Much less in the light of the start of the season which, after the first five races, saw Rins on equal points with Quartararo, at the top of the World Championship.

“When you don't sleep because of jet-leg you think about it and I wonder if it would have been a different season without the retirement. We started very well, especially with Alex. Who knows if this influenced him so much that he had a season in which he was always fast, but he achieved very little, except at the beginning of the season and here. It will be a doubt that I will have all my life - commented Suppo - I honestly don't know what happened to him on Sunday. Maybe Rins always shows his best when he battles with Marc. I was reminded of this by Manuel Cazeaux, his crew chief, that when he won at Silverstone, he also fought with Marquez there ”.

“Joan also had a crazy pace in practice, but unfortunately he had a very dull race due to a technical problem, so he raced with the tyres that had the wrong pressure” concluded the manager. Who knows if Mir will also have an opportunity to come good again in these last two races, before joining Marc in the Repsol Honda team.