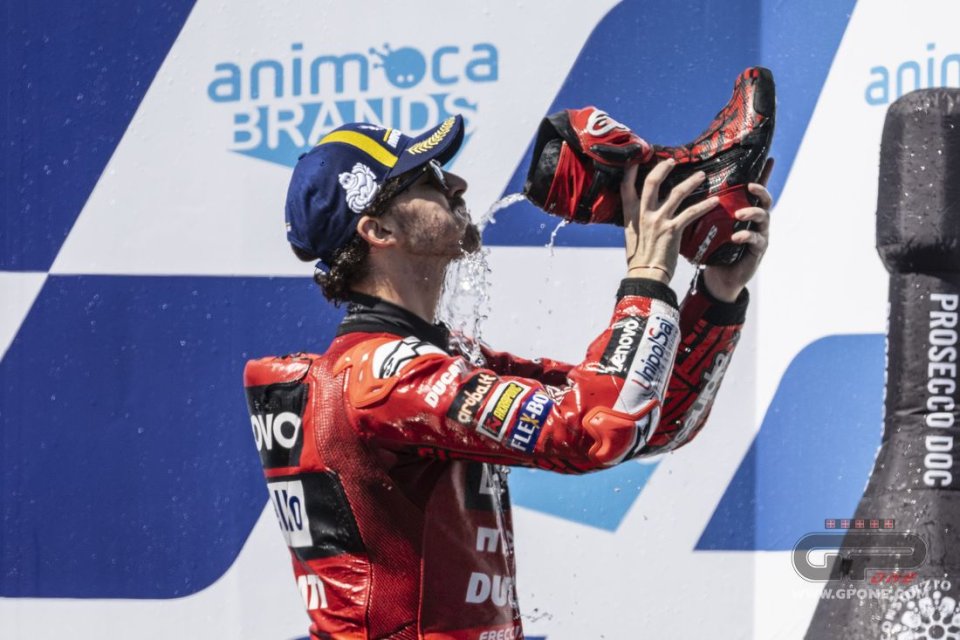 Pecco Bagnaia did not finish in front of everyone at the Phillip Island chequered flag, but he achieved a much more important goal. For the first time this year he is leading the championship, 14 points clear of Quartararo, after having made up 105 points in 8 races. He could jump for joy, but the Ducati rider doesn't want to rest on his laurels or promote himself with flying colours.

"For two reasons. I'm very happy for the championship, but by finishing first I could have been 23 points ahead of Quartararo instead of 14 and winning always gives extra pleasure, especially here, with so many people. This is the first, the second is that I slept 8 hours in 2 days and I am quite cooked (laughs) ”.

Would it have been too risky to try to win?

“My objective today was to win to be more in front in the championship. When I was leading I saw that Fabio was out on my pit board. So, I just tried to be smart and to push because when I was in front I just tried to push for a few laps. But then I saw my rear tyre started to drop a bit more, so it was very difficult to make a gap today. Then on the last lap when Rins and Marquez both overtook me at Turn 2, I said ‘Ok, if I will see a possibility I will take it, but I don’t want to take any risks’ because it was very easy to commit a mistake today.”

"I decided to use the medium tyre on the front because I couldn't warm up the hard one, but in the last 6 laps it was destroyed, I was losing a lot in cornering speed and I knew that the others would attack me. I didn't expect it to drop so much, but to manage the rear tyre, I might have pushed too much on the front. Now that the race is over I can say, on Friday I was struggling a lot due to the wind, I couldn't close the trajectories. In FP4 we made a small change that gave a great result, loading the front more. From that moment on I was able to be more competitive, but in doing so I wore the tyre more and this in the last laps prevented me from attacking ”.

Was the race all about management?

“A lot of times I said to myself: now I push, but I knew that if I did that I would lose, as happened to Martin after he pushed hard at the beginning. In the end, however, I destroyed the front tyre on the left side, the race was all about management. I didn't expect such a slow pace, but if I had lapped in 1’29" I would not have finished the race".

In the first few laps, however, you did not hold back.

"The lowering device did not activate and it was a bit more dangerous to start without it, because the bike rears up and it is more difficult to control. I lost a few positions and took risks to get back into the top 3 and then manage the tyres ”.

In the end, everything went well.

“As I said, I'm happy for the standings, but not too happy for the race. A win is always a win and that was my goal. Being first in the championship is important, but I don't want to gloat yet ”.

“With a lot of work, when no one gives you anything it gives you even more satisfaction and it was a motivation race after race. I said that such a recovery would be almost impossible, but also that we shouldn't give up ”.

Did you already talk to Stoner after the race?

"No, but for sure Casey will tell me where he realized I went wrong (laughs)".

Did you expect to have to fight at Phillip Island more than at other tracks?

“I imagined that here I would have struggled more. It is true that our bike is very fast on the straight, but we still struggle a little to get it to turn and we are missing a bit of traction in the maximum lean angle. I knew that the others could have an advantage, but I was still ready to fight for the victory ”.

In a few days in Malaysia the situation will be different.

“I think Sepang suits our bike well, there are restarts and a lot of braking, so we can have our say. In braking we are strong, even today I passed two riders braking at turn 4 and it gave me a lot of pleasure. We will be able to exploit our potential, but it is also a very critical track for the tyres ”.

You will have your first match point.

“For sure it will be very important, but I will just try to do the same as we did from the summer break. Just thinking session by session, doing a good job and being prepared for the race and then see if it will be possible to be crowned there.”

Don't you feel the pressure?

“Sincerely, if I start thinking about the pressure, I will put pressure on myself. So, I will not think about it. I will just be calm and do the weekend like we always do in the past in this championship. So, being smart will be the key for sure.”

What are your thoughts on the moment that Quartararo is going through?

“Honestly, I don't know what his situation is, certainly he is in a difficult moment. In practice he is competitive, but in the race his problems begin and even in qualifying he struggles more than before. I don't know what's happening to him, but the Yamaha right now has problems, perhaps because it has a less powerful engine ”.

On the podium you celebrated by drinking from your boot, in full Australian style.

“This weekend should be an example for all Grands Prix. It's great to arrive at the circuit and see all the fans around, so close to the riders, then there are many events, we should do the same in Europe too. I had never seen an invasion of the track from the podium, and it was incredible. The Australian fans are very close to our sport and I would like to see Mugello and Misano again like this, the public makes the difference ”.