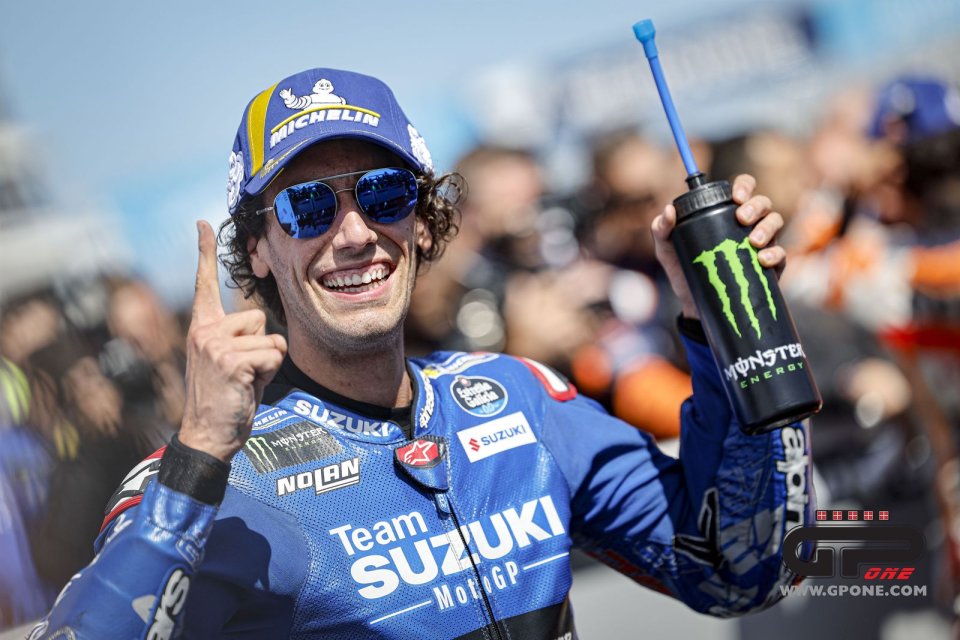 “Do not go gentle into that good night; rage, rage against the dying of the light,” quoted Michael Caine in the film Interstellar. If Alex Rins' victory at Phillip Island were to be summed up, it would be in the words of Dylan Thomas. Alex Rins had rage in abundance today, an unexpected victory for the Spaniard, who was able to thrill the crowds with his GSX-RR. After a difficult qualifying session, and making his way through Q1, Rins started from a non-optimal fourth row. The Spaniard did not desist, and already on lap 7 he worked his way into the lead of the race and began to duel with the Ducati of Bagnaia and the Honda of Marquez. The following laps went by with the outcome always remaining uncertain, with all the riders fighting each other no-holds barred, in one of the best races this season. Until the last corner then came the final dash, Alex Rins and Marquez had the same idea and overtook Bagnaia, who preferred not to risk. Finally, the Suzuki man got the better of Marquez and an outburst of joy overwhelmed the box of the boys in blue. A long-awaited victory for Suzuki, a flicker of pride if you want, with a bittersweet flavour, a moment of glory before the Hamamatsu manufacturer’s final goodbye from MotoGP next year. Two races from the end of a difficult season, the points might not count for much, but the victory counts a lot, albeit for different reasons.

You completed a sort of hat-trick by winning here at Phillip Island in each category. A victory that comes after a difficult period for Suzuki which will leave MotoGP next year.

"I’m super happy to finish on the first position. First of all it will be the last time with the Suzuki here at the Island – said Rins – I’m blessed that I got the first position for this and then for all the people that were supporting me during all the season, during all the bad moments. The team really deserves it and all the staff in Hamamatsu. It was a good race. I was feeling good since the beginning and I managed really well the rear tyre. When I was behind Pecco or in the beginning behind Martin, I was realising that they were riding a little bit too slow so I tried to stay on the front. I tried to open a small gap but taking care of the rear tyre without the spin. But then they overtook me on the straight so I decided to stay behind and arrive in the end of the race with a bit more. I knew that if I was starting the last lap in the second position that I would have some chances to overtake Pecco between corner one and two. We haven't seen such a hard-fought race like that since Moto3 days."

What made you so competitive in that very corner? We saw that you overtook a lot in that sector.

"Before the race, while with the team we were marking the critical points for the rear tyre on the track, in that corner we said to ourselves that the wear on the rear would not have made much difference and that I could have given everything, and so I did. I had very good corner entry speed getting the bike to slide enough to be able to make clean passes ".

It has been a difficult year for Suzuki and for you as a rider, so is this victory important, at least to end the season on a positive note?

“It was not easy for us as a team to know that next year the team is not continuing in the championship, so we had not so good races. Also, I was involved in some crashes with some riders, in Montmelo I broke my hand. So, the key was not to give up, we never threw down the towel. So, we deserved this victory. This one is for all the team, for the ones who got some contracts for next year and for the ones who didn’t. This one is for them.”

"It’s a good thing to take a win. We really deserve it and in many races we know our weak point which is qualifying.”

Alex then took the opportunity to give an overview of his team over the years, focusing in particular on this last season. The decision to leave MotoGP shook the team's mood and this seriously affected their results in the second half of the championship.

"I’ve been in MotoGP since 2017 and this is the fourth or fifth competitive year for me but Suzuki, myself, we were never able to make a good bike for one lap. We struggled to do it but in some races we had unbelievable pace and were forced to finish in fifth position, sixth position for this reason. The victory was quite nice. It’s sad that Suzuki is leaving but let’s leave with the victory."

You said that when you were in the leading group your rivals' pace was slow, but was it really slow?

"It's a matter of perspective. Simply looking at the time, we were all slower, as expected in a long race where managing tire wear would make a difference. But it was a calculated slowness to be able to get there with good potential in the last stages of the race, so it wasn't easy to maintain these rhythms anyway, otherwise the rest of the grid would have caught up with us. "

In your career you have achieved several victories, such as in Austin or Silverstone. Today you ran an amazing race, do you think it's the best of your career?

"Each victory is special. The first was obviously unique, I won at Austin against Valentino. At Silverstone I duelled with Marc and at the last corner with better traction I managed to overtake him. Here at Phillip Island it was certainly just as exciting to win. All of the riders were really close, there was a lot of overtaking, so it's among the best of my career, but choosing one that is better than the others is impossible for me. "