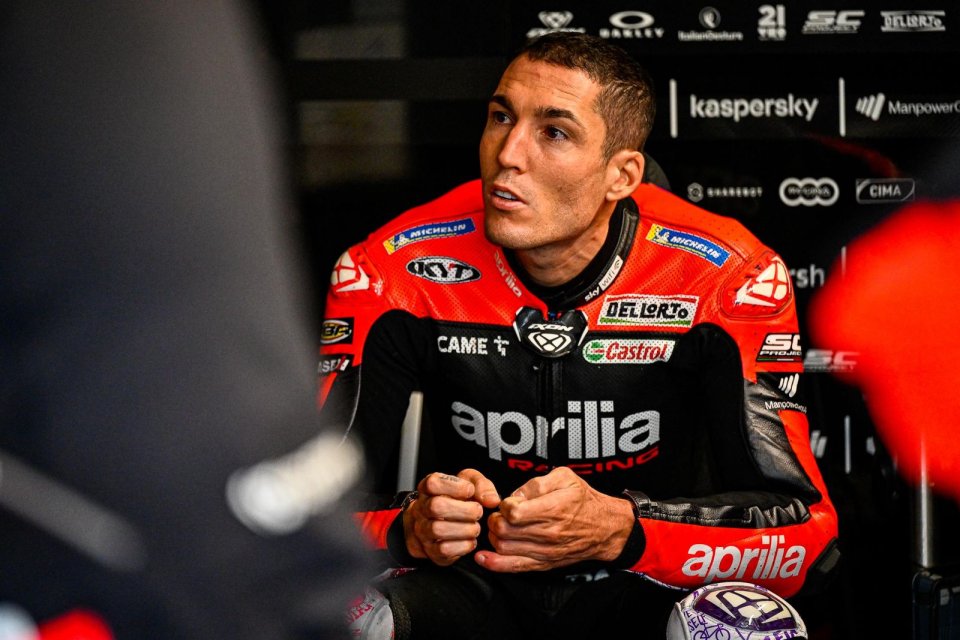 Sunday at Phillip Island might (irreparably) become a sentence for Aleix Espargarò’s World Championship dreams. He went to Australia with 20 lengths of a disadvantage from the now former leader of the championship, Fabio Quartararo. Since he had nothing to lose, he raced to keep the hopes of the Noale constructor alive. Yet, these attempts were not fulfilled with Aprilia Racing’s rider from Spain and his slow pace, which was only enough to get him over the finish line in a 9th position, after remaining in the lead group for most of the 27 laps of the race.

“We were among the fastest on the track, but I couldn’t accelerate in the final laps. The launch control would activate, cutting off power, so the bike wouldn’t t go any further,” Espargarò said. “I couldn’t do anything, and I’m very angry because I tried to preserve the tires from the start. I’m not sure what happened. I think Maverick had the same problem. We had the pace and, above all, the speed to aim for the win, or at least for the podium.”

Thanks to Pecco Bagnaia’s 3rd place, the lengths from the top of the general standings have become 27, with 50 points still on the line.
“The situation is more difficult. We made many mistakes in the past three races and have proven that we’re not good as a team, yet (ed. What did he mean? They each made a mistake.). We’re not ready to aspire to the title and, in fact, we’re scoring just a few points compared to the beginning of the season. Clearly, everything is still possible. We won’t give up. I’m still proud of my season. Two rounds from the end, Aprilia and I were racing for the title, but it won’t be easy considering that Pecco now has the advantage of more than one race ahead of me.”

The rider from of Granollers tries, in vain, to give himself an explanation.
“Like I said before, I had no acceleration, for some strange reason. In the first laps, the race was really slow, even if the tires didn’t excessively suffer in the second part. I noticed that almost all the riders lost just a few tenths off their pace from the start of the race, while we lost more than a second. We knew the tires would drop, but not to this much.”

Were the tires a factor that might have contributed to exacerbating the problem?
“We have to wait to see Michelin’s full analysis.”

The gap from Ducati has increased as the season continues.
“Until not too long ago, you described Aprilia as the new Ferrari, while I always knew what kind of bike they have. The RS-GP has clearly improved compared to before, but it’s not yet at the level of the references. Ducati made some faux pas at the start of the season. At some point, they seemed to pay the consequences, but then they changed their pace. Their result today is ... I’ll just say ridiculous. It’s frustrating to see so many Desmosedici up front (ed. 6 today in the top 10).”

Viñales: “I was slower than the the Moto2 at the end”

The mood was the same at the other end of the garage. Just like his teammate, Aleix Espargarò, Maverick Viñales also had to deal with a noticeable drop in performance during the second half of the race, while struggling at the fringe of top 10. The former Yamaha rider was  incredulous as he analyzed his 17th final position.

“The result is difficult to stomach. In the FP4 yesterday, with the same tire, I was one of the fastest on the track, and I thought I could race for the podium,” Viñales said, “Instead, in the finale of the race today, I was almost slower than in the Moto2. I can’t belive it.”

What happened?
“I have no idea. The first analysis showed nothing. We’ll do more in the next few hours. Racing slower than three or four seconds isn't possible. I don’t have much to add. I don’t want to criticize anyone. We need to stay focused on ourselves. We know that today’s performance doesn’t match our real potential.”