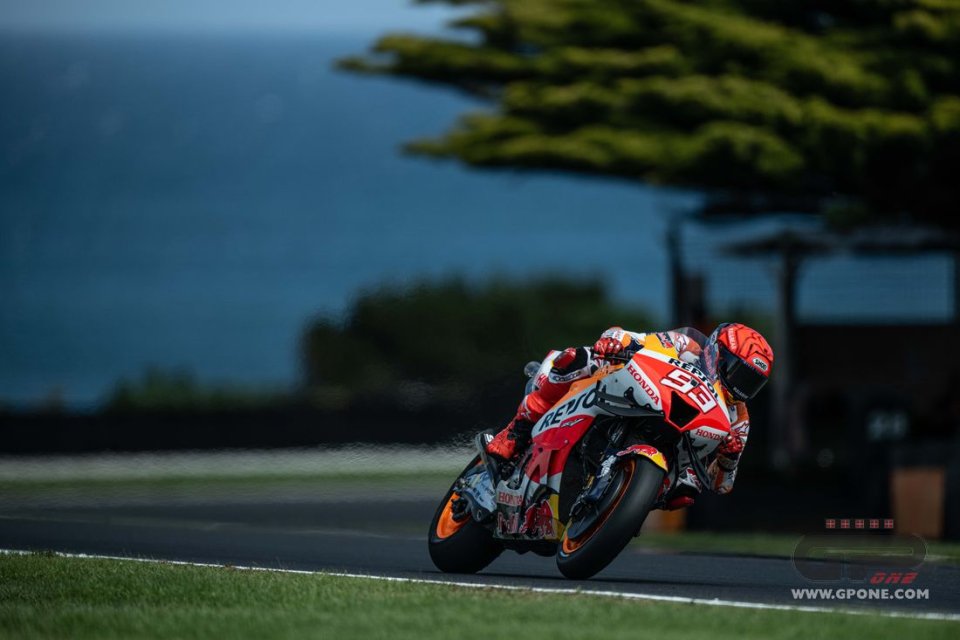 One of the most spectacular points of the Phillip Island circuit is Turn 3, which bears the name of Casey Stoner. There, the Australian rode his bike producing some fantastic images and his legacy was picked up by Marc Marquez. In the video below, you can see the two styles compared.

"I saw it too - Marc smiles - In that corner I copied Casey's style, because when I made my MotoGP debut I had his data at my disposal. Now, with these bikes and this aerodynamics, we need a different riding style. I talked to Stoner about it, the bikes have become different to ride, before you had to play with the body, while now you have to trust the electronics. The aerodynamics also make the bikes heavier and if you slide the rear too much it doesn't lose its effect, especially when braking. So everything is different, but Casey was very fast in that corner ”.

You don't seem very excited about the way MotoGP is evolving…

“The direction we have taken and which we will continue to follow, given that the manufacturers have signed an agreement with Dorna, I don’t like because now it is more the bike than the rider that makes the difference. The more things you put on a motorcycle, such as electronics and aerodynamics, the harder it becomes for the rider to hide the defects. This is the way and we need to adapt as best we can ”.

In fact, today you tried a new fairing and also the wings on the tail.

"Already in the Misano tests I tried a similar aerodynamic development and I had felt some positive aspects, but we decided not to homologate that new version because Honda was working to bring an evolution that I have received here. It’s true that it’s a special circuit to try these things – but one of the problems I have this year is, like, this heavy feeling in the front, the turning, and we are trying to fix – by the chassis, by the aerodynamics, by all the things. And today I tried many times the current one, the new one, with tails, without tails, and then I tried only the front part. We made a mix because like this they need to understand. I cannot work in another part of the bike so I stay with the set-up of Thailand and keep going – but I feel some positives, this was the most important.”

What are the improvements of this aerodynamic package?

"The new fairing does not improve the bike's ability to turn, but it gives different feelings. It seems to make it less physical to ride and this helps. In FP1 I did the best time with the old one, in FP2 with the new one, so both have positive and negative aspects. The good thing to try will be Malaysia, because here you don’t have long braking points, everything is flowing, so the crucial test will be Malaysia.”

Don’t so many tests risk having an effect on your weekend?

"Of course I am sacrificing a bit the result on Sunday. For example, today I chose the tyres according to the tests I had to do and I didn't work on the setup. Now we are in a moment and in a point that we are not looking for the best result of the weekend. Of course I will try to do my 100 percent, tomorrow and Sunday, but we need to understand also for the future. And I push Honda a lot to make things to try, so when I receive [those things] I need to try.”

Will you have more time for yourself tomorrow?

“I know that the other Honda riders, especially Pol, have gone in another direction, it's normal at Phillip Island with the wind to try to reduce the shaking of the bike. I have not made any changes to my set-up because when you try aerodynamic innovations you cannot change the balance of the bike. Tomorrow I think I will still use the new fairing, but I will work on the setup, even if I don't know anything yet. I will arrive in the pitbox tonight and they will say to me the plan. Now we are in the situation that we are working together of course, but if we receive something new then I need to follow the plan of Honda and my team.”

Are you satisfied with their reaction?

“When have you ever seen a new homologated fairing in 3 races? I can't complain about Honda, because they are working and trying hard. New things are arriving, which can be for better or worse, but they are trying and they have already told me that there will be more material in Malaysia. The gap can’t be recovered by itself, but by working and testing on the track ”.

Physically how do you feel?

"Another important thing about today is that I felt good from the start, there was an improvement in my physical condition compared to Thailand. When you see that I push immediately it means that I am fine, otherwise I am waiting to do it at the end. As I said yesterday, when I feel like this I give everything, I hope to stay at the same level until Sunday, I also know that there is the possibility of having a drop during the weekend, but this is the best strategy to make progress. "