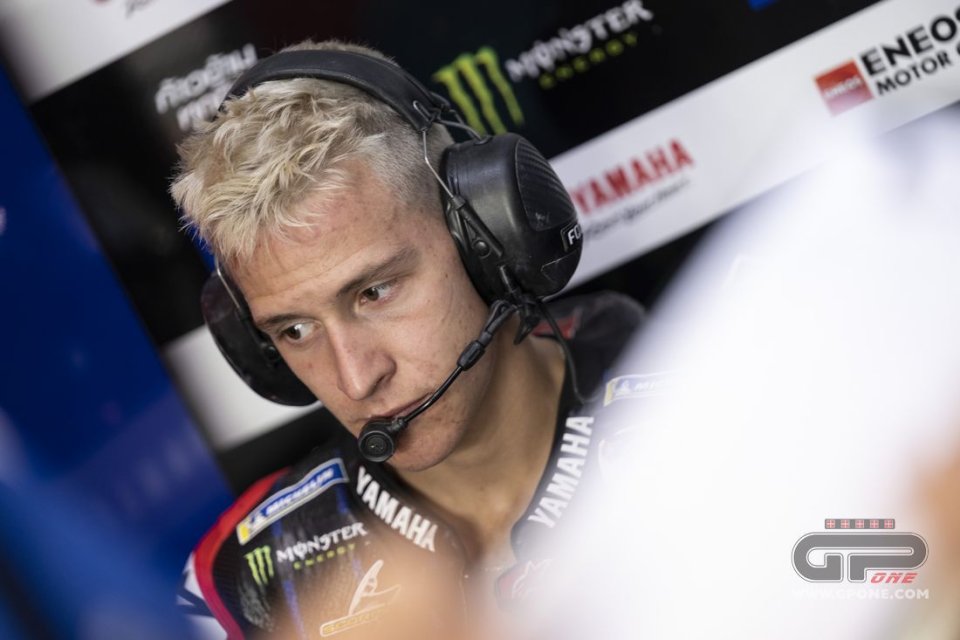 Seventeenth place in the last race in Thailand weighs down like a boulder, in the standings and psychologically, for Fabio Quartararo. A deafening press silence that followed the Thai race, very unusual for the young Frenchman, which illustrated exactly what everyone was already observing. The Yamaha rider in these last rounds of the championship has suffered from nervousness, seeing his big advantage in the standings, so painstakingly gained in the first half of the season, pulverized. Bagnaia's Ducati, or rather "the Ducatis", proved to be a difficult obstacle and, it must be admitted, a strategy that is bringing about the hoped-for results for the Borgo Panigale manufacturer. So we start from scratch, with a classification that sees Pecco Bagnaia just two points behind the Frenchman, with only three races still to be ticked off on the calendar, and a title that would eventually truly consecrate Fabio, in a season that is proving to be much more difficult and hard-fought than everyone had initially imagined.

The last race was very frustrating for you, so much so that you didn’t want to talk to journalists and came off social media. With a cool head now what can you tell us about that race?

“I expected a much better race of course – explained Fabio - We made a mistake from the beginning, starting with a really high pressure. At the end of the race it was tough. I took the decision not to talk to the media. I apologise to all the people who were in Thailand. It was especially tough, I had no feeling. It was a tough one.”

Now we are at Phillip Island, the Australian circuit is a favourite of most of the riders. We have not raced here since 2019, but even then you weren't able to gain much experience here due to a contact with Petrucci in the very early stages of the race. What are your expectations here for your Yamaha?

"It is for sure one of my favourite tracks, a very fast circuit. In 2019 I hurt my ankle in FP1 and then crashed in the race at the first corner. I haven't had much experience here in the past but expectations are high, I think I can do well ".

The classification sees you just two points ahead of your direct rival Bagnaia. With three races until the end of the season, the world championship is all to be played for, starting from scratch. Is it difficult to manage this pressure?

"Managing this pressure is not easy. I think we have to think about the championship, but actually I want to take it race by race because at the end it’s like the beginning of the championship right now. We are almost on equal points with Pecco, but I don’t only see Pecco. Of course, Aleix is here, Jack, Enea.”

In 2020 you fought for the title, and in 2021 you were crowned world champion. Does this experience of the last two years help in some way to manage these last rounds of the championship differently?

“2020 was a year where I was fast. We had of course problems in Yamaha. But apart from that, I was always looking at my first rival which was Mir at that stage. But last year when I won I knew I had to be fast in all of the circumstances. And having the title from last year, it brings me a lot of confidence and a lot more experience. So the experience of the last two years helps me be calm in this situation.”

Phillip Island has always been one of the favourite circuits for many riders, how do you explain it?

"The place is unique, in MotoGP you have less time to stop and look at the view, but in Moto3 I vividly remember the spectacle of the water on the horizon in some corners. In addition to this, on the technical side it is a very fast circuit, with some gradients and very fast corners, especially in the third sector up to the last corner. Turn 3, Turns 7, 8, 9 and the last turn are really fast, and I think that's why we like it. "

Do you think that the development of motorcycles in recent years will change the way we approach this track?

"Of course we will have to adapt as always, but I think devices like the rear lowering here have less impact, and probably won't do much."

In Thailand you had problems in the wet. It is possible that it rains here in Australia too, is this a problem that you have solved?

"In reality, I have never been fully comfortable in the wet. In Portimao and Motegi, however, it was not so bad and in Thailand I know I made a mistake so the rain itself doesn't worry me, I think we can handle it. "

This circuit with these fast corners could prove to be very conducive to the agility of your Yamaha. Perhaps one of the best tracks of the season for you this season.

"This year has been curious, because in the circuits where we thought we were having difficulty we achieved excellent results, while in those where we could theoretically be favourites, something often happened to put a spoke in the wheel. Now I face the season race by race, without thinking too much about how the circuits can be more or less favourable to my bike, what matters is the final result ".