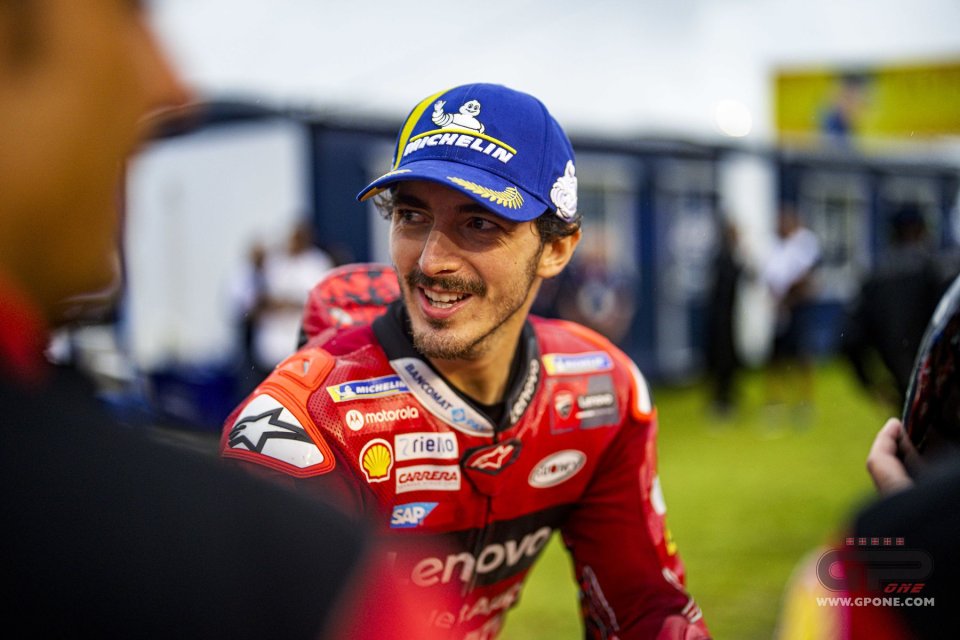 Pecco Bagnaia almost crowned a run-up for the world championship in Thailand that saw him comeback from -91 to -2 points from the leader in the standings Fabio Quartararo. We say almost because of the two points that still divide the Ducati rider from his French rival, who is certainly not having the best time on a Yamaha M1 that is often in too much difficulty compared to his rivals' bikes.

In this video published by MotoGP.com, Pecco analyses his season, going over the various phases, the ups and downs, the mental attitude and also the future that will see a changing of the guard inside the Ducati garage with the arrival of Enea Bastianini as his new teammate for the next two years.

"Firstly, I'm in my best shape ever in my career - said Pecco - in Moto2 it was different, I was fighting, always in front and it was a different situation completely. Now I think that in terms of speed and mentality I am better. At the start of the year the new bike was not so competitive, I was struggling a lot. We needed a lot of time to improve our situation and finally when we were back in Europe we started again to be always in front, I was always winning or podium, but I also committed so many mistakes. "

Bagnaia makes no bones about it, admitting his responsibility concerns the many zeros he has notched up in the standings.

"A bit of up and down, but the performance is there, we are so strong. But I lost a lot of points in the mistakes. When I was crashing before the summer break, I think it was because I was thinking in a wrong way. It was always because I was saying ‘now I relax’ and I was crashing, I was trying to understand why with my trainer and the people close to me why I was doing mistakes. Analyse everything together for me to understand how to get better".

Pecco also gave his view of the two main rivals for the title, namely Quartararo and Aleix Espargarò.

"Fabio in the moment is still the man to beat, he is one of the strongest riders and is world champion. But now I'm in a better situation than Fabio, I feel great on my bike, I feel I can push and attack. He is suffering a bit more with the bike. It is true that our bike is more complete. If we look at the other riders, Aleix is ​​very constant, but he’s not doing the difference, like in Argentina. Sincerely it is strange this championship, the high level we have, all the bikes are competitive and also all the riders make mistakes, this makes it happen."

A few words also about Enea Bastianini, his future teammate.

"I think Enea is a great guy, great talent, very competitive and very fast. He'll have to learn how to work in a factory team, like I had to do this year. But it's something you have to do, you have more responsibility and at the start it is not so easy. But he is quite smart and will know what to do. "

Finally, Bagnaia's considerations regarding team orders that could come from Ducati.

“I know my potential and I know that I can win without help in a race. For sure in the last two races, in terms of the championship, some good help will help. But this year I won six races because I was the strongest and not because someone let me pass. I think team orders are good for sure, but it's not already the moment to have it. I will try to consider this rest of the races as if they were normal. I would like to attack and push, don’t think about the championship and do my work. Then when there will be the last opportunity to win, I'll think of everything, but at the moment I don't want to. The only way possible to be happy is to win. For sure it would be my biggest dream to win it with a bike that already 15 years without a win. It would be something incredible. "