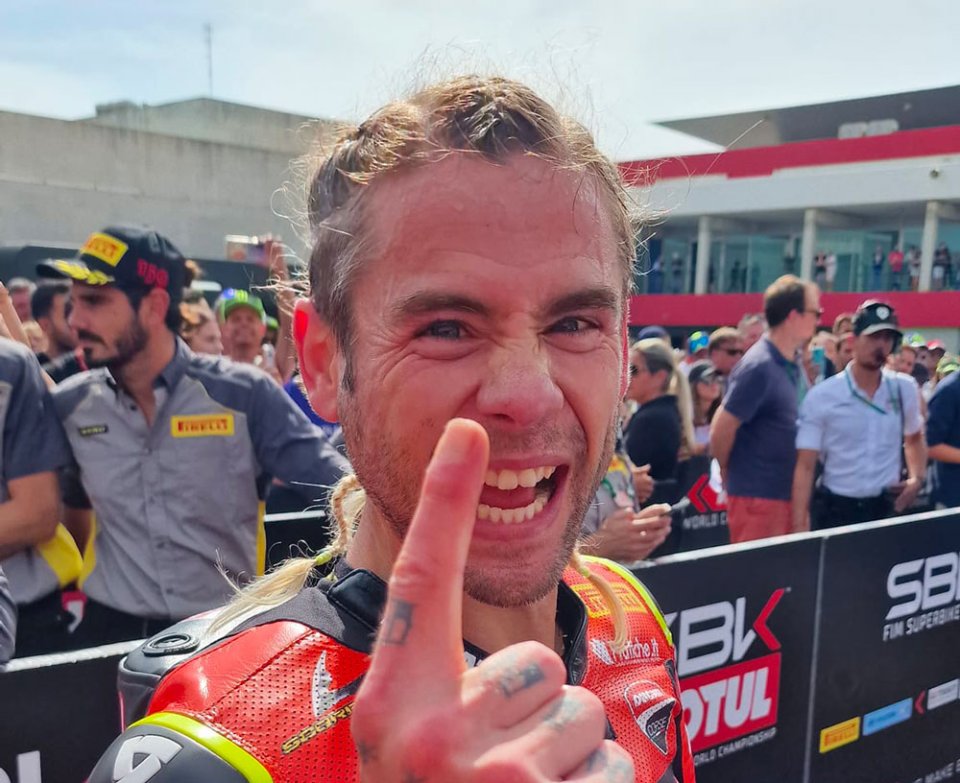 Alvaro Bautista finished the weekend in Portimao with a flourish, with a victory. On a track where Razgatlioglu comes good, Ducati’s Spanish rider limited the damage in the best possible way, conceding just 3 points to his rival. Thus, he will arrive in Argentina in less than two weeks with a lead of 56 points over the Turk, which becomes 82 when it comes to Rea. The title is not in safe hands yet, with three rounds left, but it’s on its way.

In Portugal, not even Bautista expected to win, especially this morning's race and he described his success in great detail: “Before Race 2, I thought that Toprak was very strong in the morning. Yesterday, after the first race, I felt stronger, but after the Superpole Race, I thought he had more. For that reason, I started without a strategy, simply observing what would happen. When Jonathan was first and Toprak second, I saw him very relaxed and thought he was waiting, without stressing the tyres. I realized that it wouldn't be a good idea for me to let him do that and that's why I took the lead and lowered the pace. If anyone could follow me, he would have to wear out the tyres and then I would have had a chance to fight for the win. I did this and it worked, I'm happy, but I didn’t think about it before ”.

Twenty-five well-deserved points but, half-way between serious and facetious, he was asked if now his opponents won’t say that he consumes the tyre less because of his weight.

“It's the package that makes the difference: rider, bike, electronics - answered Alvaro seriously - For example, at turn 5 I had to take a tighter trajectory than Toprak's because I struggled more than him to stop the bike. They are different bikes, but also different riding styles and it's always a combination of things. Yamaha and Kawasaki have more cornering speeds with closed throttle, you notice it in the downhill corners, how they have more load, I can't do their lines, I have to turn the bike on the gas ”.

The Spaniard is not happy when he hears that all the credit goes to the Panigale V4, a bit like what happens in MotoGP where the Desmosedici seems to do everything by itself.

“I haven't tried a Ducati MotoGP in a long time. From the TV it seems that it is an easier bike than years ago and there are many riders who win on the Desmosedici, here only I do it - he underlined - The bike is good, but only one rider wins in SBK and this is the reality. Everyone says it's all thanks to the Ducati, but the results of the two Kawasaki riders are closer to each other. You have to look at everything, not just the rider who wins ”.

It goes without saying that even the possibility of limiting the engine performance of the Rossa put forward by Razgatlioglu does not go down well.

"I think they already took some revs from us 3 years ago and never gave them back, we still have 250 less - recalled Bautista - In this world, with this technology, manufacturers must always try to improve, as the riders do. It's Yamaha and Kawasaki who need to get closer to Ducati and not the other way around. I'm not the one who makes the rules, but in MotoGP I've never heard Quartararo ask to reduce Ducati's power or Honda's agility, he just tries to push Yamaha to make a better bike. In the end, we will have to adapt to what the FIM decides "

On the possibility of introducing the minimum weight by adding those of the bike and rider he was even more clear.

“There is no point in adding weight to these bikes. If I added 20 kilos to mine, in the event of an accident it would take longer to stop and the run-off areas would have to be increased" he said before reiterating the concept: "the level of the championship is very high, today we lapped just a few tenths from the pace of the MotoGP bikes and the bikes must be at the same level as the riders”.

In fact, Alvaro is still not entirely satisfied with his Panigale V4. Razgatlioglu asked Yamaha for more horsepower for next year, what would he need instead?

“I need Yamaha not to listen to Toprak - joked Alvaro - We have some ideas for next year, I would like to improve the acceleration phase because in that phase I feel the bike very light, we need more stability. It is the biggest problem, if we solve it we can improve our performance in general. I have already talked about it with Dall’Igna, he calls me after every session, every race, every test and he knows what I think ".

Now a weekend of rest awaits him, before flying to Villicum.

"I'm not sure how the Ducati will go on that track, everyone says there is a long straight but it's only part of the track - he explained - I don't know what to expect, I want to get there and understand my level. I've already looked at last year's races, I like doing it, I have less experience on that track, but I'll think about it next week. Now I enjoy this moment ”.