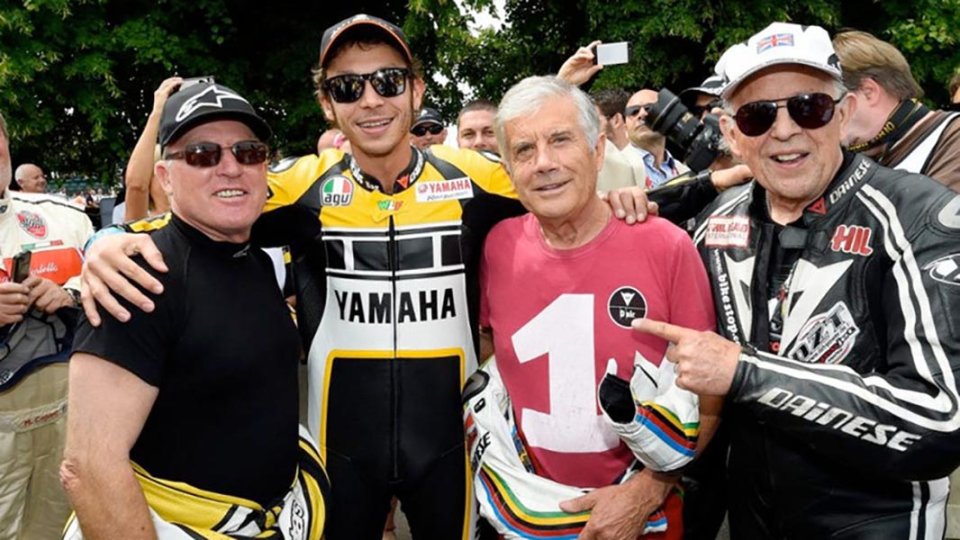 He passed away today, in his sleep as reported in a family note, the Prince of Speed, Phil Read (pictured with three other legends: Kenny Roberts, Valentino Rossi and Giacomo Agostini) . Few sportsmen have risen to the role of legend, in the true sense of the word, while they were alive, and one of them was indeed 'Rebel Read'.

He was an iconic character, Read and also a man who never spared himself, either on the track or in life. Contrasted in the latter part of his career with our own Giacomo Agostini, he could not have been more different character-wise. Tough on the track, when circuits and equipment were not what they are today, Phil Read was a reference in every category in which he rode. He won a world championship in 125, with Yamaha, battling against teammate and rival Bill Ivy in a controversial championship in which the Iwata company had decided by table that the titles would be equally divided between the two, instead Phil, it was 1968, snatched the title from Ivy by also winning in 250, a class in which he had also won the world title in 1964 and 1965. Phil then added another title in the quarter-liter in 1971 and, having switched to MV Agusta as Mino's teammate, won in the 500 in 1973, leaving Ago with the 350 title.

The story of the enmity between Giacomo Agostini and Phil Read, teammates at MV Agusta in 1973, is now legend.
After the last world title won riding the three-cylinder 500 with Alberto Pagani on the team, at the end of 1972 MV decided to pair the great Ago with Englishman Phil Read. A rider known for being tough.
Between the two it was hatred at first sight and in the year in which Jarno Saarinen's star rose and dramatically disappeared at Monza the pair did battle: Read won at Hockenheim, Assen, Anderstorp and Jarama. Mino Francorchamps, Brno and Imatra. At the end of the year the title went to the Englishman, and Agostini left MV Agusta for Yamaha. Read replicated in 1974, Agostini won his first title with Yamaha in 1975.

Statement by the Read family regarding Phil Read MBE.

It is with incredible sadness that the Read family reports the passing of Phil Read MBE while peacefully asleep on the morning of October 6th, 2022, at his home in Caterbury, England.
Phil is best known for winning Yamaha’s first world championship title in 1964 with four more Yamaha-mounted titles including one fought as a privateer, plus two premier class 500cc world championships in 1973 and 1974 for the Italian MV Agusta marque.
Often a controversial and outspoken figure, his prolific racing career included 52 FIM Grand Prix wins and eight wins at the iconic Isle of Man TT Races. In 2002 he was granted the status of “MotoGP Legend" by Dorna.
Phil is survived by his sons Michael, Graham, Phil Jr, Roki and daughter Esme’. Further details on any public celebrations of life will be shared.