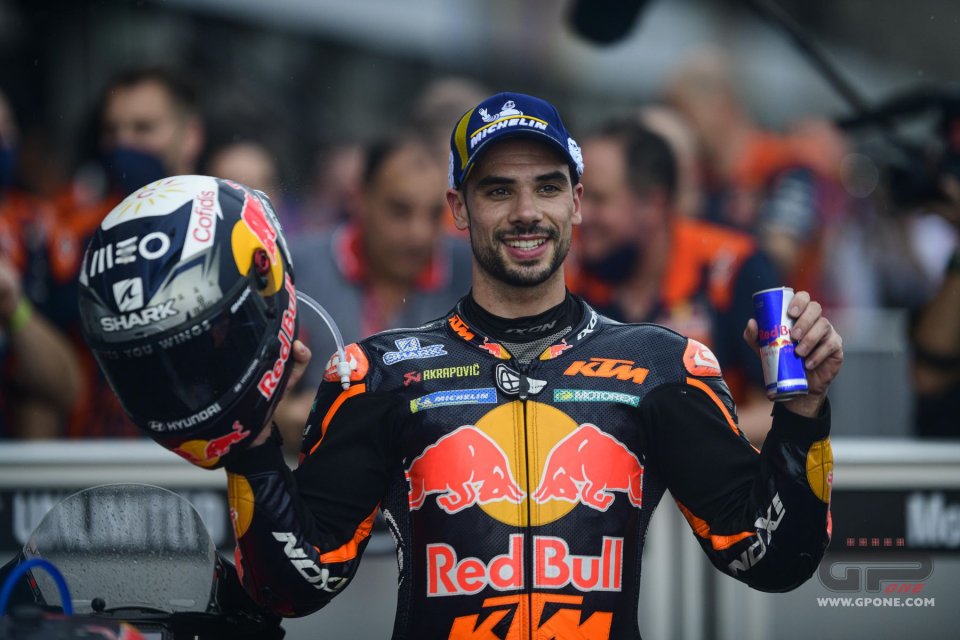 This year's MotoGP offers few certainties, but one seems absolute. When it rains, Miguel Oliveira wins. The Portuguese rider in fact triumphed in Thailand by repeating the splendid success achieved at the beginning of the season at Mandalika, in very similar conditions. A result that also allowed him to climb several positions in the championship standings, reaching 8th position overall when there are three races left until the end of the season and also the end of his experience in KTM.

In fact, Miguel is preparing to get on the RNF Aprilia next season, handing over his KTM to Miller, who gave him a hard time in the race today. His first words are about this bike change.

"I don't know if I will have any regrets - Miguel told Sky TV - There are some things that only time can tell you. For sure there will be a great effort on both my part and Jack to adapt to the new bikes. I think it will be particularly difficult for him, but everyone has their own times. I hope to be able to exploit the potential of my next bike to the maximum. In the end there have always been some changes in the riders on the grid and that's the way it goes. "

In the wet you are unbeatable.

"We have known for a year what kind of bike I like to ride in the wet and the team knows how to set up the bike for me. I have learned to understand how to stay on the limit without making mistakes and this leaves room to go fast in these conditions. I also think I am very calm, my mind is free because I have nothing to play for in the standings and so I just wanted to have fun in this race by doing my best. "

Do you think the KTM still has a lot of room for improvement, maybe more than Aprilia?

"There is room for improving the KTM, but I believe that today there is no easy bike in MotoGP. I think there are teams that do a good job to get the bike right for each rider, to exploit all the potential that each bike can give. I think sometimes I have managed to exploit the potential of the KTM well, Brad Binder several times has been better than me in this, also because he has a different riding style to me. I tried to bring the bike towards me, instead of adapting. But I'm happy to embrace another project and next year's bike will be very competitive. "

What was the hardest thing today?

"It was a difficult race from a mental point of view, it always is when it rains. You can't make mistakes, it doesn't take much to crash. I felt at ease, but I would say not too much, also because Jack put so much pressure on me at the start of the race and it forced me to always stay in attack mode until the last corner and I think that was good. The start of the race was tough for all of us, you couldn’t see anything in front on the straight. There was aquaplaning , but it was a good victory, my second in the wet ".

In some places Miller was stronger than you.

"I think Jack was much stronger than me in braking, especially in turns 1 and 3. But I could have taken him at 6 and I was also surprised by that. I was close enough to figure out where to pass him, so I tried after following him for a few laps. I had the opportunity and did the classic block pass ".

Do you think you are so fast in the wet thanks to having the right set-up?

"I don't know why we are so fast in the wet. Already last year we found a wet set-up that works very well for my riding style, it allows me to squeeze the bike. I think that's the explanation. Maybe this allows me to have an advantage when we do the various sessions in the dry and then we race in the wet, because I can be very fast right away. At Motegi we spent a lot of time in the wet and everyone was already close, because everyone was able to find the right set-up and the level was higher for everyone ".

Here you were fast even in dry conditions though. Do you mind leaving KTM right now?

"I was fast even in the dry at the end, I felt I had good potential. Of course it is sad that my adventure in KTM ends at Valencia, but I am also happy to be facing another challenge. MotoGP is a difficult category, you don't jump on one bike and it's better than the other. We always talk about it among ourselves, everyone thinks that the other bikes are better than their own. But in reality I believe that the important thing is to have a good team around you, which helps you interpret each bike. I think this is the key in today's MotoGP. "