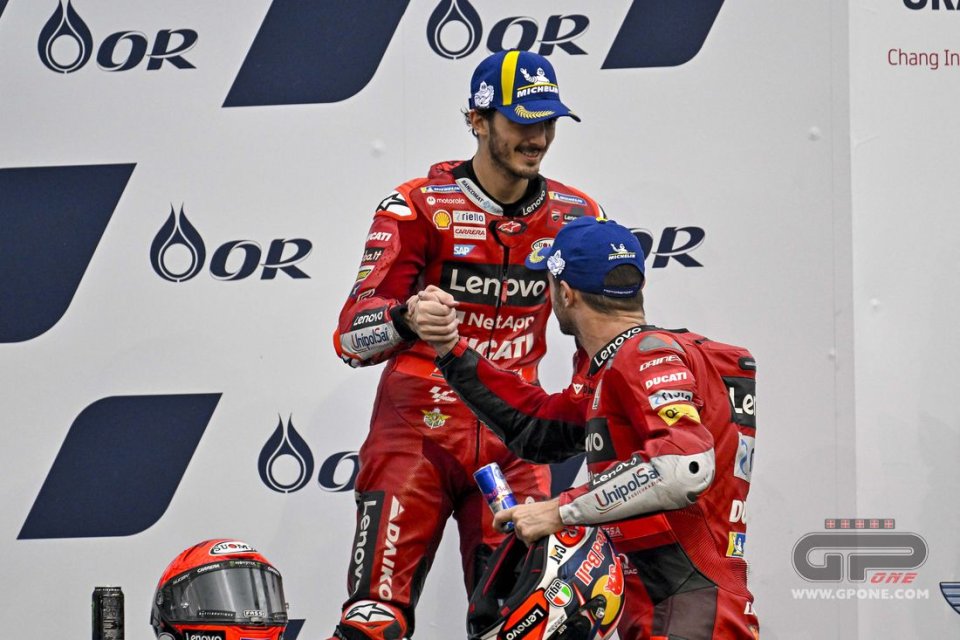 This Thai Sunday could have been another dark day for Bagnaia, but he turned it into a success. In the morning he was radiant with his warm up in the dry, but the rain decided to mess up his plans. Then, on the grid, right in front of his eyes a person was suddenly taken ill, disrupting the bubble of concentration where every sportsman takes refuge when he has to compete.

At the finish line, however, he saw all his efforts paid off. With a podium that put him just 2 points from Quartararo, who was shipwrecked in the wet of Buriram.

“I am very happy, honestly finding concentration on the grid was not easy because of what happened - he began - From the moment the race started I just tried to stay as close as possible to anyone in front of me. I knew that my potential in the wet was not the same as Japan, I thank the team for following up on my requests ”.

Didn't you have any doubts?

“Sincerely, I wasn’t so happy when I saw the rain. This morning in the warm-up I started with the tyres I’d use for the race and everything was perfect, I was able to do a good pace. So, I was perfect for the race. Then when I see after Moto2 race that it was starting raining, I was a bit upset. So, I had the luck Jack came to me and gave me some advice. I knew I could be in the top 5 in dry conditions, not like what happened in Mandalika or Motegi. This is good. It was more or less to believe in myself in the wet.”

You were also fast at Buriram…

“Today the anger after Japan helped me stay close to Miller and Oliveira, who are, with Zarco, the best riders in the wet. I was sure that following them would be a good idea, I struggled only in the last part of the race with the front tyre, but I think it was the same for everyone. "

Marquez gave you a hard time.

“There was a moment when I had a second on Marc, I was trying to follow Jack and Miguel, but they were too fast. Marquez caught me and tried to pass me, but I saw that he was struggling under braking and I concentrated on that point. I think that's why Zarco didn't attack me, I was strong in braking and it would have been too risky. In our situation it is good that he did not take certain risks, I have already thanked Johann and his team”.

Did you know that Quartararo was outside the points?

“Already from the last race I asked not to know anything about Fabio from the wall. I was 18 points behind him, I needed to concentrate only on riding ”.

But now it’s only two points between you ...

“For sure now it will be more intense. The last three races I will have to be very, very intelligent and smart in all of the situations because I think our potential is very high but I can’t make mistakes like I did in Japan or before the summer break. So, be smart, try to understand every situation. We already know in Australia the forecast will be very cold, so we will have to adapt. But anyway, I think we can be very competitive.”

How difficult was this weekend?

“I gave everything I had. Yesterday, after qualifying, I felt a bit of tension, but the people who love me gave me a hand. I called Carlo and Gianluca, the trainer and manager of VR46, then my partner Domizia before going to sleep. I was 100% focused on this race ”.