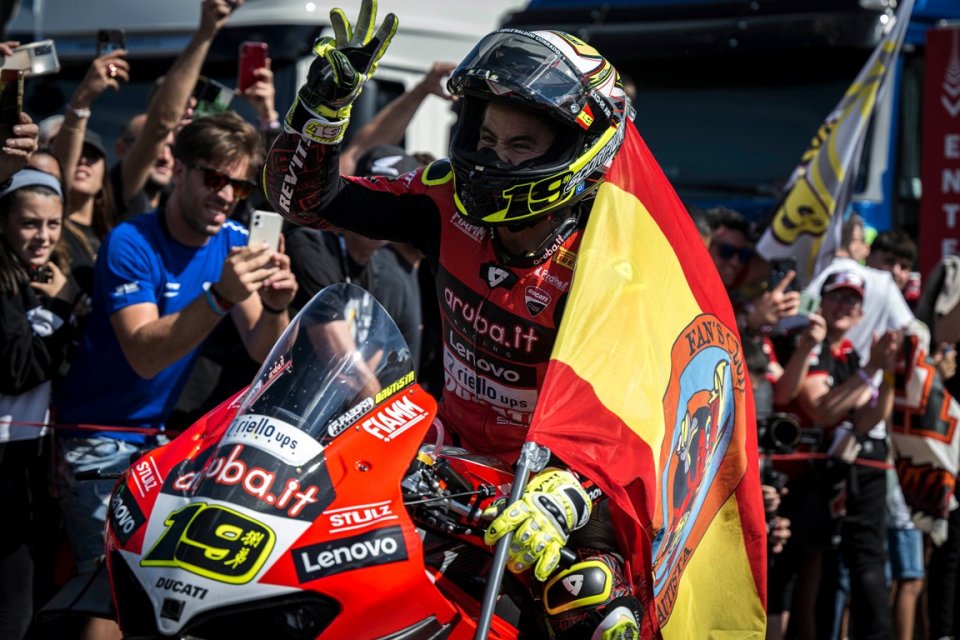 The triple win scored in Barcelona was certainly a hard blow on the World Superbike. After Magny-Cours, Alvaro Bautista’s advantage over his pursuers in the World Championship rankings was 30 points. Now it’s 59.

Apparently, the Catalan round paved the way for Ducati’s Spanish rider towards winning the title that the Borgo Panigale constructor hasn’t seen for 10 years. Right now, Alvaro prefers not to pronounce the words “World Championship”, even if he can’t wait to be able to give Ducati that long-awaited triumph.

The fact is, at four dates from the end, it is doable. And now, more than ever, it’s something to think about in this damned World Championship, with  many reasons for this. Besides the point advantage they have in the Championship, Alvaro and Ducati have always been competitive on every track, without ever suffering the blow. Also, Alvaro has demonstrated an unbelievable perseverance, to the point of boasting a fourth place as the worst result so far in the Championship, with the exception of when he withdrew at Donington and Magny-Cours.

To this, we add the calendar: the most insidious stages are now behind them. There are circuits like  Portimão on the horizon but, above all, the grand finale in Australia, which could become a sort of Barcelona 2.0-style remake in favor of  #19.

Currently, the situation is clear: with an advantage of 59 points, the math says that if Toprak were to win all the races from here to the end of the season, and Bau Bau always comes in second, the latter would have the title in his pocket with a seven-point difference. This aspect already goes to underline the fact that the Spanish rider would no longer need to be forced to climb the top step of the podium, while all the pressure remains on the rivals.

Obviously, we find it hard to believe that the Aruba rider will decide to call it a day right now. If anything, the idea is to begin attacking again, starting from Portimão, with the intention of keeping intact or increasing his advantage in view of the triple win outside Europe, in Argentina, Indonesia, and Australia.

The last of these three is undoubtedly the one that most appeals to Bautista. Phillip Island has, in fact, all the winning cards to enhance the potential of the Ducati V4, and the Spanish rider is well aware of this.

The competition has, therefore, been warned: never before has the title seemed to be Borgo Panigale’s.