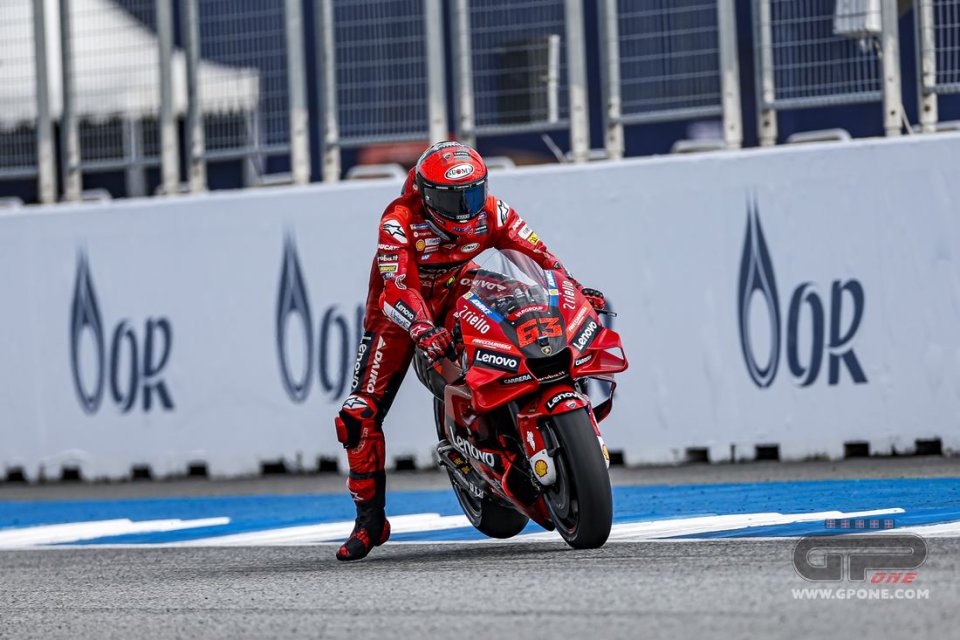 Pecco Bagnaia needed a good result to dispel the doubts accumulated at Motegi and, after Friday in Buriram, he can say that he has hit the target. The second quickest time satisfies him, as well as his pace, and now he knows that - at least in dry conditions - in Thailand he will be able to have his say.

"Sincerely I am very happy because this morning I was worried - he confessed - I started off and my feelings were similar to those in Japan, I did not like the power delivery, and we had to reconsider some things. Together with the team I worked well, we made the right choices and in FP2, from the beginning, I had great confidence with the bike: my pace with used tyres is quite competitive, one of the best, and the flying lap went well, even if there were strange conditions. I didn't make any big changes but on the whole bike ”.

Compared to three years ago, it is a completely different story.

"In 2019 I was another rider, I struggled under braking and made many mistakes, but I remember that it was difficult to make the bike turn in certain points - explained the Ducati rider - Now, however, it went well immediately and even better in the afternoon after a few changes to the setting. The third sector is no longer a problem, even if we lost some speed on the straight, the KTM is the strongest in that respect. "

Bagnaia still does not know for sure who he will have to contend with on Sunday, but he has half an idea.

“I think Marc has a good pace at the moment, similar to mine – he indicated as one of his rivals - It's difficult to know now because all the riders have done different tests with the tyres, even Zarco is very fast. However, seeing the step forward that Marquez made between FP1 and FP2, I think he can be competitive, as always, you must always put him in the fight ”.

Pecco, however, has already worked today thinking about the race.

“We focused on the soft tyre because it doesn't seem to have a big drop. At the moment it is difficult to understand which tyre is better, having two dry laps helped us anyway. "

He also had time, in FP1, to try to do some strategy with Luca Marini. Even though it didn't go according to plan.

“When I saw that he was about to go out, I thought I'd wait for him to put an extra Ducati in Q2, but in the end he was in front of me. We didn't understand each other” he shrugged.

Before leaving, Bagnaia also talked about the 2023 calendar, which has just been released.

“I still have to take a good look at it. I saw that we will go to India and not to Aragon, which for me is not the best - he joked - Anyway we did 4 races in Spain and it is right to introduce another country, I'm curious to go to a new circuit. We will certainly spend a lot of time away from home next year ”.