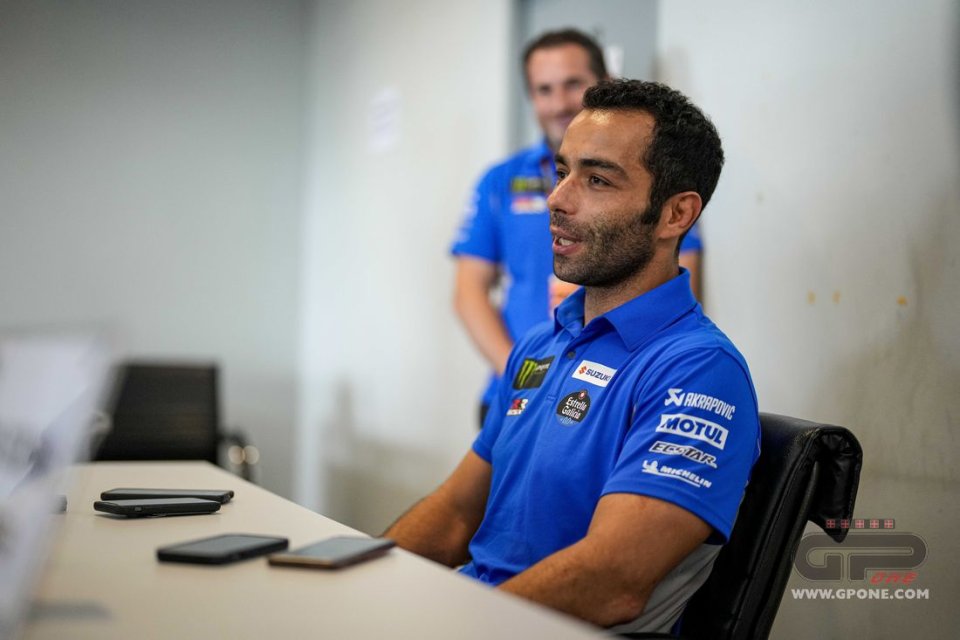 A few more hours of waiting and then Danilo Petrucci will finally be able to get on the Suzuki for the first free practice session of the weekend. There is a lot of anticipation on the part of Petrux for this new challenge in Thailand with the GSX-RR.

He will have the task of replacing Joan Mir and as a result there is a lot of curiosity about what awaits him, especially after having been around the world in the last few days.

"I get the call before the race last Sunday in Alabama, when I was still fighting for the title – he said - So, I said 'let me think about it because I am retired now and the race in Thailand was tough when I was fully fit. Now I am an old man it will be even tougher'. So I said 'OK, we will go'. I cannot wait to jump on the bike because it's at least something where I'm alone and I can manage, even if the bike is completely different."

Danilo left Atlanta on Monday to arrive in Buriram yesterday.

"I left the hotel at 6 am and arrived in Buriram at 2 pm local time. From that point it was like putting myself in a washing machine, as this was supposed to be my vacation week. My brother and I were scheduled to go around New York, but everything fell through, because he had to go back to Italy to get my leathers and then bring them here to Buriram. Let’s hope they arrive in time (smiles) ".

This sort of adventure will forever remain etched in Petrux's mind.

“I simply can't explain how emotional I am because not even an Alfred Hitchcock story could have had me racing the Dakar with KTM, then I go to USA with Ducati and then coming here with Suzuki – I don't think no one has ever done this! This is the greatest gift I could get from the racing world and I will forever be grateful to motorcycle racing”.

Now all that remains to do is to get on the Suzuki with one eye obviously on the weather.

"I hope it will rain forever till Sunday four o'clock because at least the race is less physical (smiles). I hope it will rain, because I was already so scared when I was coming here for MotoGP because the race in the dry condition when it's so hot it's one of the worst things a human being can try. I just want to enjoy, finish the race. I think it's difficult to not finish in a position that is not last. But maybe the bike is so, so good that I will find the way and stay close to the other guys. I just want to push to my best but I don't care about the result, even if I want to go fast. I said the same when I went to the Dakar."

Speaking of Dakar, the Terni rider continues to remember the Raid.

“At the Dakar I was able to test the bike before racing, despite being injured. Here, on the other hand, I will have to learn a lot, including all the buttons, since they are different from the Ducati of MotoAmerica. In my career I have always ridden V4 engines except at the time of the Ioda, a CRT. I haven't had a chance to sit on the bike, but they showed me all the things and the devices are in different positions, we can't make any modifications. It is different and I will have to concentrate on set-up and balance ”.

Almost a year after the last time, Petrucci is therefore back in MotoGP.

“The 2021 season was one of the most difficult seasons. For me it was like doing two seasons in one between MotoGP and preparation for the Dakar. Then the injury complicated things a lot, since I got to the start of MotoAmerica not in top shape. But now I'm here, happy and enthusiastic, as I can't wait to get started ".