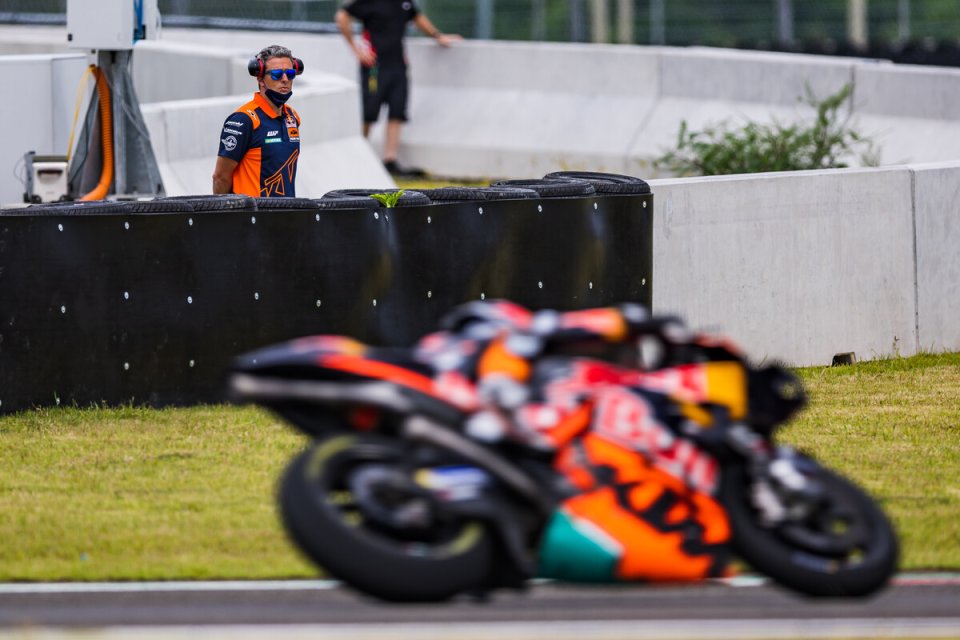 Brad Binder's podium in Japan broke a fast for KTM that had lasted since Oliveira's victory in Indonesia. Thirteen races in which the men in orange suffered without being rewarded for their hard work. "We desperately needed it," said the South African and team manager Francesco Guidotti couldn't agree more with him.

"We have been close to getting there many times, at Aragon Brad was virtually on the podium for 21 laps out of 23 of the race - Francesco remembers - We needed it because an official team should go there almost every Sunday, instead we came from 10 races in which we were just close and that doesn't count. We needed it for morale, for the sponsors, to get some answers to our technical development, I agree with Brad. "

For many, Binder is a surprise.

“He is having a truly amazing season, sometimes we missed the podium just because of bad qualifying, if you look at the lap times he often had the pace to stay ahead. When he got off to a good start, if he didn't make the podium he came close. In Japan it was important, starting from the front row, to confirm this trend ”.

Is the KTM a better bike than we've seen?

“No, because we have to be realistic and concrete: we are not able to do good qualifying, most likely due to a limit of the bike. So on the flying lap we have to improve our performance and give the riders something simpler, they have to be able to risk for a lap, like all the other riders do, while at the moment they don't always have the confidence that allows them to do it, to get into the first two rows ".

Until a couple of years ago, KTM seemed to have reached the level of the best, then what happened?

“We have to realize that this is still a very young project compared to those of the competition. Until a few years ago in KTM the culture of this type of motorcycle was almost absent, while Honda, Yamaha, but also Aprilia and Ducati have a much longer history in MotoGP. It is clear that 2020 was a particular season in many different respects and KTM was good at playing its cards by taking advantage of the opportunity to test in various circuits before the races, being still under concessions. They were good, because there were also other manufacturers in that condition and they failed to do the same. In addition, there were tyres that “favoured” performance in those circumstances, I am referring above all to the front end, and now they are gone. Also, being a very young project, there were people involved who, if you allow me the term, were rookies and losing the concessions for them was a big blow. Reorganizing and resetting the whole test program was probably one of the causes of losing the plot”.

"It is one thing to get to a certain level of performance and another to improve it, to shave off the last tenths, if not hundredths. The working method needs to be changed and the structure revised, which we are doing. We hope to reap the benefits soon ”.

2023 will be a decisive year, should we expect a revolution?

“Not a revolution, but certainly substantial changes because improvements, whether small or large, need to be made. As we have seen, all you need is a somewhat uncertain year, as was the case in 2021 for KTM, to make you lose the following season as well because you have to understand where to start again. It is always important to continue to grow, even if in small steps ".

What are you working on right now?

"We are re-adjusting our aim and reinforcing some areas where we have been a bit lacking in recent years. I expect a good improvement, not something small, but then you always have to deal with the progress of your opponents. This year we have improved more than the others on race distance and lap time, but it is still not enough to be with them every Sunday. We must continue to make bigger steps forward than our rivals ”.

There might not be a technical revolution, but you have already done it with the riders. Only Binder of those who race this year will remain: Pol Espargarò will return and Miller and Augusto Fernandez will arrive.

"From a growth perspective, this has been a somewhat particular year. Having four riders who only had experience in MotoGP on our bike can be a limitation. We had to look around to put together a more varied line-up: Binder is the cornerstone of the team, for Miller KTM will be the third MotoGP bike he will ride, Pol will return with two years' experience on another bike, while Augusto will be able to enjoy his debut season without pressure and we will try to make him grow without haste ”.

2023 will be the debut year for the Sprint Race, do you like this new format?

“I don’t mind it, it's an innovation that makes sense. The track time will not change, we have been doing three free practice sessions for 10 years now, which are virtually qualifying, in the end it is better to do one more race. Friday will be dedicated to set-up and then setting the time in the last 15 minutes, perhaps it will be a more productive day. Saturday will be very busy, with free practice, qualifying and racing. We are here to race, so we don't mind having one more race ”.

Let's talk now about this season finale and about a rider that you helped to debut in MotoGP and now you see him fight for the World Championship: Pecco Bagnaia. How do you see his mistake in Motegi?

"I agree with what he said, in my opinion he did well to try, he had to do it, but he did it in the wrong way and with the wrong timing. He made a mistake dictated by over-enthusiasm, he could have overtaken Quartararo but not at that point. He screwed up the braking point so much that even though he crashed he didn't even come close to it, he came close to it from too far away. He paid for the mistake, but you shouldn't put a cross on his back, he will have the opportunity to make up for it. He got caught up in the tension, perhaps because as a methodical rider he found himself in a situation he didn't expect, but if he hadn't tried he would have been criticized for not having done so”.

Who is the favourite?

“In my opinion it's the one who is in front. Anything can still happen, but with 4 races to go, it's better to have an 18-point advantage like Quartararo (laughs). Just starting behind can mean you remain there, it is true for Pecco, for Fabio, for Bastianini. Comebacks like Aleix's in Holland are more unique than rare ”.

Guidotti: "KTM is open, for us journalists can stay in the pitlane"

Gigi Dall'Igna: "Losing the best engineers is the price to pay"