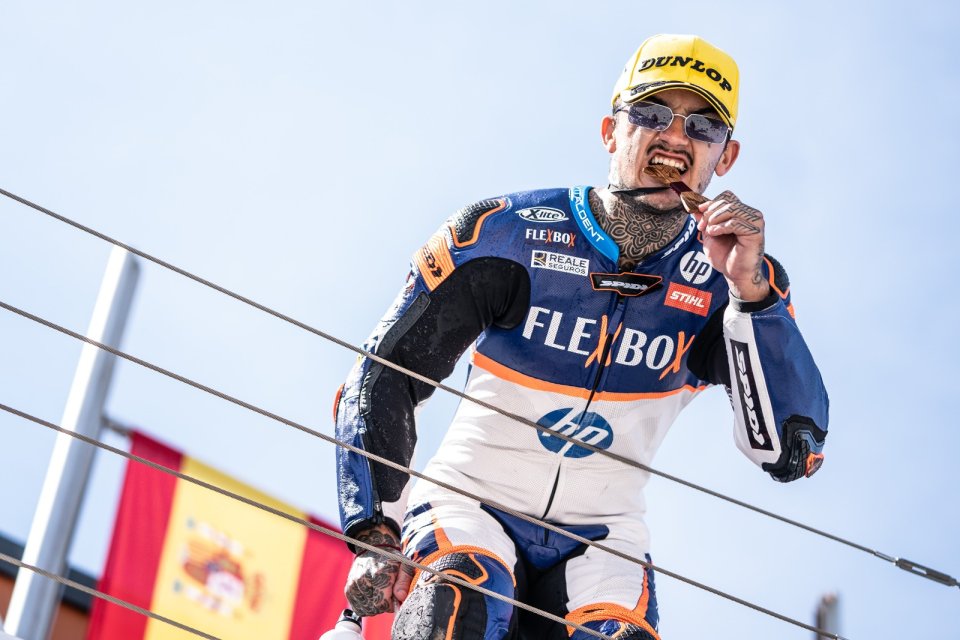 Aaron Canet, even in the past, has on a number of occasions appeared on the podium wearing a bow tie. There are some observers who think it is a sign of a simple carefree spirit, common among riders in celebrations, but the recent controversy that has erupted precisely regarding the numerous tattoos of the Flexbox rider seems to have finally given a clearer interpretation on the matter.

It all started in 2021 on the podium after Mugello.

"It turns out that we were in negotiations with several teams of various categories - Canet told AS - and some rejected me because I wore tattoos and more nonsense. And outside the paddock I have also been crossed out as things without knowing me, because of my image. I can understand that I like reggaeton and another likes hard rock, but that's why I don't treat him worse or I'm going to discriminate against him.".

For the Spaniard, this discrimination didn't go down well at all, so much so that over time it became not only a burden, but perhaps also a cause of bad luck. Hence Aaron's decision to break the silence and clarify his point of view on the matter once and for all.

"The bow tie is a message to some people inside the paddock and outside it who have labelled me this or that thing without knowing me and for having tattoos, in a discriminatory way. You are not a better or worse person for having tattoos. Some saw me as a murderer for having my body tattooed, when in fact I am the same kid as when I was 16 years old and I did not wear them,” continued the Spaniard.

"I think I have shown in this period in the championship that I can get on the podium with or without a bow tie. We have the same gas with or without tattoos and I am the same person and the same elite athlete, the one who gets up in the morning to train at home, in Andorra, and having tattoos does not have to make you a better or worse person, the same as wearing a bow tie.”

Thus having clarified the mystery, it seems that Aaron Canet will do without it in the future and its purpose has now been reached.

"I am the same rider and the same person as always, and I give gas as always, as demonstrated by  seven podiums, three pole positions and several fastest laps. The bow tie was a symbol, let's break it", he concluded.

The story has obviously garnered the opinions of many in the paddock. First of all, amongst the riders, who wanted to express their points of view on the matter, here are some of them.

“For sure, he has a lot of tattoos! – said Quartararo - But I can understand, also, the teams. I know how, for some brands, it is important to have no tattoos. Some do not care. It is sad because he is a really strong rider. Hopefully, if he is ready to move to MotoGP, I hope he finds someone.”

“I think it is strange we have problems like this – added Bagnaia - It doesn’t mean anything if we have a lot of tattoos. For a team to reject you because you have tattoos? It is something I do not understand.”

"I think Aaron is a really strong rider - added Bastianini - I was his teammate in 2017 and despite appearances he is a very good guy. This situation is so strange for him. I hope he has the chance to do something because he has the possibility to arrive in MotoGP ".

"My opinion is clear and it is the one I would recommend to Canet - concluded Marquez - if you win ten races in Moto2, don't worry, there is no bow tie, tattoo or anything else and the teams will want you. When there is a level. .. In the end, everything is respectable and you have to evaluate the character of the person, but this is the sport and what is most appreciated are the results on the track ".