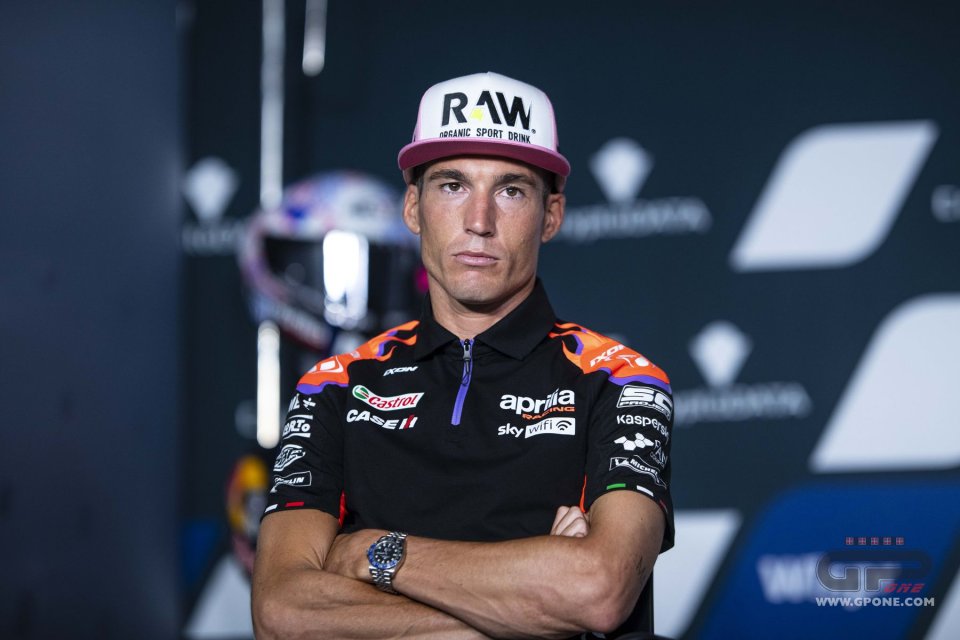 The Motegi race had a very bitter aftertaste for Aleix Espargarò and for Aprilia, out of the fight even before the start due to a technical oversight. The Spanish rider, forced to return to the pits for a bike change before the start, thus saw a rare opportunity disappear to recover points in the standings on a track where his closest rivals immediately appeared to be in difficulty. He did not mince his words about it, knowing that in his despair he has lost an unrepeatable opportunity. 17 points behind Quartararo's Yamaha now become 25, and with only four races left to win the title, now the only option for the Spaniard remains a clear victory or a glaring mistake by the Frenchman.

We saw you come back to the pits and miss the start, what happened?

"I realized that something was wrong in the sighting lap - explains Aleix – the Eco map we call it, to save fuel, the bike doesn’t go more than 100 km/h, no more than 5000 rpm, loaded manually by the technician. So, I tried everything on the sighting lap and it was not working. I changed to the second bike in the pits, but that bike had the soft rear tyre and I can’t ride with that tyre. The technician immediately came to apologize, I hugged him, but this oversight cost us dearly in the championship."

You returned to the race immediately but trying to limit the damage was an impossible task.

“I knew it from the beginning, the bike was just pushing the front. I just tried to stay on track. I was also very nervous and making a lot of mistakes. It’s a big, big mistake and this cannot happen. But we are human. We are a team and we will try to win the title. The whole team has worked hard and will continue to do so until the championship is over, trying to win it. "

If this problem had not arisen, what expectations did you have for this race?

“A win, 100%. It’s the first weekend due to the weather conditions obviously that I didn’t ride bike two at all. The soft tyre I hate it, from the last three races I never used it. Even in the qualifying I suffered. And even like that I was in 1m46.0s for many laps. With the medium tyre on my other bike, I could have stayed in 45.5, at least at level of Jack. So, it’s a shame. Overtaking on this circuit is very difficult, I lost many laps behind Di Giannantonio's Ducati. "

You weren't the only one to have problems today, Pecco crashed on the last lap and Fabio was unable to improve his position. A small victory in amongst all the misfortune?

“This is worse. For me this is worse, because I lost a big opportunity. If they finished first and second, it would have been worse for the championship but I wouldn’t have been that sad. But I’m very sad because I knew today I was faster than them. And it’s very difficult to be faster than Pecco and Fabio, it’s very rare for me. So, it was a big waste. In the next races the only option left is to win, Fabio still has a lot of advantage and there are only four circuits left. They often say that the Aprilia is a bomb, but it's neither the Ducati nor the Yamaha, and after all I'm not Marc Marquez, and being where I am in the standings has really cost me a lot during this season. "

Will racing in Thailand next week help you move on quickly? How will you face the next few days?

"First I will go to the pits to support my team. They need it, it's a team effort and the goal is always the same: trying to win the title, that's what I want. But to be honest, right now I would like to be able to go back to my family, but this is my job, and next week it will be the turn of another race. "

Forward abandons MV Agusta, Cuzari: "it cost too much to just have the...