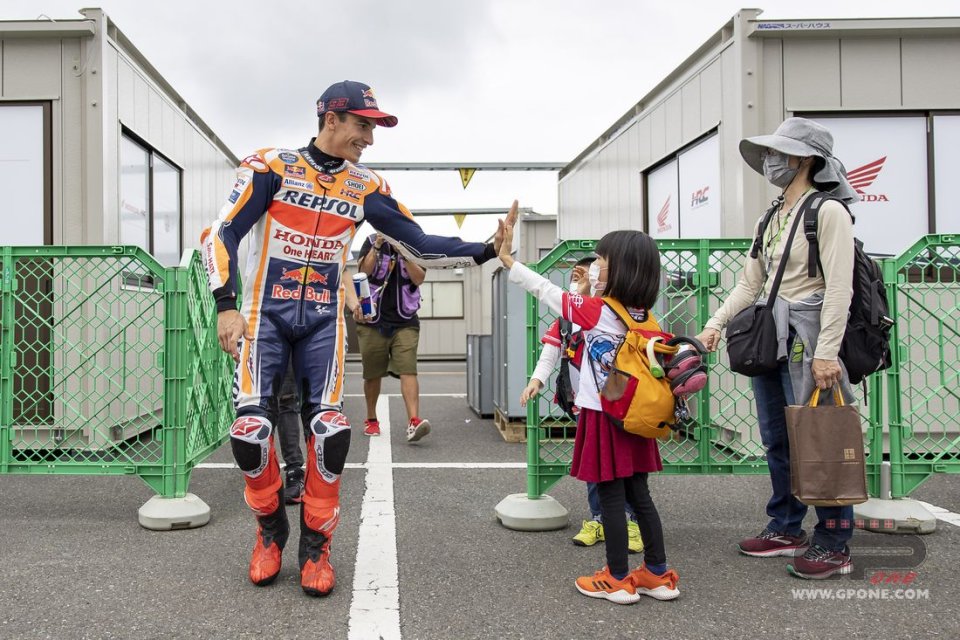 Marquez is still not in perfect shape, he has been away from racing for months, yet he is always there, up among the first. He was also there today at Motegi, 6th quickest time but above all close to the best, just over a tenth and a half behind Miller. A flying lap does not make a summer though, but he’s on the right road.

“I feel quite good - he said at the end of free practice, after putting ice packs on his shoulder and arm – Today the fact it was only one practice at one hour and 15 minutes, and tomorrow it looks like it will rain, I started full attack. Not like crazy, just I didn’t think about my physical condition. I just gave everything that I had and I felt it, because in the last part of the practice I started to feel some pain in some specific points. But we already imagined and already understood before coming here that it would be a very difficult circuit. I have no pain in the bone, but when the muscles lose strength then I have a strange position and I strain the joint ".

"The truth is that I didn't hope to have a time like this and I did it alone - he continued - But I felt good, more than I expected, but today I understood that to make a race full attack and consistent will be very difficult. So maybe for the race distance I will have to drop the pace a little bit to finish in a good way.”

So he doesn't want to set any goals.

“I don't know, everyone in the race is very fast. It will help me that it will rain tomorrow because in the wet it is physically less demanding ” he said.

However it goes, for once he wasn't the only fast Honda rider. Espargarò finished the day 7th, he said he felt super competitive with the soft tyre but he didn't understand why, and even Honda has no idea.

“It’s easy, it’s like always – added Marquez - In the practice, in Misano test, in Mandalika, in Sepang, with full rubber on track, good grip, then the lap time is coming. In the end, the grip was so high. So, as soon as we have high grip the lap time is coming. And especially Pol is struggling a lot with the lack of grip, like in Aragon. The problem with this bike the lap time depends everything on the rear grip because you cannot do anything with the front. You don’t have the feedback, you don’t have the information to push with the front tyre. So, the explanation is this: it’s a longer practice, more rubber in the end, and especially in this race track we don’t use the turning. You don’t carry the speed in the corners, and that’s our weak point this year.”

Three years ago, when they raced for the last time at Motegi, the MotoGP bikes were very different from today and Marc noticed it.

"The circuit seems to have become narrower and shorter - he explained - We use the lowering device 5 times a lap on this track and that’s a lot, we put more and more power on the ground and brake later. Already on the first exit we were close to the best lap in the race in 2019 ".

Marquez continues to use the aluminium swingarm made by Kalex.

“I'm not going to reveal all the details, it's not a question of having more or less grip, but the way it tells you what happens, for example when the rear slides, which is different. In terms of performance it's similar to the old one, but I feel a big difference in what it tells me” were the reasons why he prefers it.

Finally, he answered a question about the friendly relationship between the three title contenders. Quite different from the fights on and off the track that Marc had with Rossi and Lorenzo.

"It reminds me a little of my relationship with Dovizioso, I was fine with him but there was tension - he said - There has never been a fight between them on the last lap and this has an effect. However, the best psychological warfare is what you do on the track, as Doohan said, it really depends on whether you are superior or not. Pecco is very competitive, Quartararo knows that the others are arriving and it will be complicated, Aleix is ​​the only one who has no pressure. "

Marquez riding on instinct on today’s return: "I only had fun at the end...