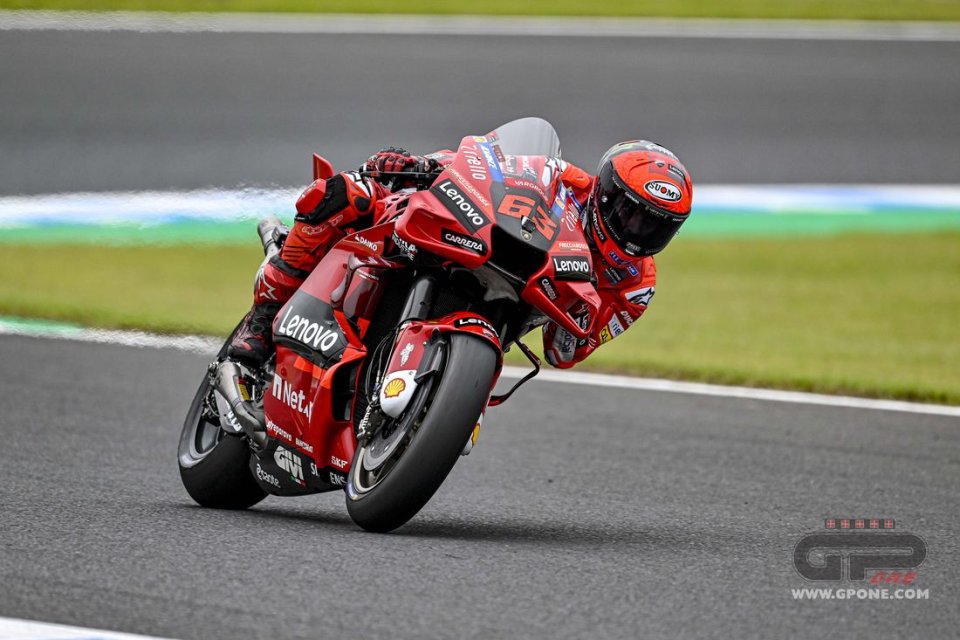 In the first part of the first, single and very long practice session on Friday at Motegi (an hour and a quarter) Bagnaia seemed to be a bit lost. A problem on one bike, the times that did not come: it was easy to get nervous and make things worse. Instead, at the chequered flag, Pecco finished 2nd quickest, just 28 thousandths slower than his team-mate Miller.

“Today was tough - he sighed - At the beginning of the session I had a setback and lost time, then a few drops of rain began to fall, but after that I managed to improve at each exit. In the end I'm happy with the day: once when I started in difficulty it was difficult for me to straighten out the situation, but now we can do it quickly ”.

How come you had those difficulties?

“It was a bit due to the fact that we haven't been to this circuit for two years. It was a bit strange and then I also had to stop for a setback with one of the two bikes, something was missing. I needed time to improve my feelings on the bike and in the last two exits I succeeded, the pace was good too. "

So in the dry, the balance is positive?

"We are almost ready in case we race in the dry, but the most important thing today was to be in the top 10 because it looks like it will rain tomorrow. I think we are at 80% of our potential, but it's hard to say, I need more laps. "

Is this a track that suits the Desmosedici?

“I think it's a good circuit for Ducati because of the braking, but under acceleration it's hard to put all the power on the ground because of the wheelie and this makes things complicated. How can we improve? It is the technicians who are responsible for improving certain aspects, I only report my feelings, but usually I like to have less electronics and control the bike with the gas and the rear brake, in order to have fewer filters ”.

This is the first time you have raced here since the introduction of the lowering devices, how much has the Ducati changed in three years?

"I have already beaten my fastest lap of 2019, but that year I didn't even have a factory bike. It had been a complicated weekend, I struggled, everything is different now, the bike is much more competitive, the step forward compared to the bike I used three years ago is enormous. It is a set of things that helps me and among those there is certainly the rear lowering unit, here it gives a big hand ".

"I don’t know. Today, as far as I'm concerned, if we hadn't been able to solve the problem right away, it would have been complicated. In one session, if it goes wrong, everything can become more problematic ”.