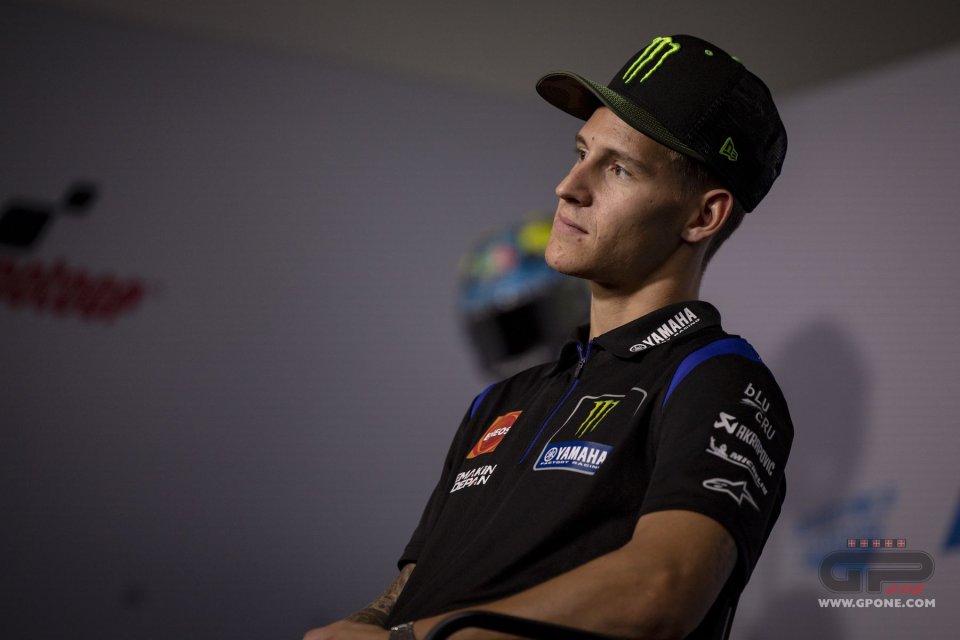 Fabio Quartararo probably still has to fully digest what happened in Aragon. The Frenchman had shown over the weekend that he had the pace to fight for at least a place on the podium, but the race incident that knocked him out of contention after the impact with Marc Marquez caused a very heavy DNF in the world championship standings, opening the way for his two rivals for the title to close the gap to the Frenchman.

Motegi is a track that on paper might be of help for Fabio and his Yamaha, but MotoGP hasn't raced here since 2019 and this season has taught us that now it is really difficult to identify a single track as favourable or otherwise for a bike. It will be a sort of blind date with the track for everyone, but Quartararo will have to tackle it with the pressure of having to manage his slim advantage in the standings over Bagnaia and Espargarò. In addition, Fabio will have to deal with the bad abrasions to the chest that he picked up at Aragon in the crash.

"I feel good, I was able to train - explained the Frenchman - it hurts a little bit, but I think I won't have any problems on the bike. Maybe it will burn a bit at the beginning, but I don't see a big problem to ride the bike" .

Do you think Motegi is a Yamaha track?

"In the end, on every track we are fast. If you check, I was fast at Aragon too, in the past I had never been. This time I had a great pace, too bad the race ended early. About the race pace there is no doubt that we can be fast everywhere, but we also have to realise that we continue to have difficulty overtaking. At Motegi I have always been very fast, so I can't wait to race. "

The grip here has always been good and your M1 usually feels good in this condition. Are you worried about the rain?

"Also in 2019 the grip was very high here. I raced with Marc and Dovi, a good fight. In general, where there is more grip, we feel good, at Mandalika we went very strong in the wet so I don't think I have anything to fear from the rain. I'd have more fun in the dry, but in the end any scenario would be fine. "

How do you plan to manage your championship lead which has now shrunk so much?

"In the end what can you do. We are back to the point where all three are in 17 points and it seems to be back at the beginning of the season, when everyone is pushing hard. Then there is also Enea who is still fighting, but certainly the three of us are separated by these 17 points and this will lead us to push hard and that's something I like. "

What do you think of Bastianini, do you still see him fighting for the world championship?

"As a rider he is super, super strong. As a rival, right now it’s five races to the end and he’s less of a contender compared to us. I think he is 48 points behind, but then if some of us make a mistake then he will not be so far. I don’t think he is more of a contender because he made an amazing race in Aragon. I see him as a rival but of course, a little bit more far than Aleix and Pecco."

Compared to 2019, do you think it will be any different out there on the track?

"I think a lot of things will change. I think it will be difficult to manage the weather, but if it were to remain dry I think we would all be faster on the lap than in 2019. We have all improved, the bikes have improved a lot. I think here the holeshot is a device that can make a difference, at least in the dry ".

For this season finale, do you plan to race in defence or will you keep attacking?

"I always try to race to the maximum, I did it in 2020 and I did it also in 2021, even when I was a lot of points ahead in the standings. I was always trying to fight for the title. This year I have never had a huge advantage in the standings, but I've always given my best in every race and it won't change between now and the end of the year. "

We saw you playing at the Yamaha Music DJ Set, have you already chosen your name as a musician?

"I didn't choose my DJ name! I have to find it, even on the plane I had 12 hours to play with the computer and I enjoyed it. It was nice to visit Yamaha Music, I didn't imagine it to be so big and it was really great" .