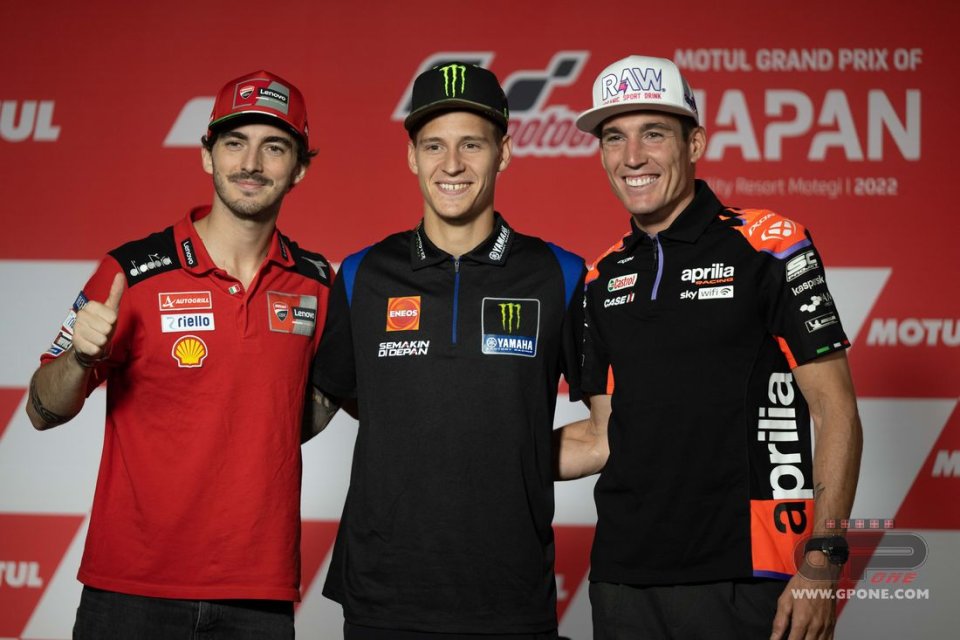 Bagnaia has arrived in Japan relaxed and smiling, but it could not be otherwise, because his comeback on Quartararo is almost complete, with 81 points made up in just 5 races. Furthermore, Motegi, with its braking and acceleration from low speeds, seems to be made especially for Ducati.

After Aragon, the discussions about team orders have not died down, even if Bastianini, with his victory proved that there were none in Spain.

It's not a topic that Pecco really likes to talk about: "Sincerely, I don't think that I need help to be in front - he underlined – I prefer to win on track and not because someone let me past. But in any case, I'm not inside of this decision. So, I will be racing, I will try to be in front and I will try to win. This will be my main goal, like I did in Misano and in Aragon."

Also because mathematically Enea is still fighting for the championship and Bagnaia has not completely eliminated him from the list of title contenders.

"Bastianini is one of the most talented riders and will certainly try to finish in the top 3 in the championship - explained the Italian - Right now, 48 points behind, he has a little less chance of winning the title, but as I recovered many points, he too can do it ”.

Whichever way it goes, the Ducati man at this moment wants to focus on the present and not on a future that still remains to be written.

“At the moment I'm not thinking too much about the championship, there are 5 races left: there are still many and everything can change - he continued - I want to do my job as usual. I know that in the wet I'm not the fastest, in Indonesia I finished the race 15th, if the race is wet it would be better to have those conditions in as many free practice sessions as possible ”.

If it were to be sunny, the Desmosedici could once again be the bike to beat.

"I’m very happy to be here because it’s one of my favourite places to come. It means the start of the flyaways and it’s one of my favourite layouts - said Bagnaia – For sure, the situation is totally different compared to 2019 when I was a rookie and was struggling with my bike. I think this year can be good. I think it suits our bike very well and I really like braking so I think we can be competitive. Normally we are the bike to beat because our bike is the most complete at this moment. We have also seen in Austria that our bike is normally the fastest but Fabio was able to be faster than us. It will be very important to make the right decision regarding the feeling and we have to also consider the conditions."

The last question to which he replied was purely technical: how much will the lowering device affect in Motegi?

"Actually Ducati already had it in 2019, but only on Miller's bike - he recalled - In these types of track it makes a big difference, perhaps even more so here, but sometimes it can create some problems under braking."