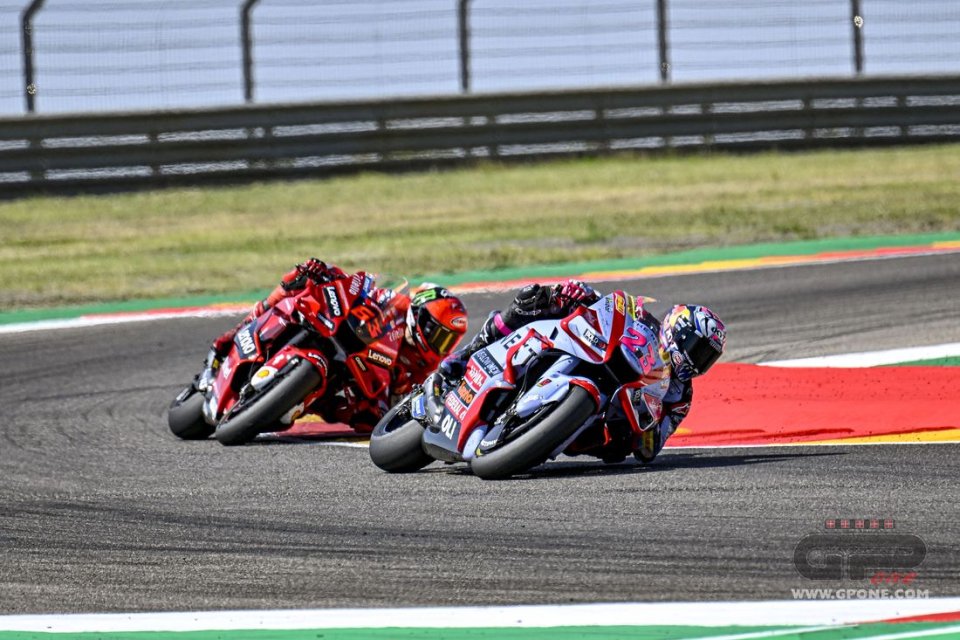 At Misano Bastianini was unable to overtake Bagnaia. "The days after the GP were hell" confessed Pecco at Aragon, while Enea blurted out "not again with this story?" to the umpteenth question on team orders. After the race at MotorLand, on the faces of both of them, there was only one of liberation, as if to say: “Did you see that we were sincere? There are no team orders ”.

Everyone happy? Not by a long chalk, because now the discussion has been reversed, passing from “at Misano they stopped Bastianini” to “at Aragon they should have stopped Bastianini”. After all, everyone has their own opinion and in this case there is no right answer. Or rather there is, but it depends on which side you look at what happened.

Clearly, both the General Manager of the Rossa Gigi Dall’Igna and the Sporting Director Paolo Ciabatti declared that they would have been happier if Bagnaia had won, for the simple reason that he would now have 5 points more in the standings. If they hadn't said it, they would have turned out to be as fake as a 3 euro coin.

Now that we are sure that orders were not given at Aragon (other than not to risk bringing each other down in a possible battle), we can understand if the choice was more or less right. Did Bastianini make an over-the-limit attack on Pecco? No. Is Bastianini still mathematically in the race for the championship? Yes. These two answers should be enough to certify that Enea’s victory was still entirely legitimate.

Were it not for the fact that Ducati is suffering a long fasting, 15 years after that world title that lit up Borgo Panigale thanks to Casey Stoner. In other words, throwing away an opportunity in the name of sportsmanship at all costs may seem like suicide, even in the face of the investments that the Borgo Panigale manufacturer has made and is making. Also because Enea is in the race for the World Championship, but his chances of taking it home are scarce. Not so much for the 48 points that separate him from Quartararo (Pecco has recovered 81 in just 5 GPs), but because he is 4th in the standings. It is one thing to get back on just one rider hoping for bad luck or bad days, another on 3. The twists and turns in MotoGP are not lacking, but it goes without saying that the climb is really unlikely. Not to mention that his place in the official team for next year has already been secured.

So what if those 5 points at Valencia made the difference between victory and defeat? Would hiding behind the wall of sportsmanship be enough for Ducati? Surely not. If we were in a sport with two more wheels, these talks probably wouldn't even be happening. In Formula 1, but not only, there are team orders and when they are not respected all hell breaks loose.

No one doubts that Bagnaia is perfectly capable of winning this title relying only on his strength (“I don't want squires” he has repeated almost ad nauseum), but here his friends could be more dangerous than enemies. After all, it is not Ducati's fault that it has made the best bike of the grid and has many very strong riders, as opposed to a Yamaha that only Quartararo can ride and an Aprilia that can count on Vinales in flashes.

If Pecco doesn’t win the title, it won’t in any case have been Enea who made him lose it. The technical choices at the beginning of the championship and a few too many mistakes (Le Mans and Sachsenring above all) weigh on his classification. Those races weigh more than any overtaking moves.

If he raises the trophy at Valencia, everything will be forgotten. Otherwise, the controversy will ignite the spirits. In MotoGP there is not only black and white, the shades of grey are more than 50. In the hope that red will sort everything out.