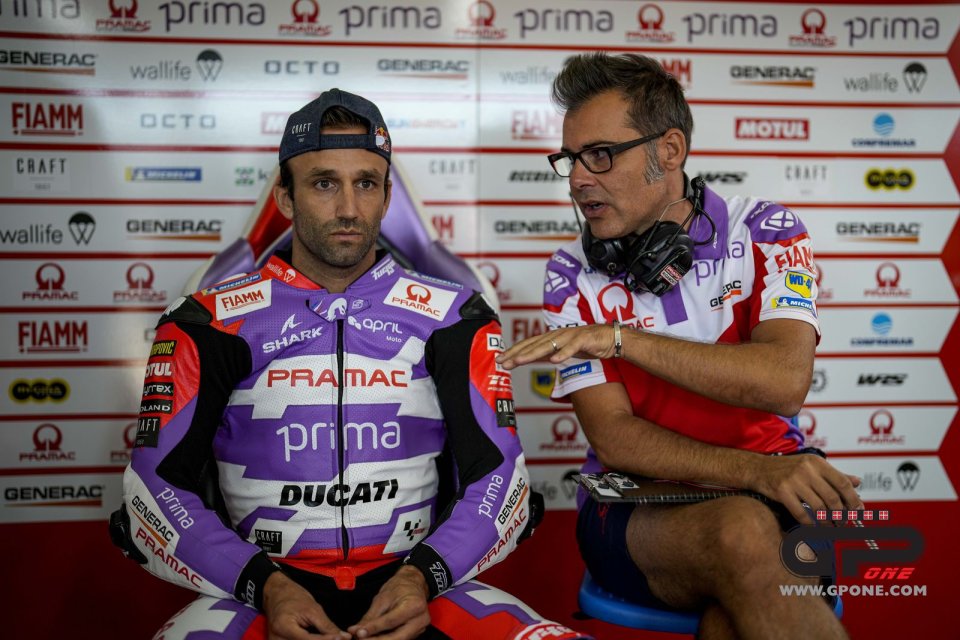 Zarco has no doubt. His privileged view of the accident between Marquez and Quartararo makes him affirm that Marc had a decidedly over-the-top attitude. According to him, the cause of the accident was the Spanish rider’s reckless behavior. He first went very wide, obstructing Fabio and causing the accident. He then didn’t realize the problems caused by the collision, and hit the innocent Nakagami straight on.

Overall, Johann had a mediocre race: from a 5th position, he ended in 8th at the finish line. In short, we’ll have to wait at least until the next Grand Prix to get to see his famous back flip again. According to the Pramac rider, his pace was better than those ahead of him but, a bit like the other French rider, he has unusual trajectories that make it difficult for him to gain positions in the race.

“An eighth position for me isn’t the best. But, compared to how it went in Misano, it went better all weekend. I didn’t have a pace for the podium. I struggle to fight in the group, because I have different trajectories compared to the others. This is a problem I’ve always had. Overtaking is difficult for me. I had the same pace as Miller, but I struggled to overtake Jorge, who defended his trajectory well, and we lost contact with those ahead. I had a bit more to make a difference in the race, but that’s how it went.”

Is it a riding style issue?
“I don’t want to go into detail. I’m just saying that we’ll have to work to get a better feeling and be faster.”

During the first accident, you were back there. Can you tell us how it went?
“I was feeling good. I was strong in braking, but I preferred not to exaggerate. At turn three, Marc went all the way to the right to prepare for the left turn. The accident was really bad, and I had to slow down to avoid Fabio. I immediately saw pieces of the fairing of Fabio’s bike stuck in Marc’s bike, and that’s why I lost the rear at five and Martin passed me there. I saw the accident Nakagami was involved in. He too risked being run over by a few riders. Marquez went a little too far. I really like his style. He’s one of the fastest, and I told him that on Thursday. But maneuvers like that in the race, especially since it happened to him after coming into contact with Fabio, are perhaps exaggerated. It was a crazy first lap.”

Marc said that the problem was caused by a piece of fairing that interfered with the lowering device and blocked the rear wheel, pushing him against Nakagami. Is it a problem related to  all these wings and devices?
“It’s a way of finding an excuse for the accident, so he doesn’t get blamed for it. Surely, the fairing was involved, however, I saw him in the corner when he lost the rear, but he continued to insist on the way he was riding, increasing the risk.”

He said that, at Turn 5, he didn’t hear anything strange until 7.
“That’s probably where the lowering the device gave him problems. It’s his word against mine. Maybe because he’s stronger than I am, his word is worth more.”

“I was leaning too much. It happens when you push on a MotoGP. I have injuries all over my body. I’ll have to wait and understand my condition. It’s...
2 hours 5 min ago

The calendar for next year has been set and will be made public today. After Kazakhstan, another country enters the World Championship.
8 hours 56 min ago

Pecco will have to watch out for teammate Jack Miller triumphant in Motegi and eager to score another success, the fourth in his career in the...
1 day 3 hours ago

2023 marks the start of a new five-year, Kazakhstan will also become the 30th country to host a motorcycle Grand Prix since 1949
3 days 8 hours ago