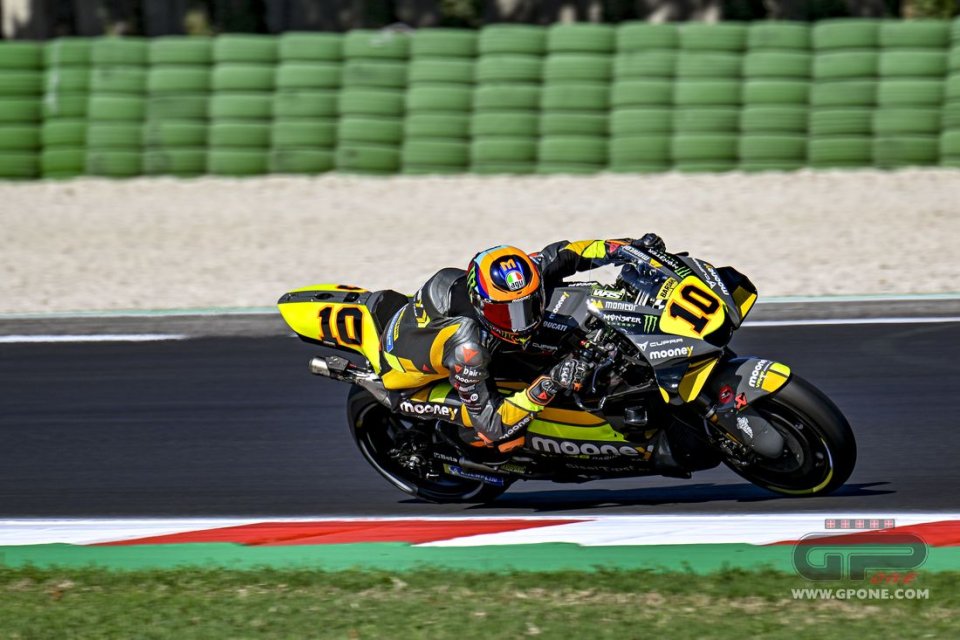 Stealthily – while everyone was busy watching Bagnaia and Bastianini and the accidents involving Marquez and Quartararo and then Nakagami – Marini made a nice comeback, gaining seven positions compared to where he started off in the race.

The Mooney team rider is constantly improving and, thanks to a Ducati that is proving to be really on point, Marini is expressing a very high potential, so much so that he finished in 7th, in top ten again.

“I’m really happy with this race, especially since I started in fourteenth. It was difficult to think that I’d be in seventh. My pace was amazing for me too. I did the fast lap, which is also the record in the race. I didn’t expect it, because Aragon is not a track I feel great on, but we found something good this morning, so I have to thank David and the Ohlins guys and the electronics analysts. We worked and made a great effort to achieve this result. The conditions of the track were horrible, very difficult. I also saw other riders struggle a lot but, fortunately, we managed to be fast until the end, with excellent tire management.”

You were very close to Nakagami on the first lap.
“Yeah, I was right next to him. Fortunately, I reacted well and was able to avoid him without losing too much time. It was a scary moment. I thought I was going to run over his head or his body and, in turn, also fall.”

Next year, you’ll be on the same bike and, given your improvements, you can start the season off really well.
“I think so. I hope Ducati doesn’t make the same mistakes this year and that the new bike is perfect from the start. In any case, I know that I’ll have a great potential to fight for the podium and improve every GP. We’ll see how the others behave, too. I’m sure other constructors and other riders will emerge next year. This year, Suzuki is on its way out, and Honda is struggling.”

What was the change you made that you talked about?
“I don’t know. David didn’t tell me anything, just to ride and give him feedback.”

What did you feel?
“I managed to handle the rear tire well without losing anything in braking. I was the strongest of the Ducatis at this stage. Passing Zarco helped me a lot. I could have passed Martin, but the race is over. It’s difficult to overtake other Ducatis, because the bike is fantastic. The braking power is absurd and, if you brake five meters later, you risk going long. Overtaking other bikes is easier.”

What’s your opinion on the championship, three riders in 17 points?
“The championship is doing really well. There's a clear favorite, one hundred percent, and I hope he wins.”

Do you see Enea out of the game?
“I’d like to think no one’s out. The level is so high and balanced that you never know. Quartararo didn’t start well. He was involved in a accident and fell. Enea has to believe in it. They deserve to be there. They’re the strongest four, with the best package. The one who’s in a better situation out of all of them will win.”

Rea: “The falls could’ve been avoided by preparing the track better”