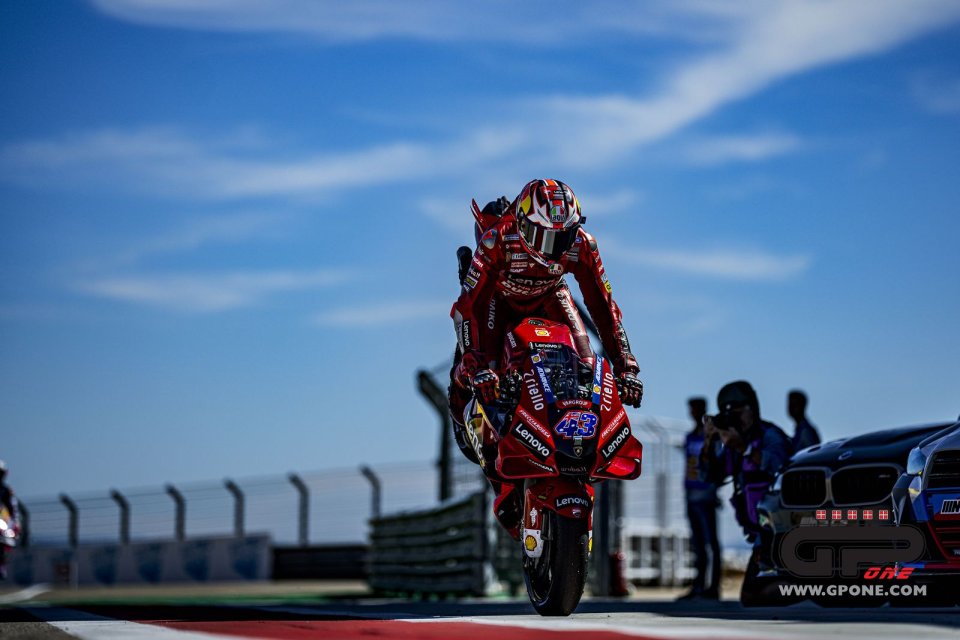 The Borgo Panigale constructor strikes again, as was expected, Fabio feared this and played in defense, while the Ducatis occupied the entire first row of the line-up. Pecco set a new record, followed by a marginal gap from his garage buddy. Jack Miller brought his expertise to the fore, along with the most competitive bike on the line-up, creating a winning alchemy. But the desire to erase a recent bad memory, Misano, may have also played a key role in this result, and one wonders if the exploits of the Australian rider in this second phase of the championship aren’t giving the Ducatis second thoughts, since they’ll have the experience of  “Thriller Miller” at the service of their opponents in the KTM ...

You’ve come very close to what Pecco called his best qualification ever. It’s your fourth straight start from the front row.
“I’m very satisfied with today’s result,” the Australian rider explained. “Things yesterday didn’t go in the right direction, but we analyzed the errors to understand what to improve. Starting this morning, from the FP3, the pace improved. I felt more comfortable on the bike. When I saw that I hit the second best time behind Pecco, I was surprised. Surprised because I had already surprised myself with my best lap, improving the third sector by six tenths, compared to my best result, and someone managed to do even better. They were all very fast today, especially on the first tire, which wears out very quickly here in Aragon.”

This is the 12th pole for a Ducati in the last three races. What does it feel like to ride with this confidence given by such a competitive bike this year?
“I think the results are coming naturally, especially in this second stage of the championship. Even Enea is getting good times with the 2021 bike, and he’s been in the MotoGP for less time than I have. Surely, the bike is very competitive, and all the Ducati riders are among the best and are riding really well. I think it’s a combination of factors. The fact that this happens on circuits that are very different from each other only underlines how much Ducati has improved this year.”

Will this first row be the chance to recuperate after the unfortunate fall in Misano? What can we expect tomorrow?
“My first goal will definitely be to go beyond the second lap this time!” the Australian rider replies with the sarcasm that distinguishes him. “I worked a lot on the race pace in the FP4. Some riders have a slightly better pace but, generally, I have the ability to always bring out something more in the race. So, I have good expectations for tomorrow.”

The Ducati has undoubtedly improved compared to last year. Pecco has even improved his previous record. What made the difference?
“The fairing has greatly improved when entering corners. It’s always been fast on straights, but riding the bike now with an open throttle is much easier than before.”

The introduction of sprint races in 2023 will reduce the time allowed for riders in the pre-race warm-up. Do you think that’ll make a big difference? Will we see a change of strategy?
“I think having the opportunity to do some laps is important for a rider. You have the chance to concentrate and distance yourself, understand the trajectories, but you do the bulk of the prep work during the previous days, so I don’t think we’ll have major problems next year.”

Jack Miller: "nice to enjoy a lap of Phillip island by going slow!"