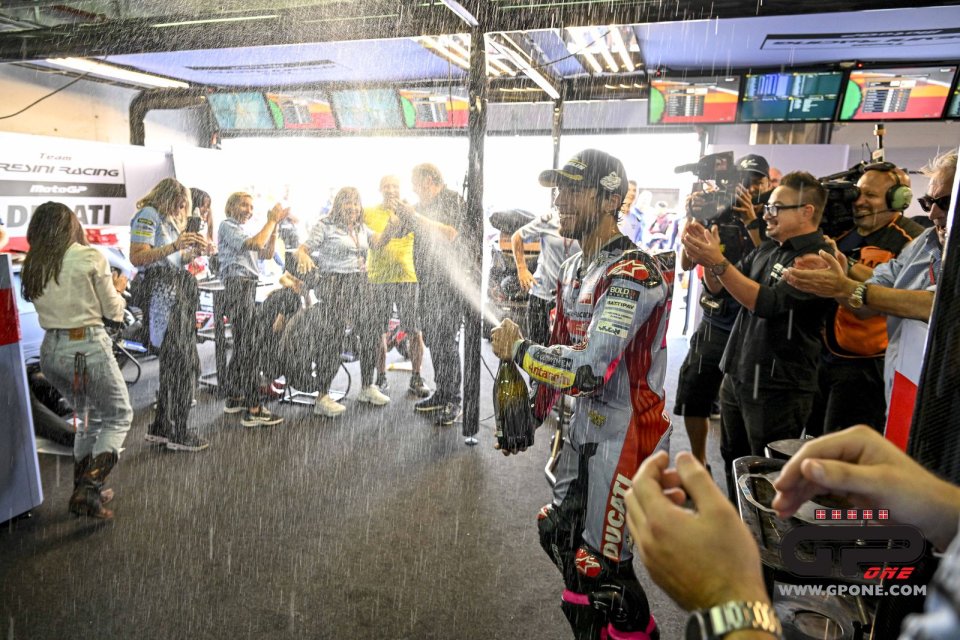 Aragon is tinged with the red of Ducati, which takes home the constructors' title, as well as the red of Bagnaia, who thanks to the crash of his closest rival made up more points and who is now at -10 from the Yamaha at the top of the standings. But Aragon also and above all was all about Enea, the Gresini team rider, who had said: "If I had to duel with Pecco I would try again", and the ‘beast’ was true to his word. In the first laps he moved into the leading group, then the first pass on Pecco, thwarted by an error shortly after at turn 10. However, it took him very little time to recover, his pace was among the fastest all weekend. The Beast chased Pecco's Ducati, looking for an opening or a mistake, which Pecco did not allow him, so he finally made the winning move at turn 7 on the last lap. Enea thus took his fourth championship win this year. A victory but also a revenge, moral of course, on his future teammate. These two riders will clearly write the future of Ducati.

We saw a rematch of Misano, the race started well, then that mistake in turn 10. At what point did you realize you could fight for the victory?

"It was a good battle with Pecco, like in Misano - Enea told us - at the beginning of the race I didn't start very well, Aleix overtook me and I lost some positions. On lap nine I took the lead again, passing the Ducati of Pecco, then that mistake at turn 10 ruined the efforts made until then. At that point I realized I had to regain concentration and continue the race. Pecco had an excellent race pace and was riding with perfect lines, like a Misano. It wasn't easy, but on the last lap I managed to slot in and win the race. It's a great feeling to be back on the top step of the podium. "

Did you plan that pass at turn 7 or did you act on instinct?

"I didn't plan it, while I was chasing Pecco's Ducati at turn 5 I got very close to him. There I realized that maybe I would have a margin for overtaking. That is a sector in which I had an advantage and I was able to exploit it. But it was a clean pass, we were both very careful not to make mistakes. "

How much di tyre management influence this result?

"I think it was one of the key aspects, I knew it would not be easy to manage the race, and there were many chances of making mistakes. During the race I had a lot of 'front lock', but I was careful not to get too close to the riders in front of me in the early laps so as not to over-stress the front ".

This result also silences the rumours about team orders in the last race at Misano. Yesterday you said that if you had a chance for a rematch you wouldn't have let it pass by, and you did.

"Yes, at Misano I made a mistake at turn 4. Here I gave my all and this time I managed to overtake Pecco on the last lap. I hope I have dispelled any doubts now!", he joked.

It seems that you and Pecco are riding on a different level from the others. What sets you apart from the rest of the grid?

"Pecco, like all the Ducati riders, is really fast. Obviously the bike counts but since the setups are very similar it is not easy to overtake a Ducati on a Ducati."

This was the second duel on the last lap between you and Pecco. Each of you found a tenth of an advantage, one of you in one sector, the other in another. Looking at the telemetry, what makes you different?

"Our bikes are very similar, so I think the riding styles make the big difference. Cornering is one of my strengths, but Pecco has better cornering speed. We both brake very hard and the circuit also had many difficult points in which lines could have been mistaken, so keeping concentration high was fundamental ".

Does Fabio's crash in the very early stages of the race, and your victory here in Aragon, somehow reopen your hopes of winning the title? With five races remaining, you are fourth 48 points behind Quartararo's Yamaha.

"I knew about his crash at the end of the race. I want to be realistic and not let it go to my head, making up 48 points at this point in the championship is not an easy feat. I prefer to tackle the last few races one by one, obviously trying to keep giving my best and picking up the best possible results ".

Yet your pace in the last few races is among the best, the title is not so elusive.

"So far the bike setup has been very competitive so I have good expectations for my future. But right now I don't feel the pressure of the title race, there is still little hope at the moment. There is however the top 3, which wouldn't be a bad result anyway, but we'll see race by race. The most important thing now will be to do a good qualifying, it all depends on that. "

The championship is coming to an end, and the points at stake are becoming more important. If the possibility of influencing the points of your future teammate still arises, will you think about it? If it’s not you, who do you see as a favourite for the title?

"As far as I'm concerned, I'll only think about doing my races, giving my best as always. It goes without saying that I'll try not to take any risks. As for the title, Pecco seems in excellent form, but Fabio, even if he won't arrive at Motegi in the best of moods, he is doing something incredible with his Yamaha. Aleix, on the other hand, is a question mark, he is less visible and yet he is always consistent in his results ".

It is also time to take stock of this championship. This is your fourth win this year, which one do you think is the best? Do you have any regrets?

"To be honest I still prefer the victories in Austin and Qatar, they were the first and the most difficult, but I have no big regrets, with the team, especially after the summer break, we made a big step forward and we are working really well" .

Today Ducati, thanks also to you, got its hands on the constructors' title.

"I certainly think they are satisfied with our results. Dall'Igna came to congratulate me but there was no way to speak at that moment."