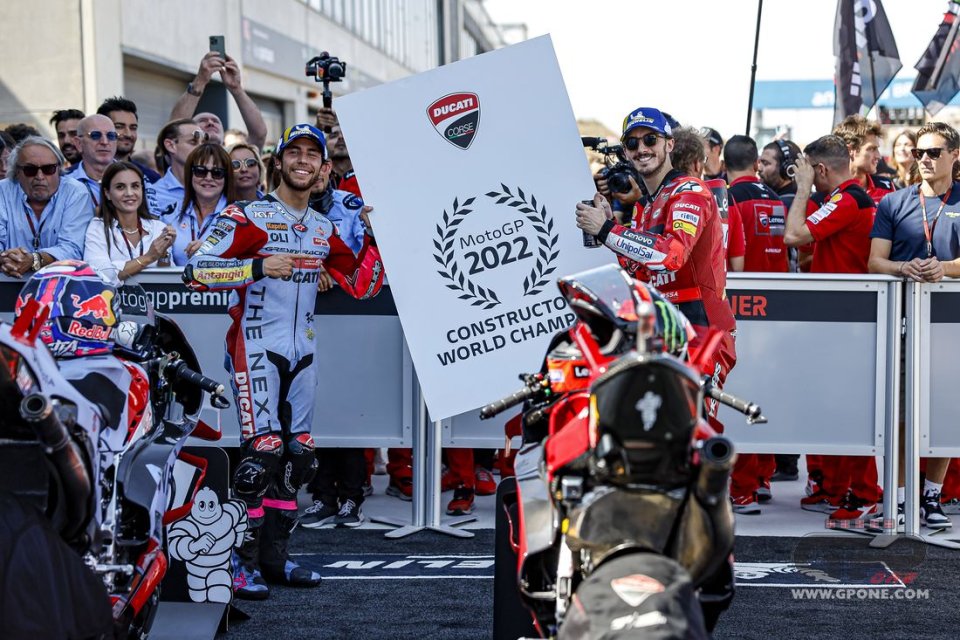 This time Bagnaia might have lost, but he’s smiling. The sprint finish saw Bastianini take the win, exactly the opposite of what happened two weeks ago in Misano, but Pecco has other reasons to be happy. Now the points gap to Quartararo is 10, everything is open with still 5 races to run, but this is not the only positive aspect.

After the finish in Aragon, you gave Bastianini a hug. Has the controversy over teamwork finally died down?

"I really hope so. After Misano it was hell, they said it wasn't fair, that Bastianini would have won easily, that he could lap a second faster a lap… all bullshit. There have never been team orders, but respect has always and only been asked of us, like today. Enea won by playing his cards and I have nothing to say. It’s good the way it is just as it will be good to fight in the next races as well. Even if I prefer to win! ”.

Paradoxically, was it better for him to win to stop all those allegations?

“No, I wanted to win! (laughs) For sure people will understand that certain ideas that one has from home, even from those who were once in the paddock, have always been wrong. I have no squires now and that is right because I was the first to ask for that. Today it was a motivation to have Enea so close, we gave 6 seconds to third, we really made a difference”.

Ironically, isn't it that now someone is going to complain because Ducati doesn’t give any team orders?

“In the end we hear so much useless talk. We all try to do our best, we beat records, we go fast, but we get called washouts. In the end I am in front, I am working in the best possible way”.

Does that bother you?

"Yesterday I was told that I’m oversensitive, it's a bit true, so from now on I will live through this more serenely".

Don't you mind having had your winning streak broken?

"Obviously, it’s a pain in the ass, but when you have given your best, you know it. Today I maybe could have managed the last lap better, but it was easier to crash than to win. My strategy, in case he overtook me, was to take advantage of any mistake he made, but he didn't make any”.

Looking back on that last lap, did you expect Bastianini to try?

“It was a few laps that I felt him close to me, I knew it and I was ready. I just thought about staying calm, because Fabio was unlucky and he gave me a great opportunity to gain points. I didn't do that corner in which he passed me very well, I went wide a bit too much, but today he and I maintained an incredible level. Enea was very good, more than me, so there is nothing to say. Anyway, I'm happy with my result”.

What does the rivalry with him give you?

"In Ducati we are 8 riders who push each other to raise our level, we grow together. Enea is as motivated as I am to win, we know that when one is fast then the other can be too. We must use this push positively ”.

In the past, you used to make mistakes when you were under pressure.

“I’ve changed my mentality, now I no longer think about who is behind me but about myself. I focus on doing everything perfectly. "

Did you immediately realize that Quartararo was out of the race?

“When I exited from Turn 7 I looked to the big screen and I see he crashed and then they communicated it to me on the pit board. Sincerely, it didn’t change my strategy, I tried to do what I set out to do. I did the whole race up front and we won the constructors' title, it's incredible to have done it with 5 races to spare, even if there are 8 of us (laughs). It's always nice ”.

Did you see the accident between him and Marquez?

“I think Fabio wanted to make up positions quickly, Marc had a little slide at the rear and Quartararo was really close: it was a really bad bump. The problem was when I went back to that point on lap 2, there were pieces all over the place, I would have preferred they had displayed the red flag. I don't agree with that decision very much because you didn't know where to put your wheels, it was dangerous”.

Now you can no longer say you are not thinking about the World Championship ...

“For sure now it’s clearer that we are close. 10 points is the lowest distance I ever had from the start of a season. So, for sure I will try to think about the championship, but not so much. I will think just about my work, I know that in Japan it will not be easy. We will have less time to test our bike, to improve our bike, and we know we need more time to be prepared compared to other bikes. But I’m quite sure we can be very competitive and I will try to work like we are doing and finishes the races how we already know.”

Is there one more important than the others in the upcoming races?

“Right now they all are. Perhaps Thailand, where Ducati has struggled in recent years, a little more, as in Malaysia. We'll see, we manage to go be strong even on unfavourable tracks, the important thing will be not to throw anything away ".

In your opinion, who is the favourite for the title?

“Enea said it’s me? So I’ll say it's Enea. Apart from everything, Fabio is still first in the championship, I have made up a lot of points, but at the moment there is not one real favourite. "