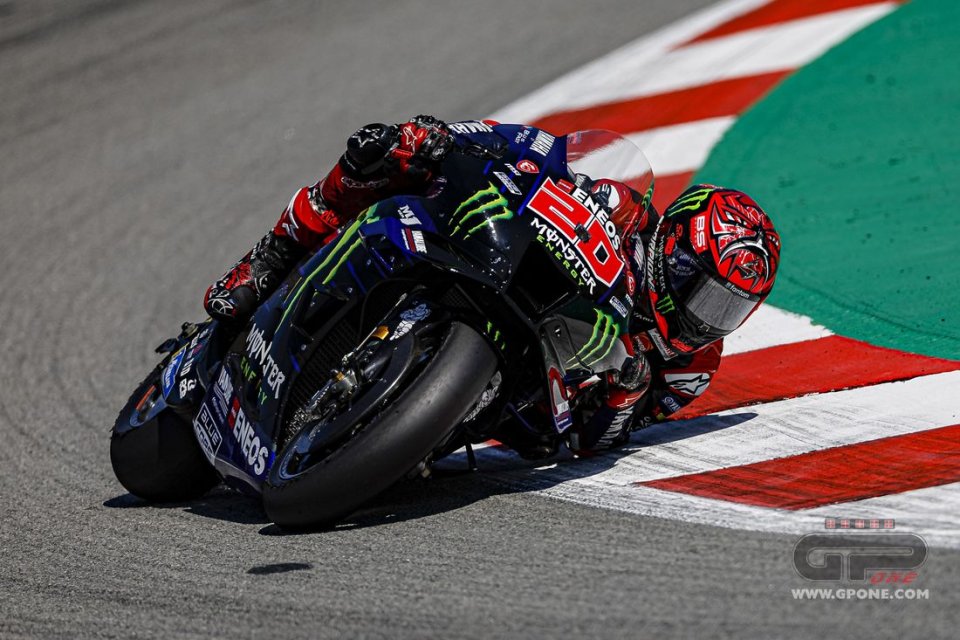 At Aragon Quartararo has always struggled to emerge, and this year too, his performance is certainly nothing to write home about, the Frenchman actually losing much of his potential in the fourth sector. Throughout the day we saw him lap with a series of red helmets in the first three sectors, only to lose all his advantage in T4.

In Q1 the Yamaha rider almost missed out on the second row as well, making a mistake in one of the last laps that would have meant that he started in 9th position. Luckily for him Fabio managed to put together a good lap, which allowed him to start 6th, even if the gap from Bagnaia is close to 8 tenths.

It’ll be another difficult GP, therefore, for Quartararo, who has struggled since qualifying, which was once his and his Yamaha’s strong point. With four Ducatis in front and two behind him, the start will be, together with T4, a crucial phase of his race.

Any ideas about T4 for tomorrow?

"There is nothing legal I can do - joked the rider - we have analyzed the videos and we don’t lose it during the curve. I don't know where those 4 tenths are, only that in 23 laps they become a lot ”.

Is there any chance of changing anything for the race?

“No, I don't think so, but I gave my maximum. The only mistake – and I think maybe I would have improved my lap time, but not the position – is I lose the front in Turn 2, quite straight, I don’t know why. And then I made my lap time in the second lap. But it wouldn’t be a massive change, I wouldn’t have gained half a second.”

The plan is always the same, a perfect start and first lap. And then?

“It’s a shame because I feel so good, I feel we have the pace to fight for the victory but it’s exactly the same since the beginning of the year. I can have three tenths faster than the others, but in the race I will be behind. Qualifying is super important, but P6 was the maximum, maximum, maximum. But I think we can still do something great tomorrow.”

How did it go with the new frame you tried today?

"It seems to be going better, it still takes a while to be sure but we will use it in this race."

Now that you've used it for a few days, can you feel any big differences?

"Not much. It is difficult to say that maybe it turns better in slow corners, also because there are few of them here. In turn 7 I feel it gives us a hand but at Misano it seemed to work better, there are a lot of 'small' corners. There you could see the benefits more ".

You must be happy with your riding, you are pushing hard while making very few mistakes. It's a good confidence boost.

“When you do this the first time it’s good. But then arrives one moment when you look at the first run, you have a red helmet in the last sector and you cross the line and you are P6 at four tenths. In the end you can be proud, but there are many bad words in my head burning. In the end I’m starting to get used to it and we know, if you want to overcome the problem, we know where we lose the four tenths.”

Is there a plan to prevent the tyre pressure from rising?

“The plan is, as we don’t start from the pole position, I think we will start lower in pressure because we will be behind many bikes. The pressure will go up, so this is a problem because I will need to push so much on the braking. So, let’s see if the pressure will go too high. This will be the biggest thing for me tomorrow, the front pressure.”

At Misano you said you couldn't overtake, how is the situation here, does cornering speed help you?

“Unfortunately, no. But I will need to make aggressive overtakes. And if we need to make contact, we will. But it will be my only solution for this race.”

We talked to Enea and told him to try and win.

“Enea is in a different situation: he is very strong on this track, he is fast. I think he will play with Pecco and I think I can stay with them throughout the race “.

"Yes, I was careful in qualifying and in any case risked losing the front. Tomorrow we will have to be very careful there, even if on the first lap some risks are inevitable, I will have to warm up the tyres well, we will see what the track will be like in the warm up ”.