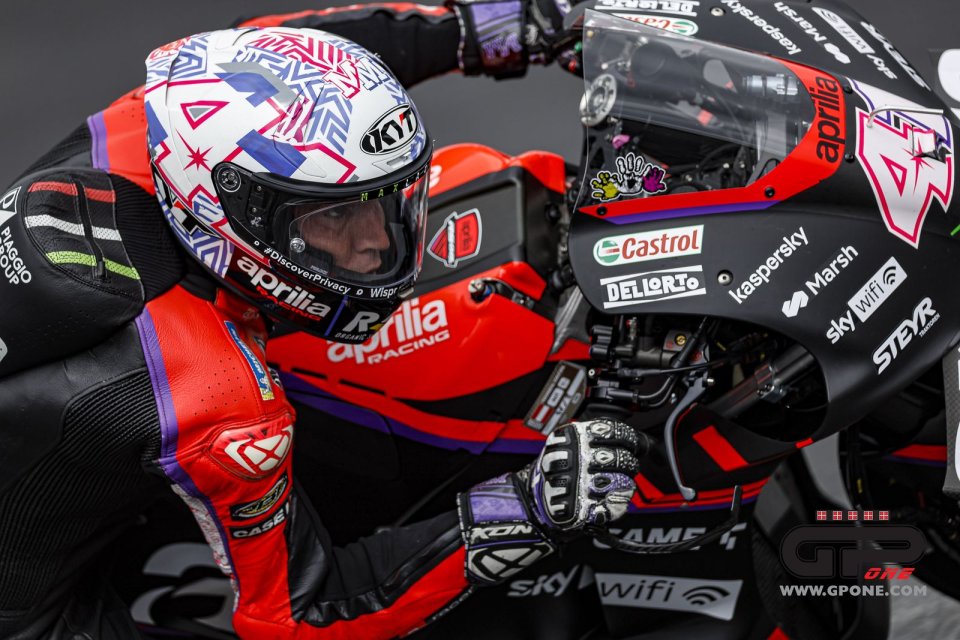 Aleix Espargaro will start from the second row in his home Grand Prix at Aragon. The Aprilia man had to get through Q1 after yesterday’s crash that made him lose confidence on the bike. But Aleix has always liked MotorLand and he managed to take advantage of the speed he found this year to start in 4th position.

The Spaniard openly said that here the Ducatis have something extra and that the Aprilia too is suffering from their engine power. A weekend that started in an adverse way, but improved for the elder Espargarò, who has no doubts here.

“It was a very tense day. The truth is that after yesterday's crash I struggled to regain confidence, even though I knew I was fast. In FP4 I found some confidence and in Q1 I put together a good lap. I knew that either I would qualify well or it would be very difficult tomorrow with the Ducatis. I am satisfied with 4th place also because the Ducatis are on another planet and give us 10 km/h on the straight. It's a track where I was aiming for pole, but Ducati’s level is exaggerated. We go slightly over 340 per hour and they reach 350. Plus I had 2 crashes yesterday and today I had to work hard to find good feelings, so I'm very happy. "

What happened in Q1?

“When I went out on the track I tried to stay out of the ideal line. I realized I was bothering Diggià, even though he was out of the line. As soon as I realised it, I moved. They called me back to the garage and I had to wait until the end to do a clean lap ”.

Are you going to do accountant's race tomorrow?

"Fabio can do an accountant’s race, not me." Aleix joked ”I have to try to recover also because the Ducatis are very fast here, I have a good pace and MotoGP races are unpredictable. Anything can happen ”.

Can you aim for victory or are the Ducatis too far away?

“My pace is not bad, but tyre wear is important here, they have a lot of top speed and can afford to be gentler under acceleration, which we can't do. We have to use our heads and preserve the tyres”.

Fabio said that here he can overtake in turn 5. Do you have other points where you can do it?

“Yes, I think there are, my bike is very stable under braking and I am braking well. This morning I suffered a lot because I couldn't ride with the hard tyre in the cold, but I think the traction on the exit is more worrying. We are also in good shape for speed and I am not worried, there will be problems in terms of traction for which we will have a hard time resisting the Ducati on speed ”.