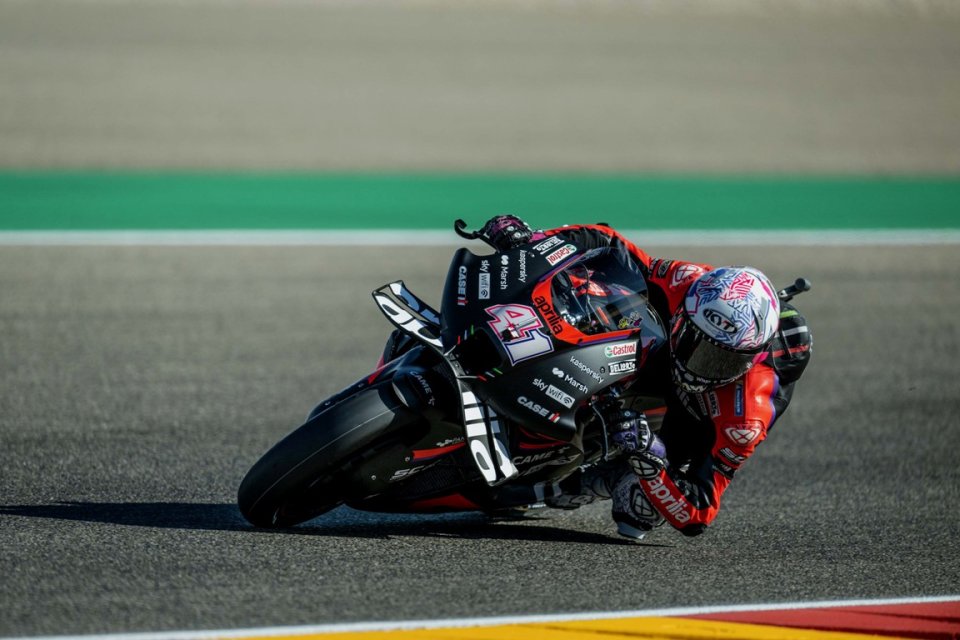 Aleix Espargarò’s Friday ended with two falls and a 13th place, half a second from the top. The glass is, however, half full for the Aprilia rider, especially because of his sensations on the RS-GP on a track which isn't that easy to tackle.

Aleix is aware that he can aim for a more important result after the difficulties he faced in Austria and Misano.

“It was a positive Friday,” he said. “Unfortunately, I made two mistakes. The first was really big, since I was off the trajectory. The second, I fell at a slow spot, and I no longer had tires available to get back on track and make my time. But I managed to be fast with the race tires and found a good pace.”

Aleix took stock of the situation.
“I’m trying to be fast and competitive. The important thing is to finish the race on Sunday in the top positions, without focusing too much on the falls, since I also fell during the tests in Misano. Fortunately, nothing happened, even if I destroyed the RS-GP,” he said smiling.

He talked about grip.
“This grip reminds me of Brno, since there's not really much. At least it’s sunny, but you have to be very careful. The asphalt is from 2009 and, after six years, it usually tends to get old.”

And also about what they’ll be doing about it.
“I talked a lot about it with the Michelin engineers, because it’s strange. When there’s a lot of grip, like in Misano, you think you’ll quickly destroy the tires. Instead, it was entirely different than what we initially expected, so we’ll have to better manage the first part of the race by Sunday.”

Meanwhile, Viñales continues to amaze everyone on the RS-GP.
“I’m fast, too. It’s not a problem of speed at the moment, since I have to figure out what my limit is. I know I’m fast here in Aragon. I suffered in Misano and Austria, but I was aware of the difficulties of the two tracks. Now the tracks are more favorable for us.”

Finally, a glimpse into the future.
“Braking is one of the aspects on which we’ll have to focus for the Aprilia 2023. We’ll have to improve it.”