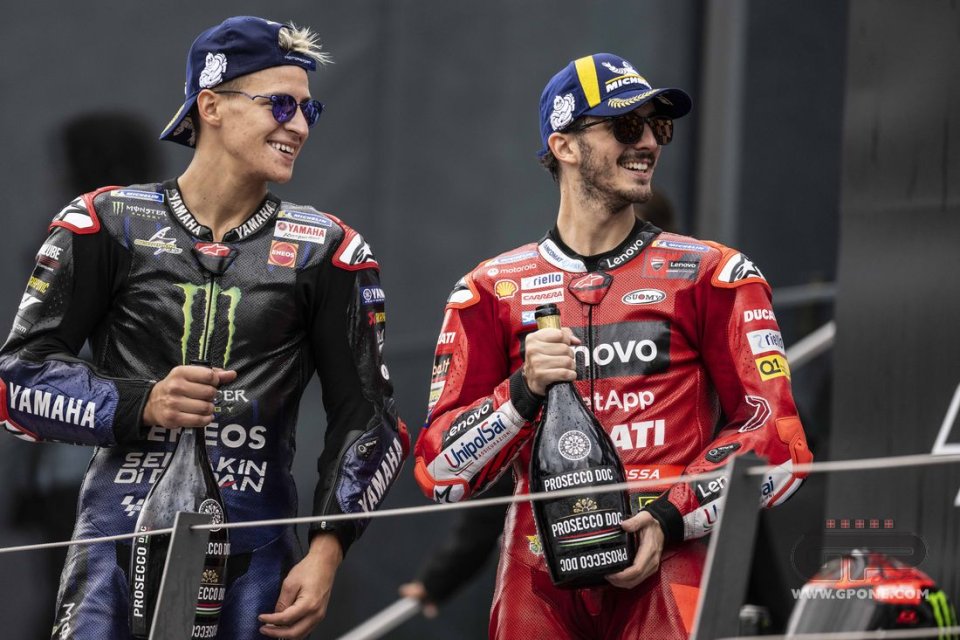 The MotoGP World Championship is undoubtedly open, with three riders in 33 points with 6 races remaining until the final curtain. The credit for such an incandescent finish must certainly go to Pecco Bagnaia, who after the Sachsenring Grand Prix (in mid-June) seemed cut out of the fight as he was 91 points down on Quartararo. An abyss, which Ducati’s Italian rider has made up thanks to a run of wins: 4 in a row, which together with the Frenchman’s difficulties, have brought him back into the game.

The numbers don't lie and in the graph below you can see how steep Pecco's climb was, which coincided with Fabio's decline. In the middle is Aleix Espargarò, who has focused more on consistency than speed to keep up with his two rivals. 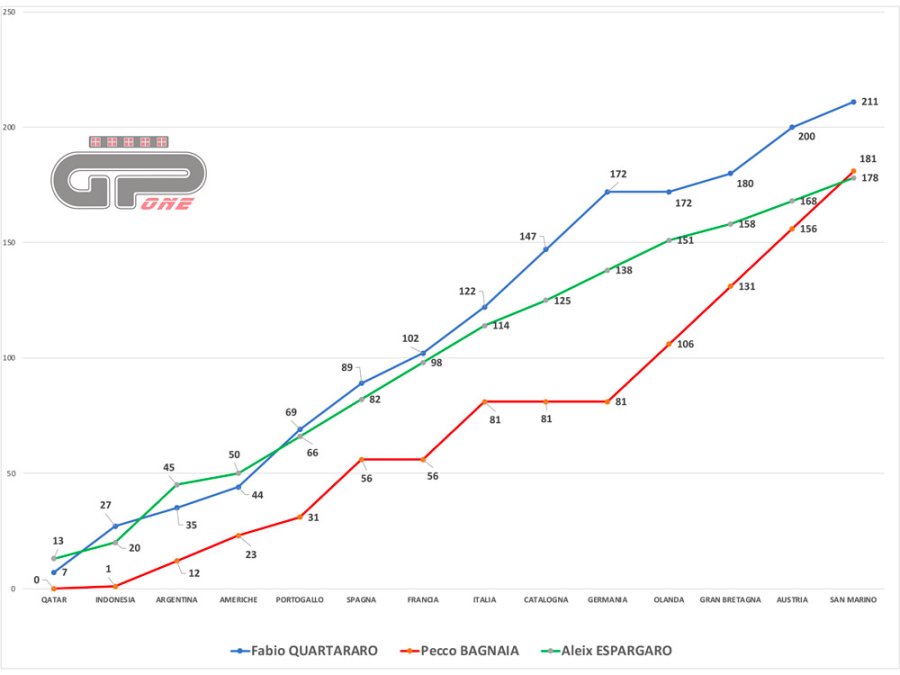 After the Misano GP things have changed for Quartararo, he still has the margin to administer his lead, but he can no longer afford to finish behind Bagnaia. If the Ducati rider wins all the remaining races and Fabio always finishes 2nd, the title would go to the Italian: it is an on-the-limit situation and difficult to achieve, but it explains well how tense the final sprint will be.

Also because Fabio is finding himself fighting alone against the Ducatis and the Aprilias, which at the moment are a step ahead of the Yamaha. The Frenchman is working wonders to keep up with them, but in every GP the list of riders who can steal points from him gets longer and longer. Like in Misano, where not only did Pecco win, but Bastianini, Vinales and Marini finished ahead of the Frenchman.

It must be said that Bagnaia, in some ways, is still ‘condemned’ to win, but now much less so than a few weeks ago. Above all, his poker of wins is giving him the confidence he lacked earlier this year. Pecco realized that in MotoGP you can win not only with your right wrist but also with your head and he put that lesson into practice.

For both, at this moment, there is only one rule: not to make mistakes. A single mistake could compromise what they have done so far and there would be no more time to recover. On the other hand, it is difficult to say who has the more pressure, because Pecco now sees his prey close, but knows that with a single mistake he would lose it, while Fabio still has a treasure trove of points, but having lost more than 60 in just 4 GPs was also a blow from a psychological point of view.

Especially since, as mentioned, the M1 is suffering and the next two races will not be a walk in the park. Starting from Aragon, this Sunday, the track where Bagnaia won his first GP in the premier class last year, getting the better of Marc Marquez. At MotorLand, on the other hand, Quartararo has never been on the podium, not even in Moto2 and Moto3, a sign that the circuit is not really congenial to him. Starting the overseas rounds with an even smaller lead would not put him in the best position.

Also because we haven't talked about Aleix yet. The Aprilia rider is still in the game, but he has not been on the podium since Mugello. Having scored points in all the races helps him, but against Bagnaia and Quartararo he needs more than that. His downward trend coincides with the upwards trajectory of Vinales (3 podiums in the last 4 races), a sign that the RS-GP has no problems and that the bad crash at Silverstone may have affected Espargarò's confidence.

Aragon, however, is a wild card for him. Even when the Aprilia has struggled, the Spaniard has always made a difference on that track, the same one where he got on the podium for the first time in MotoGP (it was 2014, the period of the Yamaha Open). If he wants to remain among the contenders, in a few days he will have to reverse the trend.

As we wait to head for Japan, when the standings might change once again.