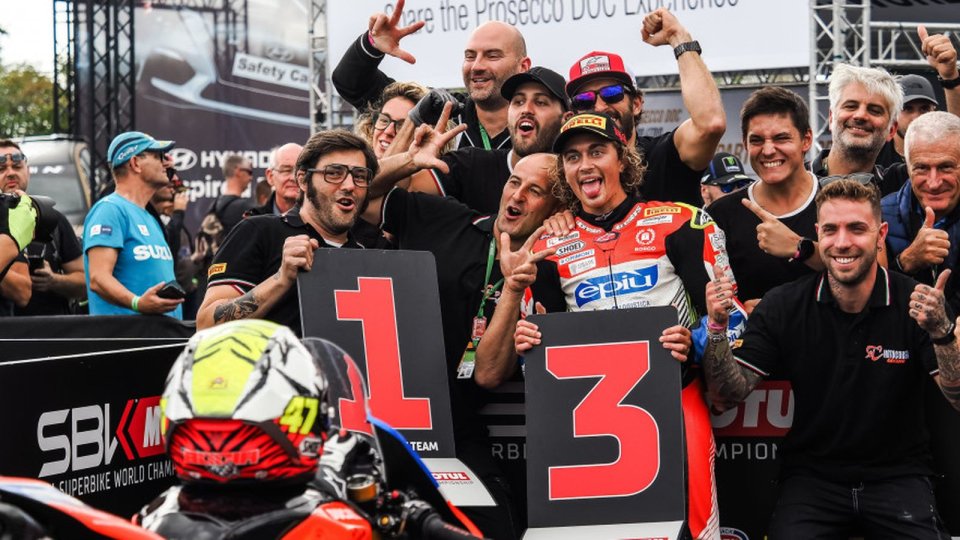 Returning from the summer break, Axel Bassani probably had the best weekend of his career in the Superbike World Championship. After having almost reached it several times this year, the young Italian rider scored two podiums (the first of the season after last year’s in Barcelona) out of  three races on the Motocorsa team’s private Panigale V4-R at the at the Circuit de Nevers Magny-Cours. Two third places that, added to his sixth of the Superpole Race, confirms the top of the ranking reserved for the independents.

“Two podiums in a weekend is something incredible for me and the team,” Axel said. “Thanks to the progress made after the Most round, we were now able to find an ideal set -up in view of the continuation of the season. We have the potential to continue in this direction.”

Concretely, how close did you come to bringing home the victory?
“A bit of  pace,” he pointed out. “There are days when you do better and others worse, but we still have to be satisfied for the double podium.”

Is the podium reachable even without the misadventures of the Bautista-Razgatlioglu-Rea trio?
“In that case, of course, the difficulties are greater, but I don’t consider it impossible. After all, I have two arms and two legs like them,” he said jokingly.

Do you think you’d be equally competitive on motorcycles like Yamaha or Kawasaki?
“I have no idea. It’s hard to say. I have great sensations with the Ducati. I do not know if I could repeat  myself on motorcycles from other constructors. Until you really try them, you'll never know.”

VIDEO - Merry Christmas from Axel Bassani: “We’re taking a break now, then we’...